Erroring without displaying error on engraving

I attempted to engrave this file (this is part of a bigger file that was narrowed down to this test case), but the Glowforge seems to error out without displaying any error message. (This is a known-bad test: I know that engraving an open path will not work properly, but it should be displaying an error message instead of silently doing nothing.)

expected results:
4. Glowforge scans the material, then gives a preview and says to press the glowing button

actual results:
4. Glowforge scans the material, then returns immediately to the layout page without displaying any errors.

This is on Chromium 63.0 on Debian/testing.

I tried rebooting the Glowforge, shift-reloading the web app, and logging out/in to the web app.

It’s a line with 3 dashed lines below it.

Is that what you thought it was?

The reason that it’s erroring out (though it should never silent error, it does) is because you are trying to engrave open paths. If you want those 4 paths to be engraved, they need to be expanded into closed objects or rasterized.

This is the outline view of your document (which shows just the vector paths). Notice that the items you want to engrave are just a single line. 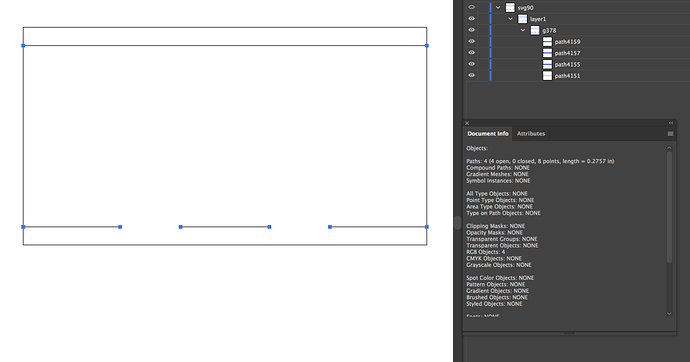 An engrave needs to be a closed object so that it defines a complete boundary for the engrave to go into. The prior action for this in the UI would be that it attempted to close the boundary on its own, usually to unsatisfactory results.

This is what they look like after expanding the stroke. See how they now have closed boundaries?

Also, noticed that they have both a stroke and a fill. The fill is doing nothing on just an open path, so that may be one other thing that is helping to confuse it.

You could also convert them to a score, but you have less control over the final appearance/size, since a score is just a single pass with the laser.

Yeah, that’s correct. I probably should have made it bigger (as I doubt its small size mattered).

Thank you for the detailed explanation! I had a strong suspicion that it was that; I converted it to a score in my final cut to get something close to what I wanted.

I probably should have clarified in my original post that the reason I was posting here was that it shouldn’t be erroring with out displaying an error message.

I’m sorry that wasn’t clear, but I’m glad you resolved it!

Thanks for the error message suggestion. I’ll make sure the team gets them.