Sorry. The original thought turned out not to be the issue. Apparently it’s a fill rule issue again for CorelDraw and Affinity Designer files.

(And apparently it’s now been resolved, so a restart of the machine will let those files be loaded now.)

I am getting this error message when I try to upload svg files. It will upload pdf and jpg files. I can open a svg that has already been uploaded, but I can not re-upload that same file (no changes to file). I have turned on the machine on and off. I have tried when the machine is on and when it is off. I have rebooted my computer. I have switched computers. I have logged out and back in. I have rebooted my router. I am on day two of this error. [glowforge%20error]

Did a little work last night with the GF but was running into incredibly frustrating recycle requirements (1 print would work, I’d move the design in the GFUI and change the parameters and then it would hang on scanning or calibrating or just kick back to the GFUI…had to recycle everything multiple times and I’d get another successful print before having to go through it all over again…wasted several hours). So I finally gave up and shut down. Tonight I went to work on a design, recycled things…

Having issues uploading SVG's from Affinity Designer Problems and Support

Having issues uploading SVG’s from Affinity Designer. It started around 11am pst. I loaded up an old version of Illustrator and exported a svg file that worked fine. I tried again on AD and nope, wouldn’t upload. I then tried a pdf from AD…that worked. What is going on with AD and SVG files? Anyone else having this issue? FYI…I can’t upload anything new or old ones i’ve already uploaded since this morning.

Thanks for collecting this in one place and summarizing your findings.

For Affinity Designer, my work document is in inches and when the document is exported as an SVG there are no options for units in the SVG export menu (as far as I can tell). So apparently the export is always defined as pixels without any ability to change it.

As a test, I was able to create an SVG directly in Inkscape which the GFUI was able to load. I do not use Inkscape regularly so that’s not a real option for me, I just did it as a test.

considering i have opened a couple of files people were saying they were having trouble with in illustrator, saved out an SVG, then opened successfully in GFUI, i think there may be something to this being an issue with the original application’s flavor of SVG.

Yeah, I think so too, but they were opening before, which means it’s possible a change made recently to the rendering program behind the scenes killed their ability to interpret the CD and AD files. I was hoping they could be converted from Inkscape but no joy.

i don’t disagree and i think being able to take the exact same file out of illustrator bolsters that argument.

Apparently removing the following from the SVG allows the file to be loaded:

Another thread also came to the same conclusion. Looks like the old even/odd rule has come back to bite us once again.

Jules, you had suggested to change the units to inches from pixels. Here is a screen shot of my export. I haven’t changed anything since I started using the glowforge. 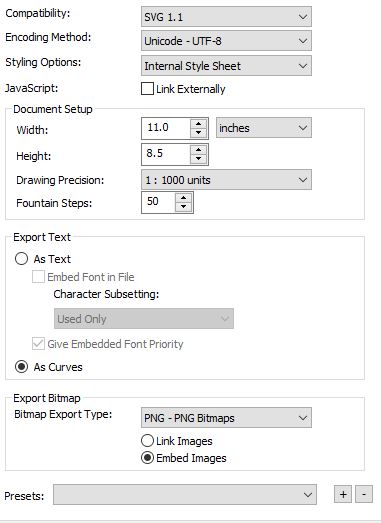 That wasn’t the issue after all. Just a coincidence that pointed out files that were originating from CorelDraw and Affinity Designer. The issue is with how the SVGs saved from those programs are interpreted by the GFUI. (It’s a known issue.)

It appears to be up and running again. It would be nice to know if this was an update error, and if so they could tell us when there is going to be an update.
Thanks for looking into it.

Oh, I didn’t do anything…they probably started fixing it a couple of days ago.

Thanks for letting us know about this. I’m so sorry you were having trouble uploading your designs.

Could you try again and let me know how it goes?

It’s working now @vee, you can go ahead and close this one.

Thanks for letting me know. Happy printing!