Hi hi…so wanted to share my first inlay project. Been wanted to play around with this idea for a while and finally took the plunge. The crystals are lapis,obsidian and apetite with ca glue as the bond. Think my first attempt came out alright. Feel like if I cleaned out the engraved part next time the crystal wouldn’t be as dark. Experiments experiments 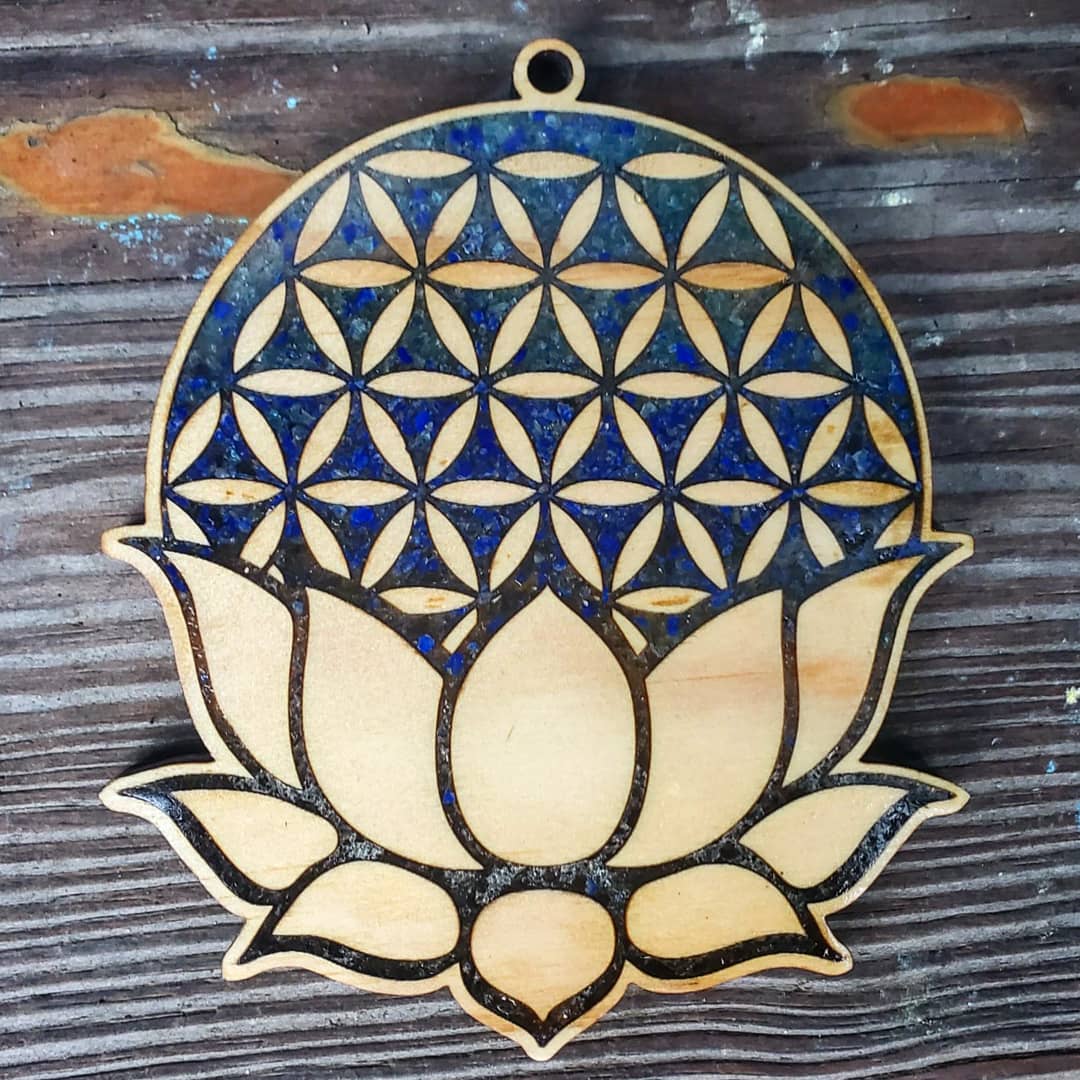 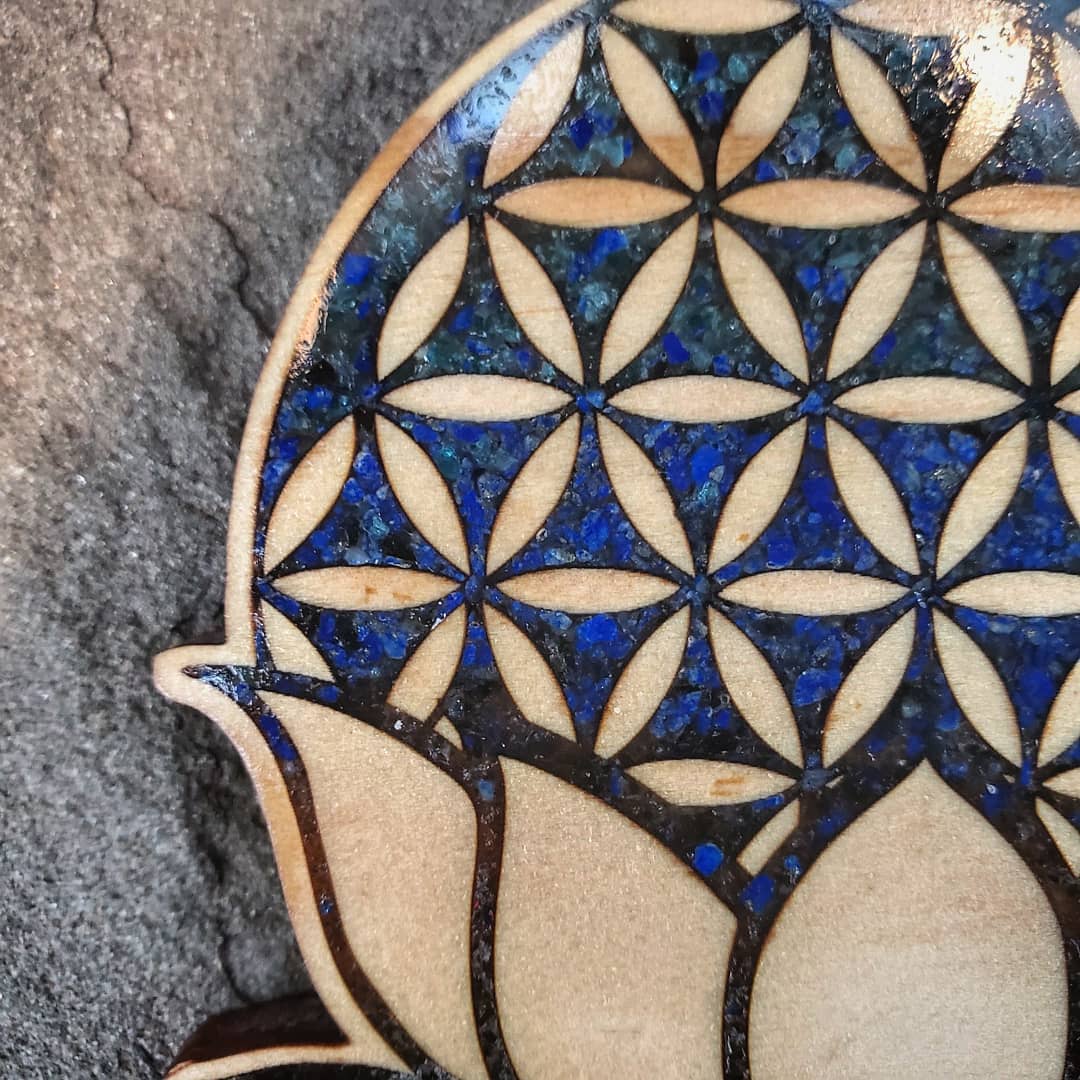 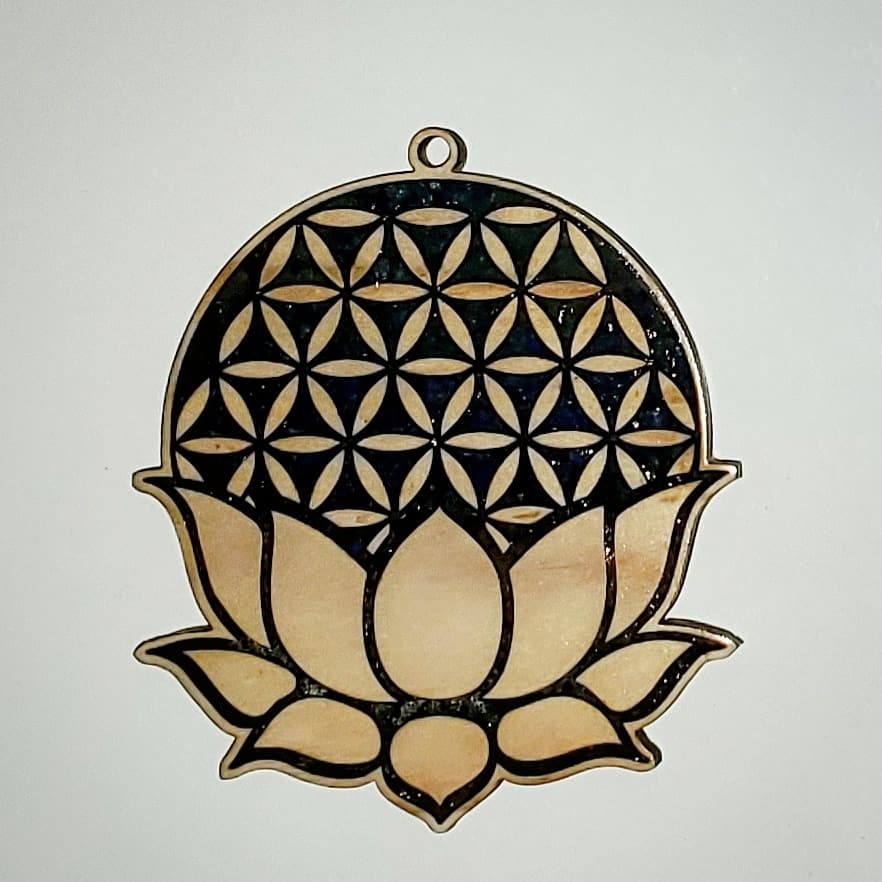 Beautiful result! (And I’ll bet that was a lot of work!)

I like it! As for cleaning it out, maybe a quick layer of white paint might do the trick too?

Beautiful!!!
Have you tried using masking, and leaving it on until you finished the inlay, sanding, etc?

Bleach can clean the engrave but only the obsidian has any translucency and is dark already.,

That looks amazing! If you don’t mind my asking, where did you get the crystal?

They are from makers minerals…found them online. Though I think I’m just going to start buying bulk Crystal’s and just crush them myself

Great job on that chip inlay! Lapis is a favorite of mine, I have slabbed and cabbed lots of it.
I presume you had to cut the surface flush, did you notice a sulphur “taste”, like a struck match when you cut it down?

Only sanded it no cutting

Lapis is a favorite of mine, I have slabbed and cabbed lots of it.

I had 20 pounds of good Afghani left that went in the bulk sale of most that I had. I once made a pin of precious coral branch set in gold with a carved Lapis fish, and everyone thought they were plastic.
My first gold ring I made for myself was not set well and came unset so it went into my pocket, where it fell out as I put out the garbage. the ring of course was grabbed up by the first passer by but the more obvious stone was left as I guess they thought that was plastic also.

I cut some giant cabs out of a fist sized piece of Afghani that had zero matrix in it for a friend who’s Husband was a world traveled geologist that got it there. First I ever saw that didn’t have any white matrix.
Working it, did you ever notice that smell I mentioned? I always worked on a multi wheel wet grinder, so I was surprised every time I cut it the sulphur taste was there.

every time I cut it the sulphur taste

That is probably because Lapiz is sulphurized marble, If you seep sulphur into limestone and metamorphose the limestone into marble you have Lapiz. They have even made artificial Lapiz that way but only the outside is blue (I think) as the saturated limestone takes more work to make into marble.

A neighbor of a friend showed me a piece that was originally over 20 pounds that was carved into a herd of horses running up the side of a mountain (probably Chinese), that had been dropped and broken and he had been given it promising to repair it and it was mostly done though a few small bits had been lost.

Since then he had had severe medical setbacks so I cannot even look at it again. I would so much like to even get a series of photos to stitch into a 3D model if nothing else. I don’t think he had any idea, or cared, about its financial value as it might exceed that of his house.

If you seep sulphur into limestone and metamorphose the limestone into marble you have Lapiz.

Thanks for the education. There was never any doubt that sulphur was involved. Lapis seems a bit softer than marble. A stone better suited for a pendant than a ring because any stone on your hand is subjected to more abuse.

Harder I would think but that would depend on the specific source of either, I have seen photos of if it carved into architectural columns for Russian Royalty and those horses noted above were obviously carved with marble tools and not what you might see in jade. Still I would say definitely more consistent than good turquoise but the same range and interchangeable in most cases.