Do you live in a smaller living space than is probably a good idea to have a Glowforge in? Where there’s just no way in hell you can hang onto the giant box and all the foam you’ll need to move it within your actual space? Yeah, me too.

Luckily, we have a storage shed out back where we keep our bikes and stuff like that…but there wasn’t enough room to store it on the ground of the shed. Cut to: Me at the hardware store staring at some ratchet straps 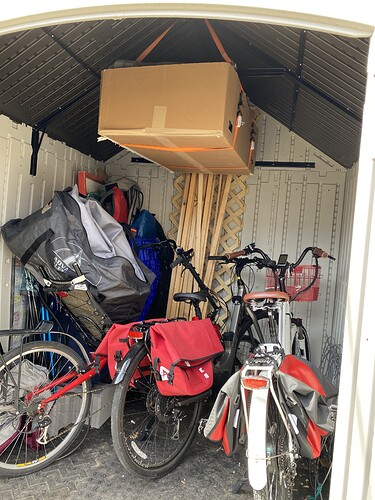 It’s light enough it’s not really putting proper strain on the crossbars or the top bar, and it’s high enough up that we can get our bikes out without constantly smacking our heads on it. Win!

A great idea, but I would worry about one thing that would depend a lot on where you live. I was keeping a lot of stuff outside in Florida and most stuff was just fine in the garage but where humidity could damage stuff it did. Cardboard boxes (most full of stuff) did not get so much damp as soft. Even then not a huge problem for most situations but not the state I would want the GF box to be for shipping. But then your situation may differ.

Looks great. That box is so big, it’s hard to find an out of the way place for it!

If dampness could be a problem, what about wrapping garbage bags around it? It would probably take several cut into pieces and taped.

It would probably take several cut into pieces and taped.

Two of the really big trash bags taped down would do so as one would be more than 2/3 of the volume.

Definitely a fair concern in Florida. We live in Wisconsin where humidity is far less of an issue

I agree, great solution. The more stuff we get the harder it is to find nooks and crannies for storage.

there wasn’t enough room to store it on the ground

I stuck mine up high in the attic. Only place I was willing to give up that much volume
Probably too warm most of the time up there for this. I have a suspicion it will be a tad brittle when time to use. I suppose I can always laminate it with duct tape if it does brittle up.

Goal is to never use it and avoid that.
Outside has it’s own issues as well, so you may want to try my solution and imagine you will never need it or stock up on duct tape.

Great thinking! I finally managed to get mine off the accessory table and onto the basement shelving. I was so excited to have that space on the table.

Yeah we have neither a basement nor an attic, which are probably better places to put it if you have those spaces.

or stock up on duct tape.

I mean that’s a good thing to do no matter what, but yeah, we have a metric ton of packing tape left over from our last move which should be able to hold things together if needed.

Honestly thinking much less about shipping than when we next move, as we’re renting. I do not super look forward to that bit.

I don’t want to think about what would come scurrying out of that box after storing it in Florida.

scurrying out of that box after storing it in Florida.

Arizona would be worse, Cats, raccoons, possums, and armadillos keep the number of smaller critters in line and most are not poisonous, where in Arizona most are poisonous, but there is less weathering there.

I’m not here to adjudacate Florida vs. Arizona (though I am here to watch this fight with popcorn). However, I think we can all agree that this would also be a bad idea if you lived in Australia, where the array of things that can kill you is truly astonishing.

if you lived in Australia,

True, but I have lived in Arizona, and Florida and not Australia