Dang it, that’s an hour wasted :-/ I don’t need official support and just posting it here for community input.

Can someone see if there’s something I’m missing in my file? I can’t figure out why I got the mis-engrave on the ship (see the clear space about 1/4 down the engrave.) I made a vector of the starship and then converted to a bitmap for the engraving. I don’t see anything wrong with it, but clearly I’m not seeing something. I suppose it could be warped acrylic maybe? It seemed flat when I placed it, but can’t think of what else might have caused it.

(Oh, the starship graphic is not mine, please don’t use for profit.) 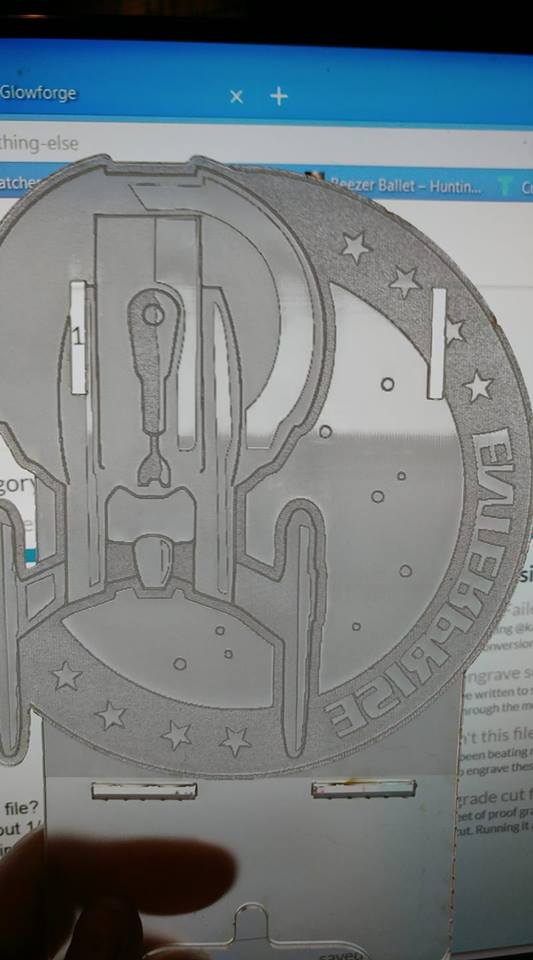 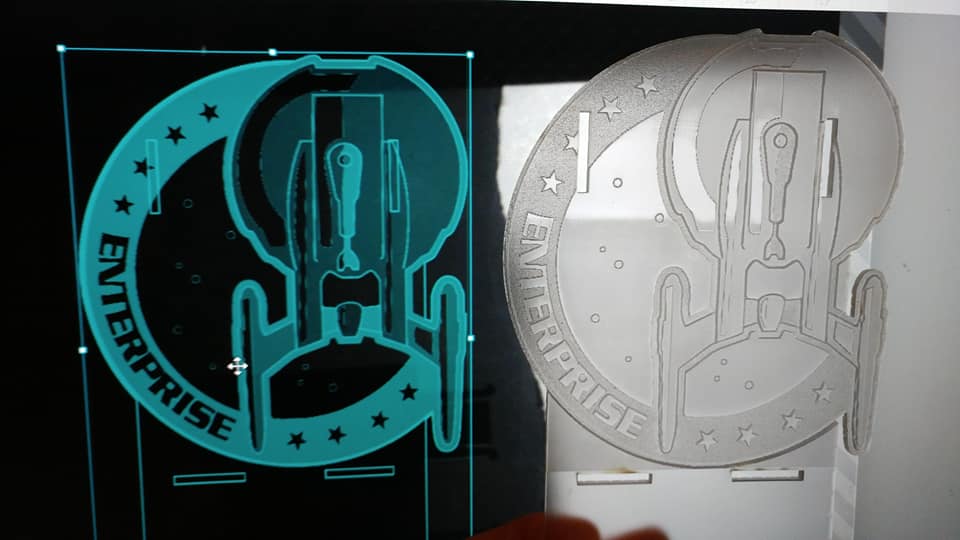 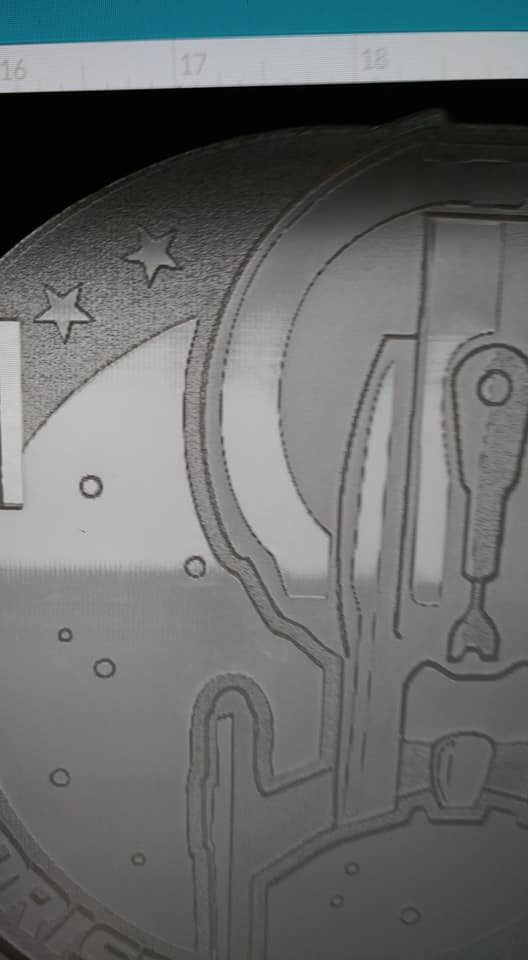 It imports into Illustrator with a clipping path, which is just going to do weird things most of the time. 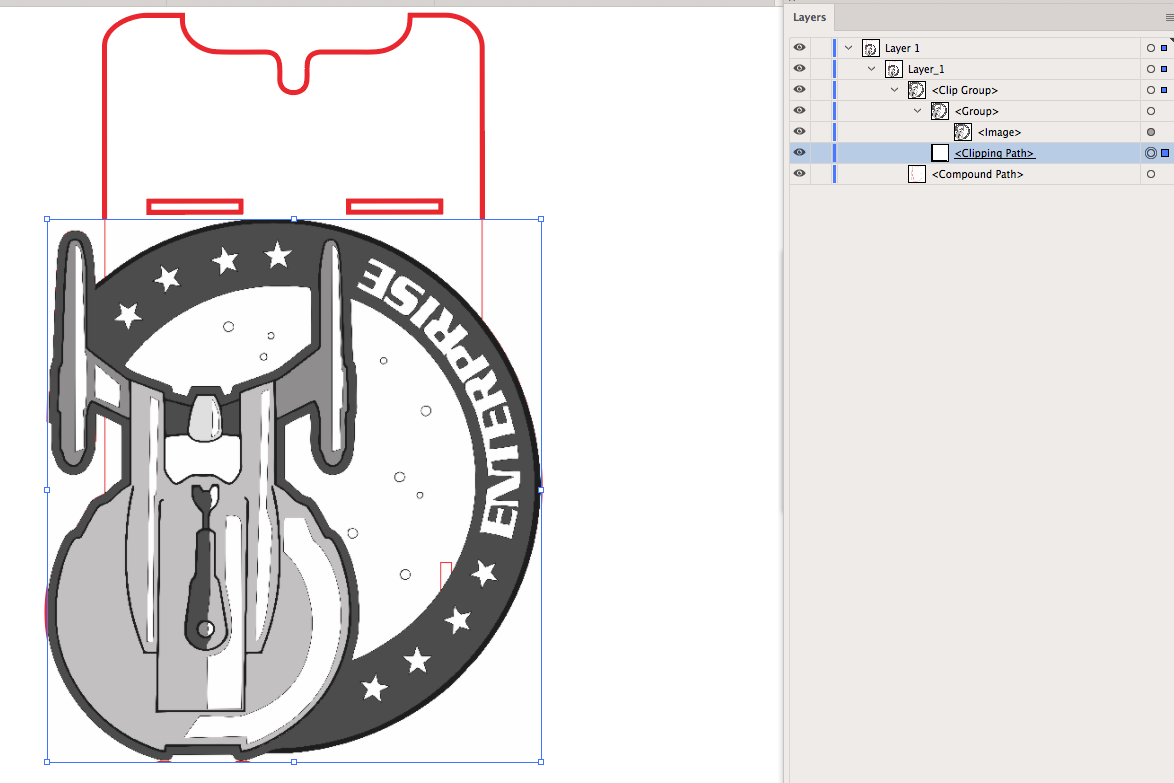 I’d get rid of the clipping path and see what you get.

Also, it looks like when it was rasterized - it rasterized some bits of your cutout lines along with it (the little red lines that in this screenshot: 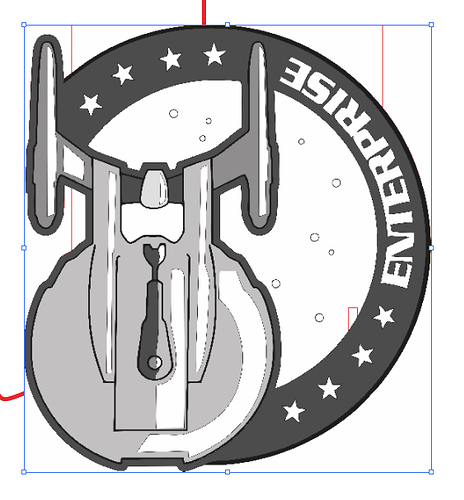 I have to admit, I have the reverse surprise. I expected no pews wherever the raster is white. So my guess was that there are some barely non white pixels there. But my cursory examination didn’t find any.

This is exactly what I thought would happen too. I thought it wasn’t going to engrave the background at all. I wasn’t surprised I was wrong about that, but I still couldn’t figure out why it skipped the whole area in the middle.

It’s a long shot but try removing the clipping path and moving the image to be engraved under the cut lines. I loaded it that way and it looks pretty much just like the image in the preview. 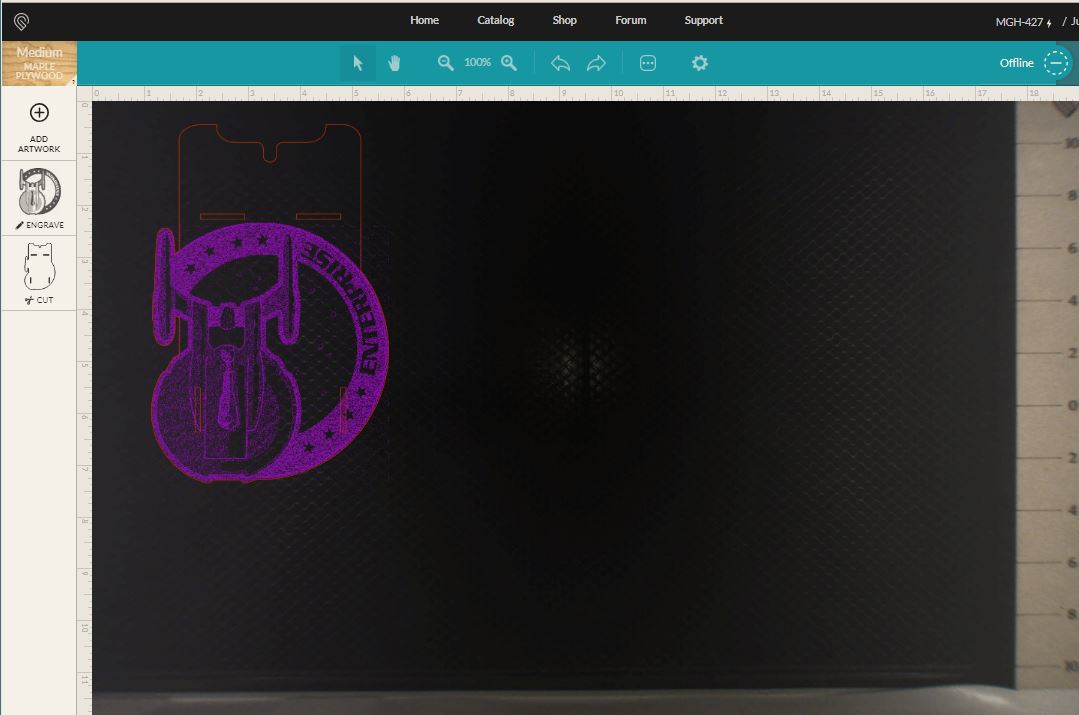 And the white isn’t white - if you zoom in on the preview there is some tint in there…if you can delete that it will equalize the background. 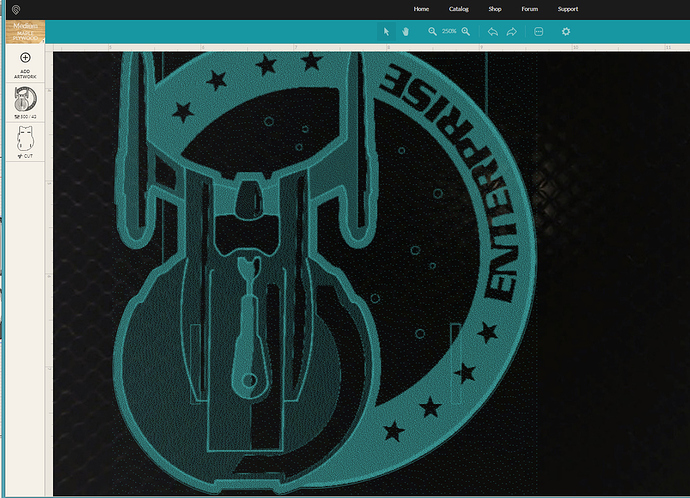 But why did the engraving skip and entire section and why the weird banding at the top of the area? If the glowforge is engraving the background, what caused it to skip just that one specific
area? 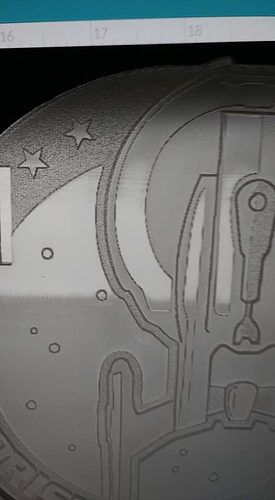 I can’t entirely but i know the software is trying to remove the existing clip path, which causes it to attempt to interpret what the clip path is doing in the file. I would try removing the clipping path so you’re starting with the cleanest iteration possible. Easier to troubleshoot that way, a thing least.

I looked at the embedded bitmap. Perhaps the clip path did cause some issues. But that particular image’s quality makes me wonder if something is in the bitmap that we can’t see. It’s like it has a bit of a greyscale on the top edge and bottom edge. That may be an artifact of the Glowforge processing or it may be something in the file.

Perhaps it is something in the masking that interfered with the pews.

Above you said you made a vector of the star ship and converted it to a bitmap for engraving. You mean you started with a full vector with closed filled paths of the ship and the big circle with stars? If you had a vector to start with of the design, why not just engrave it as is, or did you want to take advantage of a grey scale engrave. The resolution of the bitmap isn’t very high, but assume that is because you didn’t want to make it big. Could there have been something in the design that got transferred from the original export of the bitmap?

Of course, it could be just an error on the Glowforge’s part. Just haven’t seen anything like this that can’t be traced back to file artifacts.

I notice in @kittski’s images the Enterprise is pointing upward but in the file it’s pointing downward. I’m guessing that means the image was rotated in the GFUI. That, obviously, shouldn’t be an issue, but it’s a possible contributing factor (because “beta”).

The Glowforge engraves bottom-up, right? And the color of that part of the image is very close to, but not quite, white. That shade of white/gray might be right at the precipice of where the laser will no longer fire (where it’s not even strong enough to stun). Also, that point (where the laser just barely turns on) might be affected by the temperature of the tube/power supply/who knows what else. I’m guessing that as the image was engraved the machine slowly warmed up and crossed a threshold temperature wherein the laser would not fire at all from that very light shade of gray. At that point it stopped firing for that color and therefor the system started to cool slightly. Once it cooled enough it basically got its second wind and started firing for that color once again and finished the job.