I’ve found some threads related to this but these images were taken from the GF import artwork link. I placed a outline around the rabbit and resolved the error but when I added the squirrel I received the same error even after adding a outline to the squirrel. I imported the image into CorelDraw and tried exporting the file as a jpg bitmap and png bitmap but no luck. Any ideas? Rasterize is not a term used in CorelDraw that I could find, but I’m sure it has the same function. Thanks! 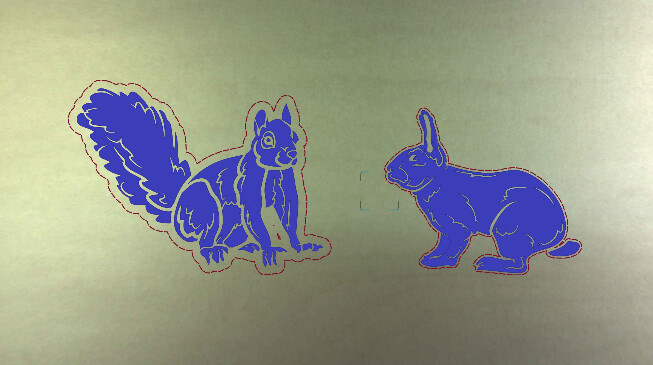 I’m not familiar with CorelDRAW either, but maybe this helps:

http://product.corel.com/help/CorelDRAW/540240626/Main/EN/Doc/wwhelp/wwhimpl/common/html/wwhelp.htm?context=CorelDRAW_Help&file=CorelDRAW-Converting-vector-graphics-to-bitmaps.html
(which is what I found searching for, “coreldraw convert vector to bitmap”)

I see that there is a bit between the front legs of the squirrel that could be causing the problem. what I do in such a situation is add a rectangle covering the space and then pull the outline of squirrel and box which will not go where the box goes. After that, you can even delete the box and the outline will not go there. you can even add the rectangle through the feet and it will f=leave the bottom flat that you can use as a base.

Thank you both for the feedback. I was able to convert to bitmap and resolved the issue. I was able to follow the steps for boxing as well. It worked for the rabbit but the squirrel image would not give in. (as squirrels never seem to give up that nut) Have a great week!