Finally got around to finishing up my orrery! This pic is perhaps not the best, but I’ve mounted the dang thing so securely that now I’m a little nervous about taking it down off the shelf (earthquake country).

The knob is from a Telecaster, and if you look carefully you can see I’ve inscribed the wooden surface with some additional information, like the line of galactic rotation, the direction of the galactic core, and the general flight directions (not flight paths) of Pioneer 10 & 11 as well as Voyager 1 & 2. There’s some additional gilded details directly under the main planet gear stack that can really only be seen in person (I like to hide things). 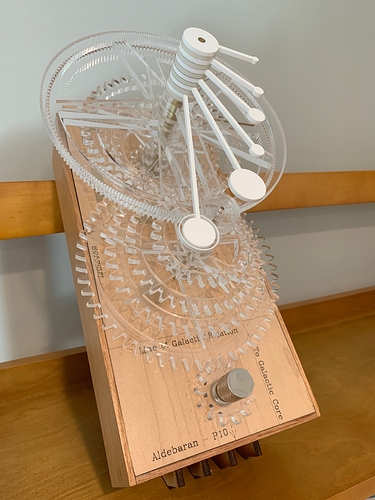 All of the gearing is .24" acrylic, with the planet arms being white 1/8" acrylic supported by delrin spacers and .007" polyethylene shims (I wanted intervening materials to be both low-friction and highly glue-resistant, just in case).

Main box was something I already had, but the top plate was lasered. Additionally, buried inside the main box is a layer of plaster (for weight) and a surprisingly complex bearing assembly composed of delrin and acrylic (making a bearing assembly, using only lasered materials and a brass rod, that can carry loads in multiple directions was somewhat challenging).

The planets only go as far as Saturn for two reasons:

I still haven’t decided if I’m going to include a sun disk at the center of the planets, which is why you can spy a bit of the brass support rod at the center. I’m thinking I may cap it off with a nice wood disk, or possibly thin polished brass, but I’ve decided I’m going to live with it this way for a while before making a decision.

Also not shown: about eighty zillion weird little assembly jigs and the like, all cut from cardboard

That is amazing! I love this!

That is incredibly cool! I seriously love those things…maybe when I retire

What they said! These seriously fascinate me! Great job!

This is an incredible piece! We need to see video of it in motion.

Hmm – I’m not super-familiar with video, so I’ll have to see what I can come up with …

Beautiful! Congratulations. I love it.