Firing points at a surface

How can I fire zero dimensional points at a surface?

To be clear, here’s what I want.

Neither vector nor engrave mode appear to have this capability at the moment. I can make a very nice small circle, but it has the problem that the center of the circle has a kerf that overlaps itself, and burns all the way through the material.

How should I do this? I’m not even sure it’s expressible directly in SVG. Perhaps a poly line with a start and end at the same location? How would I control duration?

Duration here is equivalent to speed in other modes.

Why do I want this?

For halftoning; perforating; and small typeface features, used in combination with defocus to deliver width.

Yeah I’m not sure any of those capabilities will be offered. They are definitely not available now. (Sorry.)

Defocusing is possible and does an excellent job of widening your beam width. For halftoning, your best bet is to pre-create it in your design software of choice.

Duration is currently a function of distance and speed.

I’ve been wanting this same feature, for marking out holes that would be more conveniently done on a drill press than with the laser. Best I could come up with was scoring a tiny circle, but it would be ideal, as you say, if we could prevent the laser carriage from moving at all.

Have you tried scoring a single vector point? Yesterday I ended up with some extra dots on my project because I didn’t clean up my art properly and had some stray points. I didn’t pay a ton of attention because it was a mistake, but the head didn’t seem to move while it was zapping each point.

This would be the only way to go about it. You can’t specify dwell time but you can control the power and number of passes.

Edit: always a good idea, if you’re using Illustrator, to go into Object > Path > Cleanup. It will get those stray points.

Yeah, I am usually v good about Cleanup but just got lazy during one of many experiments yesterday. Can’t say I regret learning about the single point score, though.

Can you attach an example file with stray points in please? I’ll take a look at the svg.

Unfortunately, I already cleaned up the file that had the stray points – and I can’t seem to recreate what I did before. I’m trying to put together a file in Illustrator with a few stray points and an ignorable bounding box but when I load the svg into the GFUI only the bounding box prints. Maybe @jbmanning5 can help? Not sure what I’m doing differently than yesterday.

You can force one by just clicking with fhe pen tool and hitting escape. Make a line and delete the second point. A click with the pencil tool might do it also.

Oh, I know how to get the stray points, I just can’t get them to show up when I save as svg and load them into the GFUI.

The longer the burn in a stationary spot the bigger the spot.

How useful that is would be dependent on a user’s specific use case.

So the smallest step the GF can do is roughly 1/1300" aka about 0.02mm. So if you made your circle that size the gantry wouldn’t move. OK, maybe one step.

The power would be weird because of the slowdown thing, but you could just do testing and multiple passes to get that right.

I think that from a point of view of control @dwardio is right about engraving a dot, probably raster engrave, also probably multiple passes. The beam would be on for a known (ish) length of time depending on how many zooms you did the engrave at.

Here’s my understanding from photography (which may not be the correct analog here): 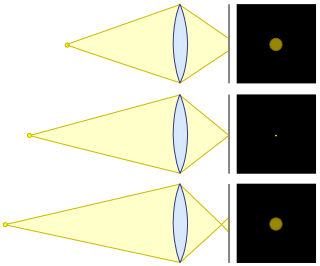 In optics, a circle of confusion is an optical spot caused by a cone of light rays from a lens not coming to a perfect focus when imaging a point source. It is also known as disk of confusion, circle of indistinctness, blur circle, or blur spot. In photography, the circle of confusion (CoC) is used to determine the depth of field, the part of an image that is acceptably sharp. A standard value of CoC is often associated with each image format, but the most appropriate value depends on visual acu...

In idealized ray optics, where rays are assumed to converge to a point when perfectly focused, the shape of a defocus blur spot from a lens with a circular aperture is a hard-edged circle of light

This means the burn depth will be approximately even across the circle.

Rotating, as to form a circle, on the other hand, produces an effect where the intentity of the laser is highest in the center, where the beam touches for 100% of the cut. This will form a deeper central cut with a decreasing intensity towards the edges, where the beam spends less and less time.

In my case, this central cut punches all the way through the material, which I do not want.

What about a single pixel raster engrave with multiple passes to control the duration?

It’s many times slower than a point operation would be.

@Jules is correct that we don’t have a recommendation for this. I’m going to move this to Beyond the Manual so the discussion can continue there.

I have discovered that dynamic inset in Inkscape does not eliminate the circle but can make it less than a pixel. if you had larger circles properly situated and used dynamic inset they would appear to go away but I suspect that the laser would go there and pause as they remain in the data, I was having them where I did not want them and it was a huge pain to find and eliminate them but as stitching holes they would work perfectly if as I suspect they would make the travel to the GFUI.