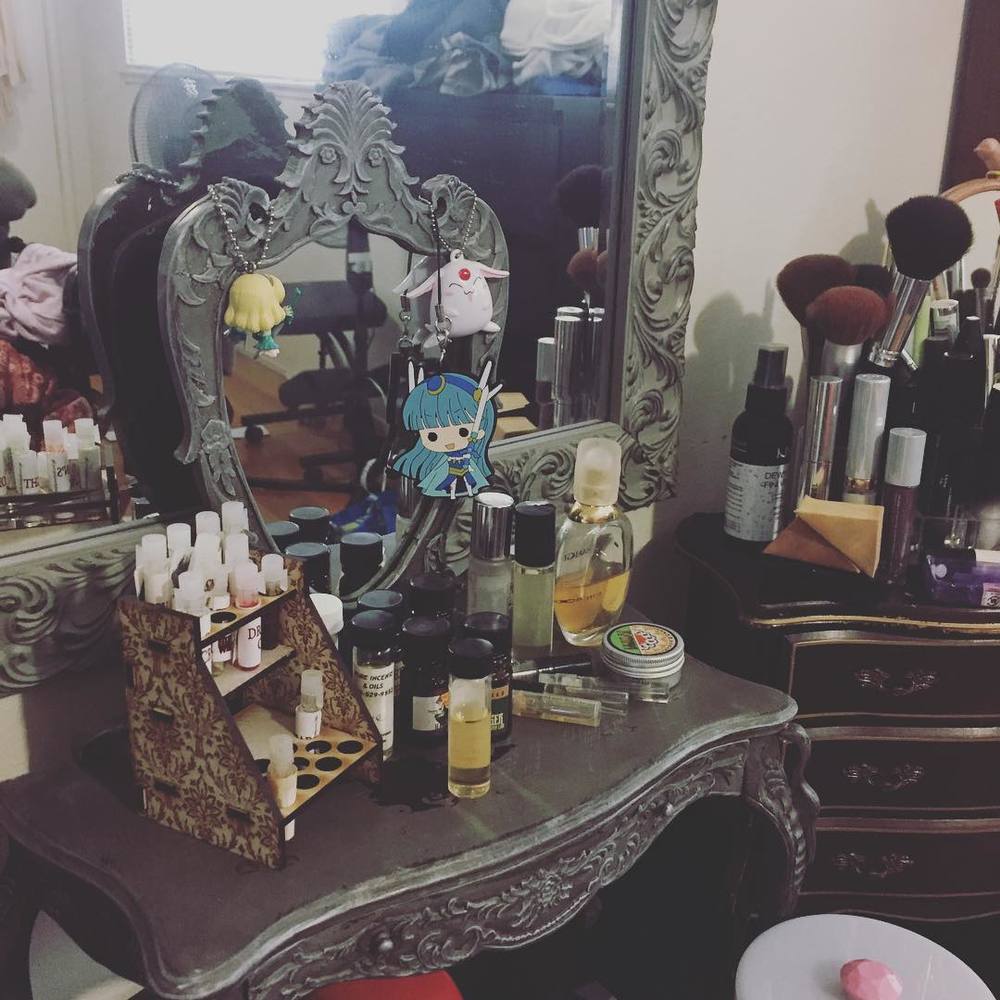 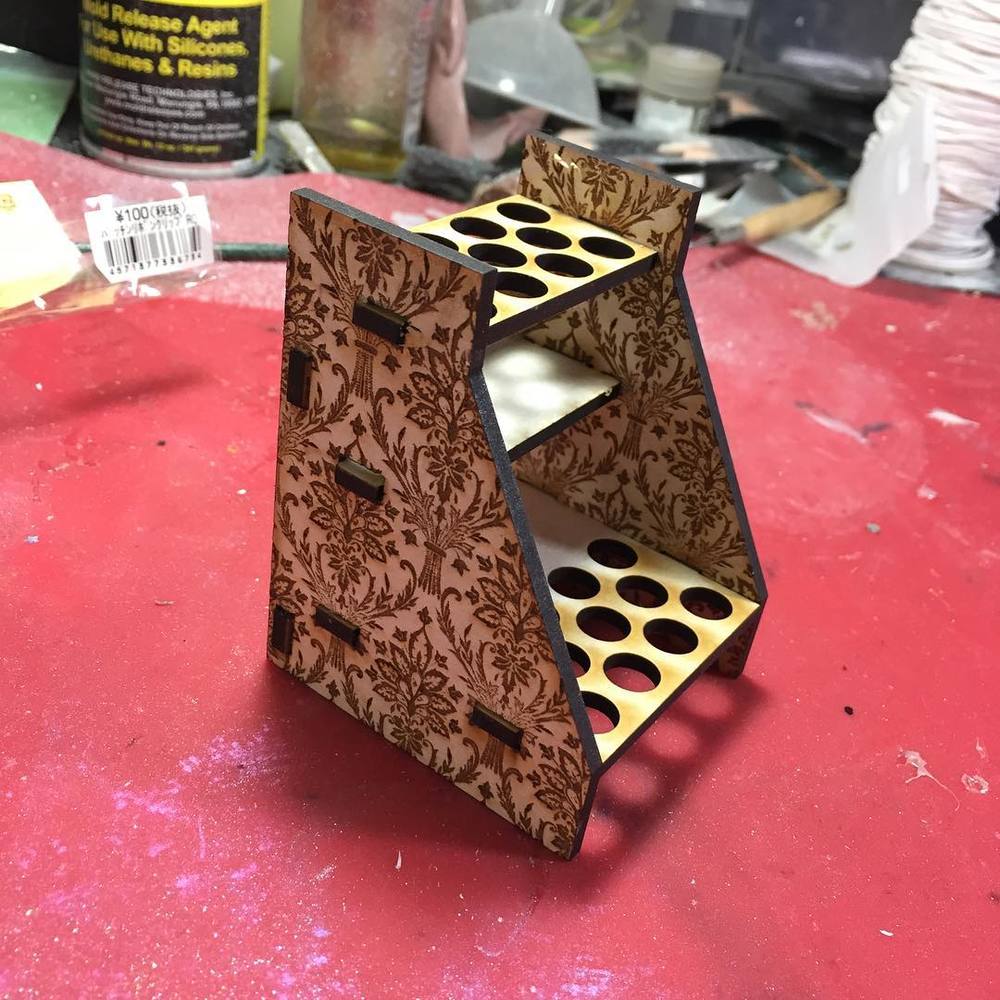 So one of my imp bottles leaked, the lid cracked, and it ruined the surface of one of my painted jewelry boxes(but i like how it looks still). So I decided to make a holder for the stupid things so I could keep better track of them and they didn’t roll all over my table!

Now I can make a more informed decision about what scent I’m trying on(the one i have on now smells like cookies!).

I used the box generator’s shelf option to work out the initial design, then I used that as a pattern to mock it up in Maya. I have dyscalculia, which makes it hard to hold numbers in my head, so it’s easier for me to make a mock up in Maya to understand what I’m making. It also means that I have trouble with my right and my left and I felt stupid for years because I’d always make wrong turns!

Anyway, then I found a random wallpaper print from the 1920’s and used that as my engraving pattern. I really love the way the burned parts look, so I ended up not peeling off the excess tape. It’ll probably get dissolved by the oils on the vials eventually anyway, but i like the way it has an aged look now. it matches the aesthetic of bpal, which is where all these came from.

I’m really pleased by this! I did a couple tests of cardboard and a smaller sword holder for some toys, but they were super basic compared with this. The engraving took about 40 for all four sides, but the rest was really fast.

It looks great! it’s great that you’re creating and cutting your own designs.

They do a lot of scents that end up smelling like foods, but I couldn’t tell you which. For halloween they used to have one called “Sugar Skull” that smells like fresh sugar cookies. And their Dwarven Ale smells like butterscotch- my husband loves that one. A lot of their themes are books and novels, like the Labyrinth collection or the Last Unicorn. They used to give out “imps” which are the small decanters, with every order or you could buy them separately… but not as much any more. They have an open house every full moon down in LA, I always mean to go but I’d have to schedule a trip down there. Since they’re oils the smell changes a bit with your body chemistry so I’m always careful to get a sample if I can.

I love perfumes that smell like sweets tho… I have one that is bubblegum and one that’s mostly clove oil. I need one that smells like grape bubblegum now!

The one I have that smells like a cookie is called Perversion. I’m sure it’s meant to smell heady but on me it smells like Snickerdoodles, haha!

The worst is that it’ll be ten or fifteen minutes before I realize I said right and meant left. Dyscalculia isn’t really talked about a lot, people just assume you’re careless or stupid at math. It wasn’t until I was in my 30’s that I figured out what was going on. I’m glad I did! It’s made a big difference. I try to find alternatives to things i can’t do instead of trying to brute force myself into doing things the way I was taught.

Excellent design! I like the curves and the two staggered tiers.

Very practical and attractive! So accessible with a minimum of dresser space.

Being left handed means I strip threads on bolts regularly, arrange my workspace so that’s its unusable to the others, use scissors improperly, etc.

That with a touch of OCD/ACHD means don’t move my stuff!!!

I want to add some really curvy things to the top to make it more special looking I think. I just didn’t have the energy to design that this weekend, ha!

Right?! Half the reason that I got the laser was to make myself custom shelves to cut down on all my clutter. I need to make some for my workshop and stuff. Probably make some for the husband for his paints. I think he’d like that.

Very nice to have two levels … Looks nice with the engraving also.