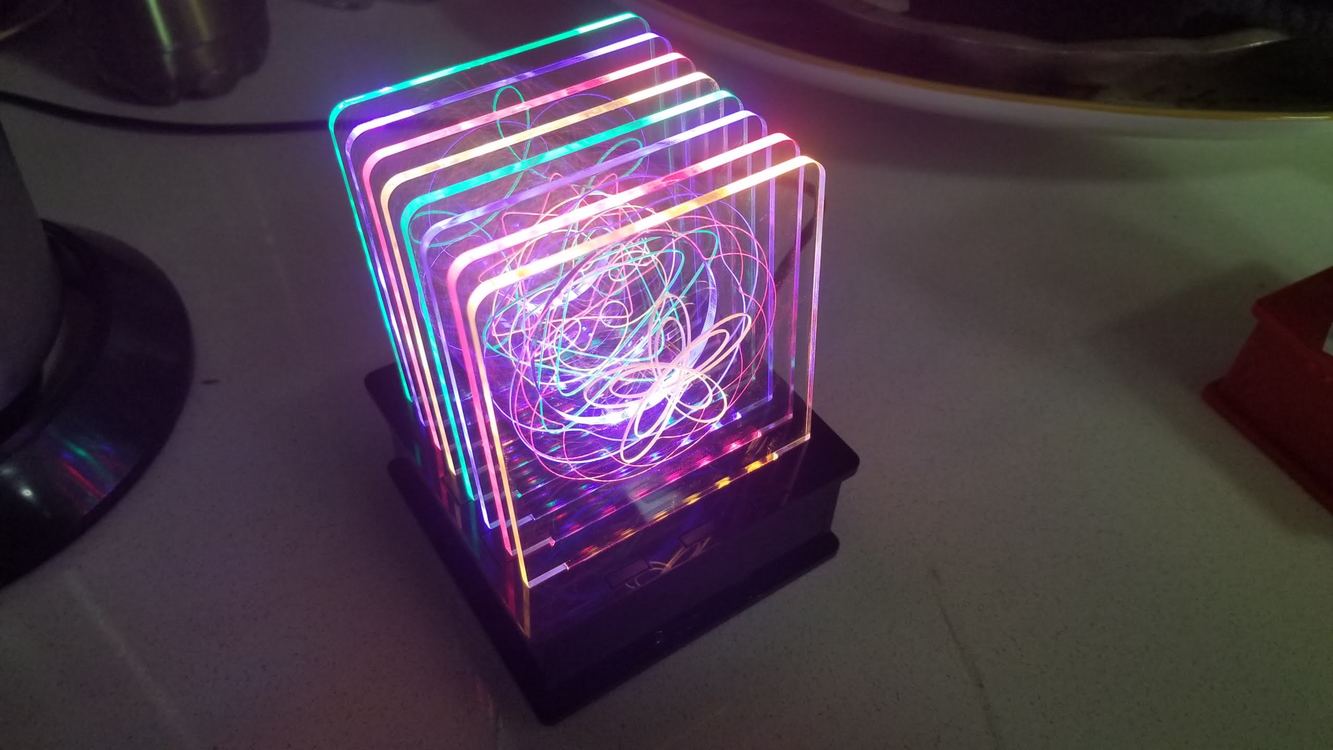 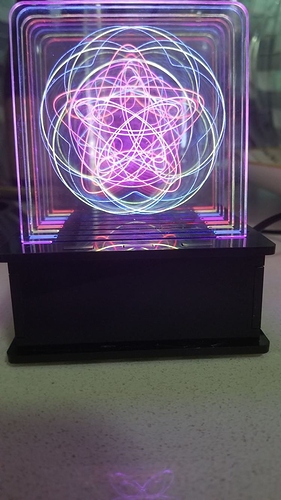 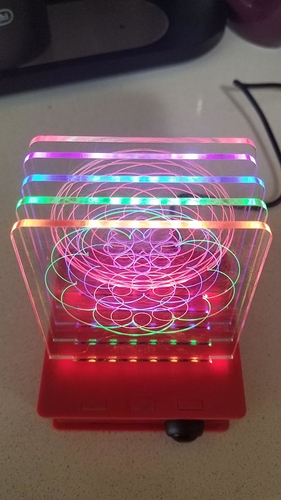 That’s really cool looking. Reminds me of the tiles that they used in one of the Star Trek series to control the computers.

the panels can be removed and reordered. If I make another, I will close up the gap a bit so they sit straighter.

So friggin’ beautiful! I don’t want to pry too much, but to confirm, you have five different colored led strips in there? Was that something you put together? 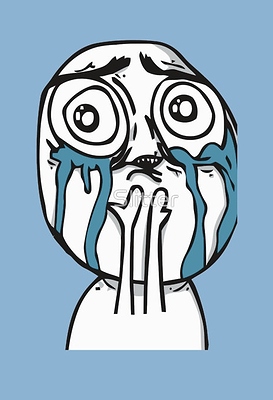 Very very cool! Would be cool to have each LED on a timer so the total design changes constantly.

The light source for each is an led panel made by Adafruit. the smaller one is 5 rows of 8 and the other is 8 rows of 8. I love Adafruit as they have helped me learn so much over the years. That said, their stuff is pricey. So an 8 x 8 panel could be sourced for less on the interwebs vs the Adafruit price for similar (but you get no support and that matters). These panels are not smart. They need a brain, so there is a tiny microprocessor board in there as well that feeds the panel with the info needed to coordinate the lighting and some custom code had to be written to run the thing. I use a tiny arduino compatible board called the trinket pro (also from Adafruit but there are tons of options out there). The program on the brain tells the LEDs what color to be. They can all be the same, or random, or slowly fade across the color spectrum as one of these photos shows, or have each 4th row be the same and have the difference between rows be a constant difference in color and have the whole thing slowly move through the color spectrum (which is what the bigger one is doing). I added a button to allow some control as well. long pushes change the brightness (off to full bright in 5 steps). short pushes change the pattern playing on the leds as described previously.

Actually, it does that already. driven with a small micro-controller. the videos are short and the change is subtle so it is hard to see.

Up until now I’ve looked at these and thought, oh that’s nice, ooh that one is cool and simply moved one with my life. I have enough projects. Now I think I need one of these on my glowforge. Thanks a lot for another project.

notes on the files. I made the bottom the same as the top to let some air in. LEDs while efficient , still make some heat. holes on the end panels are for power and a push button. all the spirographs result in 5 or 10 lobed items, which seems to work.

Gosh, very generous of you to share–thanks!

These panels are not smart. They need a brain, so there is a tiny microprocessor board in there as well that feeds the panel with the info needed to coordinate the lighting and some custom code had to be written to run the thing. I use a tiny arduino compatible board called the trinket pro (also from Adafruit but there are tons of options out there).

Thanks, so generous of you to share the info! I so admire people that can do electronic stuff. I am pretty creative, can handle mechanics pretty well and some other skills, but my brain read “…they need a brain” and the just shut down. I don’t know why, but wiring and electronics make my head swim. Typically I get around it by buying pre-made items and rip them apart to get the working part I need lol. Knowing what I’m looking for is half the battle though and this info is very helpful.

Thankyou very much this is really awesome

Thanks for sharing! Projects combining LEDs and acrylics has been on the brain for quite some time, but I hope to get started soon. I’m a total newbie when it comes to electronics, but I recently discovered Adafruit and their tutorials are worth the price of admission for someone like myself. Great job!

Thanks for sharing this! The Adafruit board is exactly what I was looking for for a project I have kicking around in my head!
I was thinking of doing it with LED strips with resistors in line to change the color. But I’m a mechanical engineer, and I would rather use something already built then try to figure out the right resistors to use.

Thanks for these files! I’ve started to put one together… trying to keep my short attention span on it long enough to finish the project. 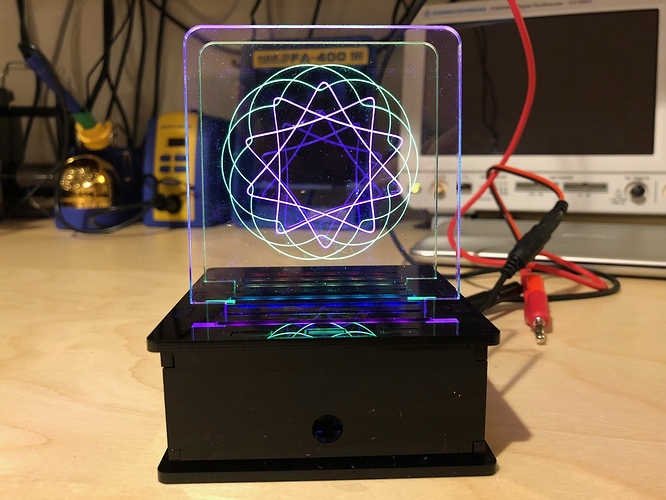 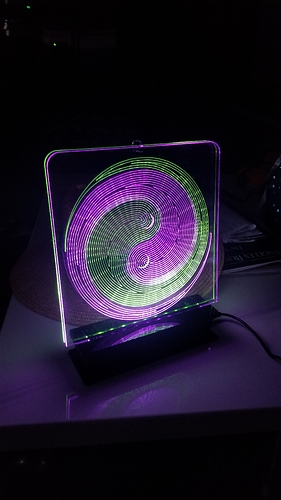 Variant with 2 bigger plates. In an scored format (a test to see how it looked vs a much longer engrave of the same shape). Strips vs. a grid for LEDs.