For our English friends

Once again The Ashes return to their rightful home.

The words appear to be in English, but I have no clue what any of it means.

Oh, thank goodness. I thought I was having a stroke.

I gave up on cricket after Botham retired as I needed to focus more interesting matters such as watching paint dry and ruminating on the very nature of existence.

I jest of course.

I learned everything I know about cricket from Life, the Universe and Everything by Douglas Adams.

sigh Cricket, you heathens!
It is the game that God and the Buddha would play (if they were good enough - FYI, they are not).

‘The Ashes’ is a Test Series played between England and Australia every 2 years.

The term originated in a satirical obituary published in a British newspaper, The Sporting Times, immediately after Australia’s 1882 victory at The Oval, their first Test win on English soil. The obituary stated that English cricket had died, and “the body will be cremated and the ashes taken to Australia” 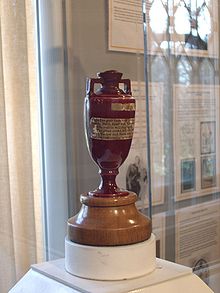 The Ashes is a Test cricket series played between England and Australia. The Ashes are regarded as being held by the team that most recently won the Test series. If the test series is drawn, the team that currently holds the Ashes retains the trophy. The term originated in a satirical obituary published in a British newspaper, The Sporting Times, immediately after Australia's 1882 victory at The Oval, its first Test win on English soil. The obituary stated that English cricket had died, and "th...

I was based in London for the 2009 series.
It was amazing how many people suddenly discovered a passion for Cricket during that series! I have never seen so many fervent supporters…
I caught up with a few of them only a month ago and for some reason they are not so interested this year!

Sir Ian Botham is a legend… he still makes the news. Every time he and Ian Chappell meet up they get into a fist fight
… every… single… time…

Ok, now it sounds as if it could actually be interesting. How many days does the fight last?

American baseball, each team bats nine times (more or sometimes one less) over the course of about three hours. Test Cricket a total of four battings over five days. Now, I can appreciate a properly paced, analog world, but it would seem as if only a bunch of non-working, Victorian aristocrats could appreciate that. Or if you lived in the part of the world where everything is trying to kill you 24/7/365, I imagine standing around a well manicured English lawn for 5 days not doing much could be considered idyllic.

Cricket was certainly the game of the aristocracy… to a degree it still is.

On the minus side Test Cricket was introduced to the Japanese as a way to encourage them to take time off of work (yup… that is written correctly)… and even THEY said it was too long, and not so interesting.
And they do Tea Ceremony…

There are 3 elite levels of cricket though.
(FYI an Over is 6 balls bowled by a bowler - who is like your pitchers… except he/she actually moves)

One Day Match - introduced in the 70s. Each side gets 50 overs and only bats once. Much higher paced game. Game lasts ~ 6-7 hours

20 - 20 Cricket - Introduced only a decade ago… each side gets 20 overs only… extremely fast paced game and currently the most watched form on the planet. Even my wife watches this. Game lasts ~ 3 hours

20 - 20 Cricket - Introduced only a decade ago… each side gets 20 overs only… extremely fast paced game and currently the most watched form on the planet. Even my wife watches this. Game lasts ~ 3 hours

This must have been the type of game I watched a year or two ago because there’s no way I would have sat there for 6-7 hours, especially since I never had a clue what was going on. Still entertaining, though.