I come here as a brand new user looking for help on my newly opened, non-functional machine because your Customer Support can’t provide anything other than a canned response and I get locked out of the forums for too many replies?

At this point, it’s hard to imagine why I would ever recommend - or even keep - this $5000 brick. 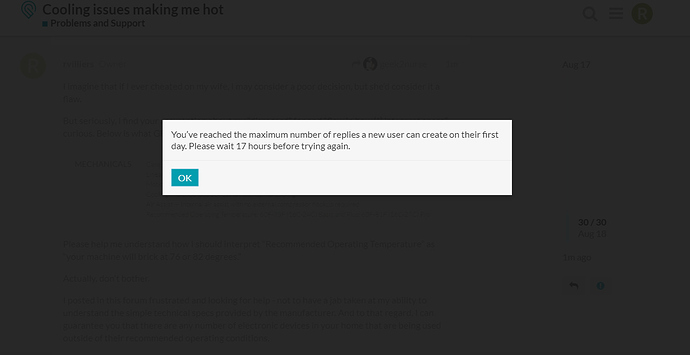 That is a Discourse automatic limitation. Discourse is the service Glowforge uses to operate the forum. I believe the limitation is there to discourage spammers.

Ah, yes. I got this the other day and have complained as well. It’s really an issue since the forum also houses support.

While it is a Discourse feature, it should be something GF can override by changing permissions level assignments, trust levels, etc. There are enough people who live in here… GF can give them a small stipend (free proofgrade!) to help with moderation. Spam isn’t nearly as much of a crisis as not being able to reply to support. You can’t even log in with owning a machine or being added to someone else’s machine.

Good point. I’ve been here so long I forget some of the limits that new people have.

I’ll look into this – I’m sorry for the frustration!

This also may help to keep new people from posting all new posts that could be answered by doing a simple search… Instead of searching for issues that more than likely have been answered a thousand times over…people tend to to make a new post. Idk…

Except that the issue is that you can’t reply, even to your own posts. And it’s happening to people who aren’t new.

FWIW, I think it also does have a little to do with the rapidity of the responses many of use have come to expect. I know that if I post something and there aren’t multiple answers inside an hour I get antsy.

The company I own has built and managed dozens of community forums for some major ecom and entertainment clients. I have never seen a single one limit the number of replies a user can make - let alone lock them out of their own posts. Typically there are triggers in place that will identify spam without locking-out users. The most aggressive I’ve seen is simply adding a captcha on post/reply, but usually you can rely on a healthy community to help weed-out spammers.

This is something different. Either GF is not minding the store (as much as one would hope) or they’re actively working to suppress negative and/or frustrated feedback on their product. Personally, my impression is that it might be the latter as I have also found there to be restrictions on product reviews and other forms of public feedback.

It’s not an evil plot; it’s a property of @Discourse. Algorithms are not 100% perfect, but they do help to limit trolling behaviors and such. (It’s not always just the bots that are problematic.)

Why is there a topic reply limit for new users?

First of all, this is a newly introduced configurable setting of newuser_max_replies_per_topic which can be changed to every forum owners’ taste but defaults to 3 for safety. While we have always had global post limits, this new per-topic limit is...

or they’re actively working to suppress negative and/or frustrated feedback on their product. Personally, my impression is that it might be the latter

You should submit a bid to build an appropriate forum for them, if you think Discourse is not a viable solution.

Right. Except that most companies are smart enough not to use it. It’s extremely poor CX - particularly if you’re relying heavily on your forums to provide product support.

I work with companies every day who, against better advice, actively try to suppress negative feedback about their product. I will not say that GF is actually doing this, but I can say that I’ve seen some of the hallmarks.

As for building them a better forum platform, I would happily do so. I’d just want to be upfront with everyone that the forums will not be available if the outdoor temperature exceeds 75F.

Glowforge isn’t one of them. If you have come to the conclusion that they are, you are mistaken.

I hope I am mistaken.

All I know is that GF has offered little in terms of actual customer support and I’m sitting on a brand new machine that won’t work. My inclination is to tinker with some of the solutions suggested, but I don’t want to do anything that could be deemed as voiding the warranty in the event the machine needs to be returned.

The problem is that the Glowforge support team can’t actually offer suggestions to people on how to cool their environments down. It’s beyond the scope of their job descriptions…as well as they don’t have enough people to deal with it.

There are some things you can try though that won’t void your warranty…as long as you aren’t breaking into the case and tinkering with the electronics, you should be okay.

I believe it’s worth your while to try a couple…the replacement costs on the tube a single time will be more expensive than buying a small window unit or a portable AC unit for instance, so it makes more financial sense to just get the one up front, and you extend the life of the tube. Which is what they are trying to do with the limits they set.

Don’t know, but it’s well worth the setup trials once you get them going.

The problem is that the Glowforge support team can’t actually offer suggestions to people on how to cool their environments down.

Funny how most lasers before the Chinese lasers became popular for home users or smaller shops, most needed to run within a certain temperature environment and it was a given that if you ran a laser you should keep it in a quality environment. Glowforge has tried to break the mold in using a glass laser and doing it cooled so you wouldn’t have to mess with the chillers and water reservoirs and all that headache. And that seems to be the thing that most people are upset about
…it’s like the old adage… Ya can’t please everyone. Because someone will always find something to complain about when they don’t want to use it within the recommended guidelines.

Glowforge has tried to break the mold in using a glass laser and doing it air cooled so you wouldn’t have to mess with the chillers and water reservoirs and all that headache.

i think the big picture issue is that GF (not unlike many other companies selling complicated equipment) undersells issues like environment temperature limits. they’ve gone to great lengths to show how “easy” it is, often to the detriment of new, inexperienced users. i mean, the intro video on their web site shows the GF sitting on a kitchen counter. would any of you actually put your GF in the kitchen? or cut a piece of chocolate for your child to eat (ok, maybe if that was your very first cut or you only cut food)?

now, i don’t blame them for trying to make it look easy. and on some levels it is easier than traditional laser cutting software. but some of the designs they show are not easy. even if you already have the plans. and definitely beyond an average person to create.

so we often get people here who were sucked in by the “easy button” and who are frustrated because it’s not. including the environmental temperature issue (and the venting issues). and, to be fair, a lot of that is on GF for not setting expectations. you have to dig into specs or through the forums to figure these things out.

Its marketed as a user friendly laser for indoors… I never once saw any of their advertising showing one of their machines in a garage or in an environment that did not look comfortably cool enough to live in.
If used in the way described in their marketing, and eventually with their filter, it will be easy to use comparatively to other lasers out there.
They shouldn’t have to put disclaimers like if you choose to use this in a garage or in a house that’s way too hot to be comfortable in it won’t work LOL