Found my way to the centre of the maze

Oh, and it looks great!

Ha! One of the first things I thought when I saw this in the show was, “I bet I can make that with my GlowForge!”

You might have a hard time making it in one piece, I have an 80W laser which I used to cut through the 12mm ply walls but you could cut 2x 6mm pieces to do it

The files are now online http://www.instructables.com/id/The-Maze/

Thank you for sharing. Looks amazing.

I was going to reply “it’s from a show…” but then I realized you were quoting the show.

I’m glad I’m not the only one that thought about that!

I engraved some river rock with the Maze as well. After engraving, I sanded the surface of the rock, hit it with some metal-wax, then sanded again for a nice, smooth finish. It turned out very well, if I do say so myself. 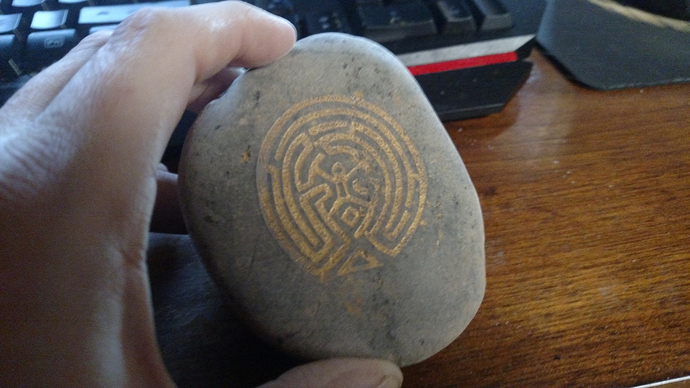 I might have missed the reference as to your engraving, but was it with a laser or you used a sand blasting mask (that was lasered)?

How you tried different rock materials or just a river bed rock?

Sorry, I should have included that part! I engraved the Maze design with a Trotec 300 at the Techshop in Pittsburgh (love them). I have worked with a number of different materials on their lasers, including multiple types of stone. If you asked my favorite, I’d say it was a tie between polished black marble and good old fashioned field stones (big flat stones, used for garden paths mainly)

The reference is a show on HBO called Westworld (remake of a movie from the 70s).

I need that toy and that rock! Both those things just rocketed up my list of things to make on the Glowforge.

The maze isn’t meant for you.