I’ve been working on testing how ‘large’ a piece I can make, stitching multiple sections together in multiple layers. Because I’m a glutton for punishment, on this first project I used only Mac preview to edit and GF Premium for some outlining. Yes, it was sheer torture, but encouraged me to learn Adobe Ai.

I did a cardboard mock-up first to test different layouts. The Elmers tri-fold display board (3’x4’) is terrific for doing this, and comes in 5 colors which makes visualizing the layers a lot easier. For reference, the bottom layer (Black - aka Layer 1) is one solid piece - I used four individual laser cut pieces as a template, traced onto a single piece, and cutout by hand to give me one solid sheet for the backing. To make things not so hair pulling, that layer and the other two (Layer 2 - yellow and Layer 3 - Red) are just one file each, which I mirrored and flipped to give me the other pieces of that layer. 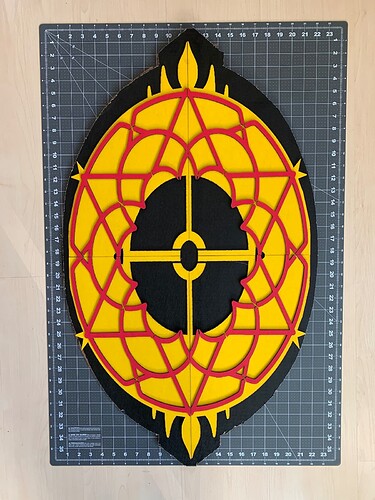 Now, onto the wood version. For reference, I used Sureply .20" underlayment which wants to ‘cup’ a certain way relative to the face grain direction. So to keep the piece relatively flat I used two Layer 1’s cut at 90 degrees to each other, then glued and clamped them for a full day before paint. 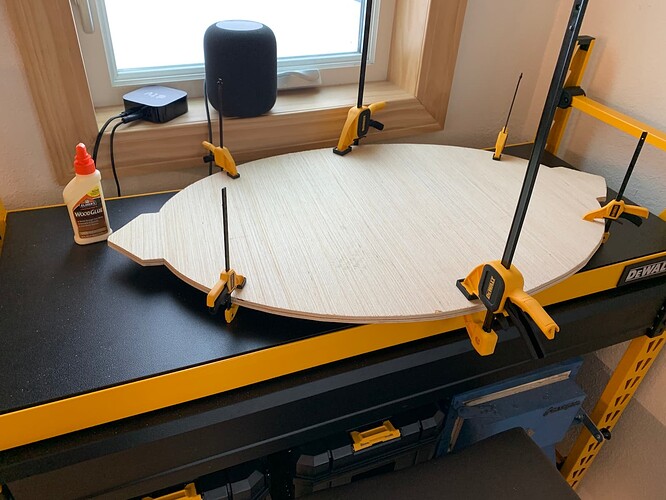 I really liked the raised lattice look of the cardboard mock-up, but when cutting from wood, it just didn’t give me the effect I was looking for, not to mention it was impossible to sand. I also did a mock up not using the lattice on Layer 3, just the infill pieces. I liked that a lot but it just wasn’t what I wanted for this piece. (Spoiler, I did do this on a separate project, called ‘The Turtle’, which I’ll write up at another time. 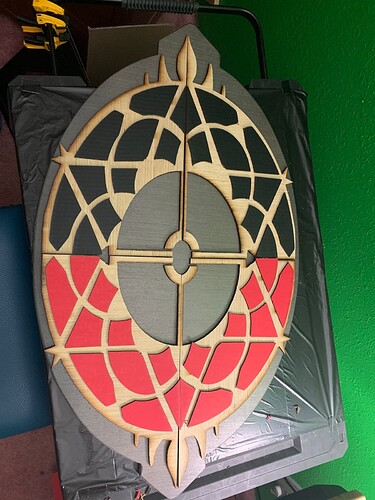 Ultimately, I decided to beat myself over the head a little and vary the color of the different components of Layers 2 and 3. Then, once all the layers were painted, I glued and pin nailed layer 2 to Layer(s) 1. (Pin nails are located under Layer 3 pieces so they don’t show.) Then, glued Layer 3 (Lattice Layer) on top, laid flat pieces of wood over all the layers, clamped it to the bench, and put hand weights on top for a day. 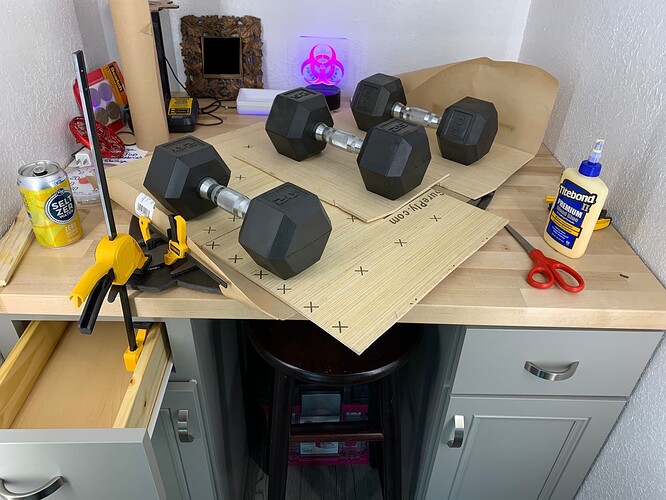 And here we go. All the paint is rattle can Rustoleum. As I said, I’m a glutton for punishment, and wanted to see how far I could stretch my abilities, and turns out tolerance for frustration - mainly on the software side. But I learned a huge amount, made something fun & cool, and I’m happy with the end result. 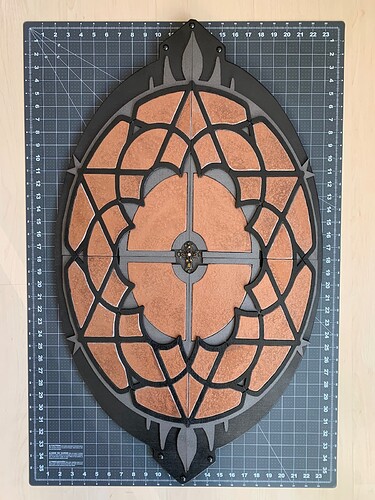 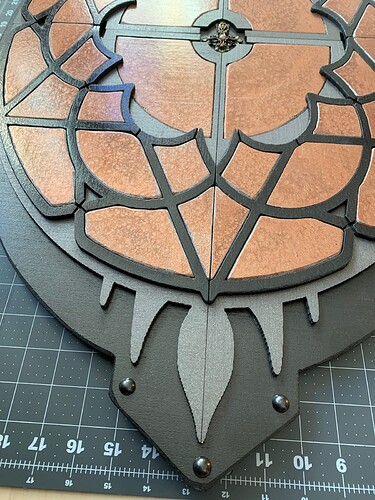 Currently, I’m working on a 6 (unique) section x 3 layer project called ‘The Maze’. I’ll have a write-up for that one at some point, if I don’t go insane figuring out the details and throw the whole thing in the trash before it’s done.

This is a terrific project and write up. Thanks for sharing.

if I don’t go insane figuring out the details and throw the whole thing in the trash before it’s done.

After working on a sculpture for years, one day Leonardo da Vinci walked into his studio and attacked it with a hammer. A man can only take so much.

A lot of work, but it looks fantastic! Now you just need a strap on the back so you can use it as a shield! I love it!

Thanks all. For my first test project using multiple sections, multiple layers, and ‘hammered’ paint, I’m quite pleased. The biggest takeaway and lesson learned - Start with a nice & clean SVG file if possible. Doing something this large with a PNG and outlining was doable, but a huge amount of extra work, at every stage. Next project I’ll outline, ‘The Turtle’. A variation on this project which was a test of how many separate pieces I could handle (well over 100), as well as a painting and sanding endurance challenge. Stay tuned.