Have you ever seen a Glowforge founders ruler cut before? I came across some old footage I never released because I had a poor camera and the footage was shaky. I decided to just speed it up and release the footage anyways so it wasn’t as shaky and take less than 40 seconds to watch now lol. I figured someone else who started out as a founder would get a kick out of it and didn’t want to not release it out to the world. Anyways here’s the clip if you want to see it:

Oh yes, I remember that first operation on the pre-release the company sent me back in 2017. My first experience with CNC and a laser, it was exactly the feeling of Christmas morning as a child! I hadn’t experienced that for at least 5 decades.
The precision and detail possible had been a fantasy for decades since I first saw art created with a laser beam. I will always be grateful for glowforge putting that capability within my reach.
Thanks for the flashback!

As at least one of the last folk to receive access to that I made several of them and still use them.

I’ve never seen that before. I didn’t even know home lasers existed until 2019. Very cool.

Mine is part of the collection on the frequently used rulers shelf. 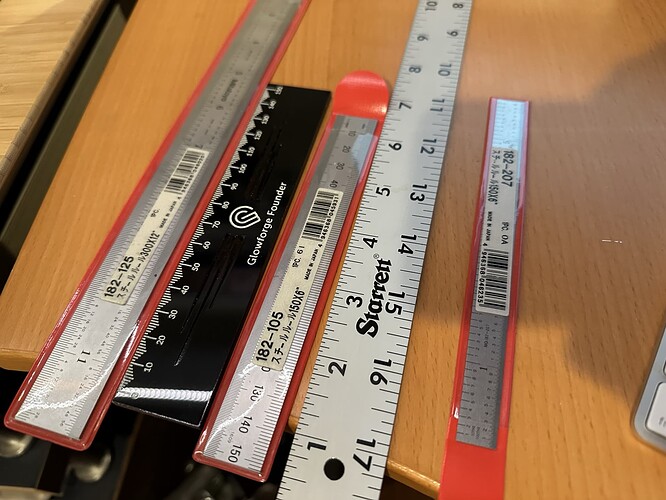 You’re welcome. I was hoping someone enjoyed it even though it wasn’t the best footage out there lol

even though it wasn’t the best footage out there lol

It was only half the footage I wanted but It inspired me to do more, even having to figure the angles to get out the last inch

Glad to see I wasn’t the only nerd to pull out the tape measure first thing to check the accuracy of the cut!