Just for laughs. (Especially ex military will love this)
My son is in Signal Corps as satellite coms and told me the other day about one of his last maneuvers. He had a newbie standing out in a wide open area with the large antenna. Every once in a while he would point a multimeter at him and have him correct the “aim” and go back to what he was doing. When I asked him how long he kept him out there, he replied " three hours". We both laughed till we cried.

It is refreshing to see how as much as things have changed, some things remain the same.

Im college I spent some time in theatrical production. We would send some of the new kids to the tool room to get couple of “cordless extension cords” off the tool wall. Or to the paint room to get some plaid paint.

I worked in a manufacturing facility and it was always a good laugh to send new guys to the industrial supply house to ask for Fallopian tubing. Of course we had already called ahead with the REAL purchase order and let the vendor in on the joke.

Don’t they send incoming med school students to get a neck tourniquet?

I once knew a young submarine sailor

that would take advantage of senior sailors penchant for these types of pranks. “where have you been all day?” "I’ve been on the tender looking for that relative bearing grease you wanted ".

Occasionally a new engineer would be told that our large anechoic chamber needed to be “degaussed” so as to properly restore electromagnetic compatibility. He/she would be dressed up in one of those full body metallic firefighters outfits. Sent into the massive chamber pictured below and told to carefully touch, one by one, each of the thousands of cones on the floor and walls with a long electrically grounded pole. Or at least as many as could be reached, as those on the ceiling were 60ft up. The engineer would use a tall ladder stand to get at some higher on the walls. Of course this was the equivalent of an engineering snipe hunt. Yeah, we eventually got into a little trouble for doing that. 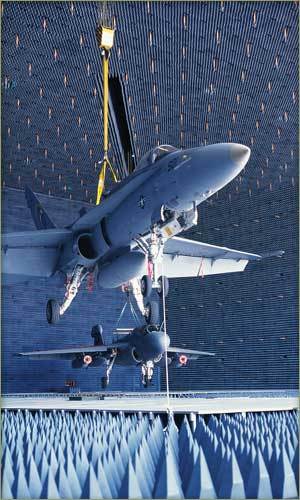 A friend of mine works at the local Catapillar plant. They usually send the new guys to parts to ask for a flux capacitor.

Sounds as bad as sending the new engineers to the tool crib for a “long stand” after a quick phone call. The crib attendant would generally let them in on the joke after about 15 minutes.

My parents built a timber frame house. The running joke with the framing crew was to send the newbies to the hardware store for the “beam wrench”. The best part was that there really was a beam wrench - it was made out of plywood and gave the installers enough leverage to straighten a twisted beam during installation.

In my first job as an engineer, one of the supervisors sent an intern to the store for yellow and black safety paint.

Where I used to work, the novice was usually sent to the warehouse (usually when he was working as far away as we could) for a level tool with a fixed bubble.

If the store manager was in the mood, He used to tell them that someone else had it, so they had to come back later.

These stories are bringing back some unfond memories of my training days. Chuckle!

Amazing how creative people can get.

Best one I have heard is an apprentice foundry worker, his first project is to ram a mold for a frying pan. at lunch someone would take the core out and re assemble the mold, they would pour it after lunch and the first thing would be it would take way too much metal, then the apprentice would have a 2" thick pieces of cast iron with with a handle and have no idea what went wrong:joy:

On an oil rig? I can only imagine! I bet it is second only to submarines.

Since things are kind of slow this morning…

The fellas had to be kind of careful with me when I was getting started.
(First gal to encroach on their world…they initially treated me like I was radioactive.)

They limited themselves to sending me after left handed pipe wrenches at first. (No, I didn’t fall for it.)

Then when that palled, they used to like to dangle me over sharks (you get rather large ones in 300+ feet of water) circling in the water below, as I was transferred from the platform to the tender, while balancing on a big cargo transfer ring, holding a cargo net, hanging from a crane 150 feet up. That was fun. (And there ain’t a hell of a lot you can do about it while hanging over a shark either, except develop some really exceptional gripping strength, and very good balance.)

They also thought it was a hoot to keep the rope or ring about 4 to 5 feet off the tender deck, even in low swell, because then someone had to boost me up to catch it, and there were plenty of volunteers for that part…

And i always got to ride shotgun in the helicopters…they have glass bottoms in the front. (Don’t know why every single one of the pilots thought it was funny to see if they could make me throw up…seems like that would be a royal pain to have to clean up if I’d lost it.)

All just part of being the new kid on the platform…at least they didn’t dare pipe dope a body part with me. (The guys weren’t always so lucky. Chuckle!)

In the Boy Scouts, we always sent Tenderfoots out in search of a “smoke shifter.”

My boatswain’s mates also liked to dunk guys being transferred between ships via high-line transfer, with extra points for a full 360 loop. I had to have a long, long “don’t even think it” briefing with them before we transferred the Secretary of Defense that way!

Ever entertaining but you really haven’t seen the full monty of a mail buoy watch until you see a poor NUB in full foul weather gear dead in the middle of a boomer patrol! I laughed until I cried, and then laughed some more. So very wrong to convince some nieve kid that they are going to get a care package at such a time, but oh so funny.

It’s not only work that pranks the noobies. In my family it was the girlfriends who got it. Eventual daughter-in-law #4 got asked by my dad, “Jane, could you please pass the coleslaw.” No one paid attention and just kept going on eating. Eventually Jane gave up looking and said, “It must have been taken off the table!” We all roared. It happened to all of them! There never was coleslaw on the table.