Funny thing happened on the way from the clearance aisle

I picked up a piece of slate a couple of weeks ago, in the clearance aisle at one of the local craft stores, thinking it would be something I could use to try out various settings and techniques.

Fast forward; today I decided to try out a couple of things and make a hanging plaque for work. I set the

to start on the raster image before moving to some text engraving.

First observation was my engraving area was not a pronounced as examples shown by other forgers.
Then I notice what appeared to be a water mark start to appear. It was nearly white and said, “that memory”.

I stopped the print job, and took the piece out to the garage to sand it down and try again. As I started sanding, a whole image began to appear. Hidden behind the gray paint, there was a complete quote with a flower. “When someone you love becomes a memory, that memory becomes a treasure.” Upon closer examination, it also appeared that the piece has been broken and glued back together.

The quality of the lettering makes me think that it was perhaps pad printed, maybe it didn’t pass quality control, but was then masked over and packaged for retail as a blank canvas. If I hadn’t decided to laser mark it, I would have never known there was a hidden message.

This was after a lot of sanding. 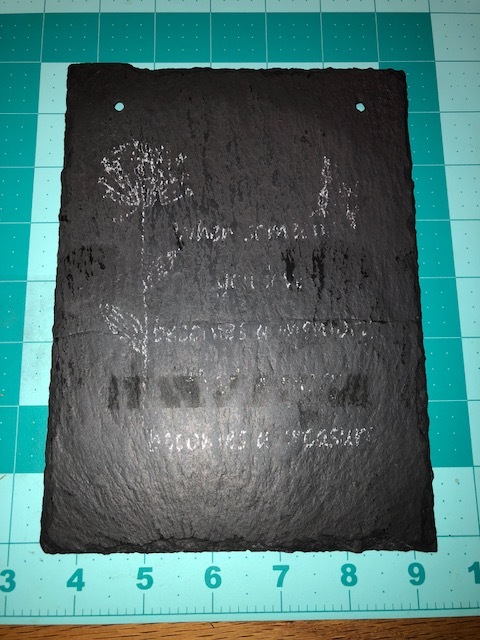 I reran the job on the back and it came out matching other examples I’ve seen on the forum. 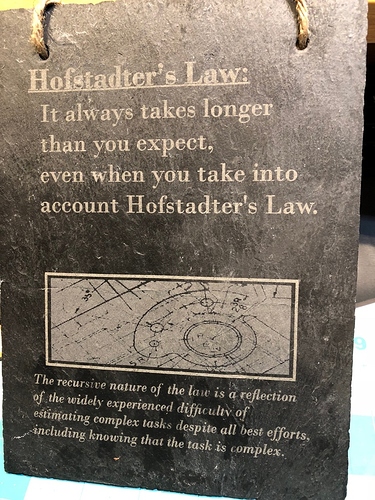 Haha, loved the story! Like finding a hidden Rembrandt under an amateur painting.

Seems appropriate, since this is a good example of Hofstadter’s law