When I got a Glowforge, the very first project that came to mind was how can I enhance some of my gaming experience (yep, I am that nerdy). And the first project I wanted to try was an old game I had that had a paper board and a thin cardboard tower. I always thought it could have been made better and after I completed a few of the other inspired works I posted earlier; here was my attempt. 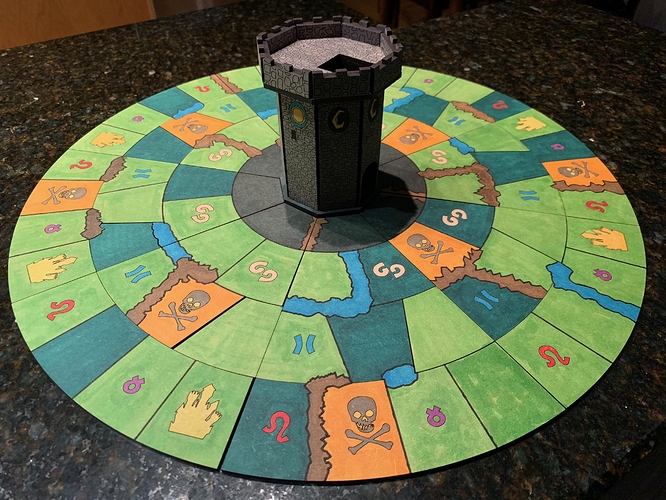 The board comes apart in pieces like a pie and the tower can actually be taken apart and stored in a box that is 1.25" tall (original box). It is made out of 1/8" draft board and is colored with markers. It has a great feel in the hands and so much more durable than paper. 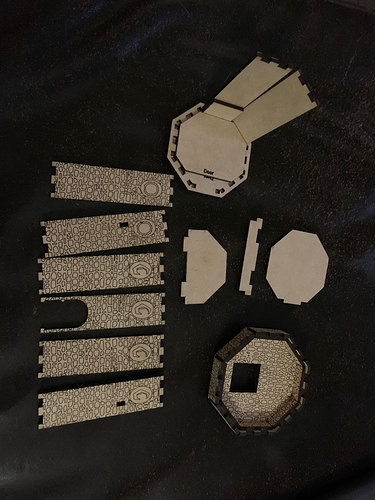 The design for the tower took several iterations. Below are just a few examples. The first one figured out how to make the tower and make it so it could be assembled. Then I decided to make it a dice tower. Then I added the stone etching. It didn’t stop there because I wanted to make the dice fall through more cleanly making sure they couldn’t get stuck and then finally setup the pieces to have numbers on them to make it clear for assembly. 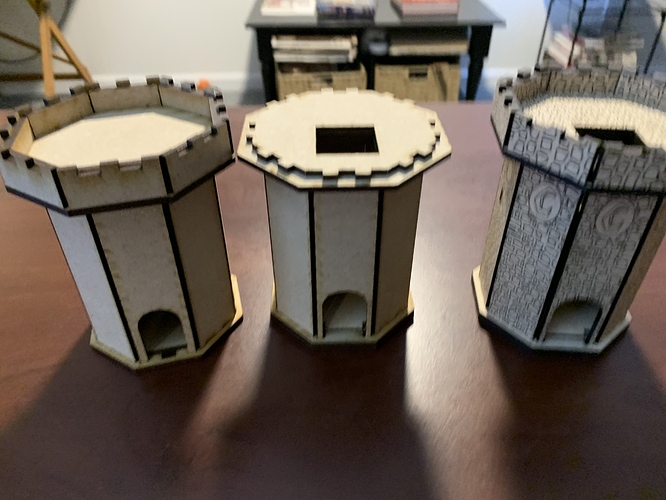 As someone with Aphantasia I have to keep printing them out to really see if they come out right. Wastes to much material, but no other option. (imagine having to throw out 4 or 5 of these).

I was super proud of the fact that the board and this tower that can be assembled when needed fit into the original box.

I also cut out some really nice double sided coins, some engraved plastic xp counters and wood versions of the event tokens. 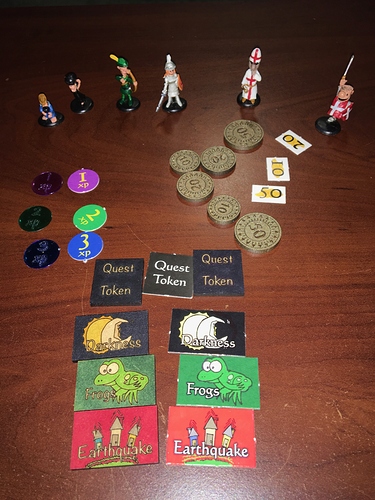 Overall the board and the tower were amazing, but the coins also really surprised me. They are double sided and a bit of metallic gold paint really made them pop.

In the end, pretty happy, but I would love to hear your feedback on how you think I could have made it even better.

I’m afraid to even think about making suggestions.

This is 10 kinds of awesome. I really love the tower.

Thank you. I was really happy with how it came out.

This is an impressive project. I especially like the stone etching on the tower, the fact that the tower is also a functioning dice tower and the double sided coins. This will certainly enhance the play experience of the game. Well done.

I love it! The board design is unique and I really like the nonstandard circular shape and the incorporated dice tower. You could sell these!

Absolutely super job. Love the stone engrave and the gold treatment on the coins. It really makes a step up in the wow factor.

Outstanding! The dice tower IN the tower is a great addition! Well done.

That is really great!!!

Got to ask.
Are FROGS a good thing or a Tribbles thing?

Game making was why I bought mine. Life hasn’t quite turned out that way, but I’ve made a few little bits out of it for playing, but mostly ended up making organisers and scenario so far!!

This is too fun! To me, making something you enjoy even better, is one of the best reasons to have a Glowforge. Your work is spectacular!

I love the idea of making board games

its in the basket of ideas for things down the road

@cynd11 Thank you so much. I don’t know that I could sell it because it is not my board game. it would be like trying to sell the catan board or a printed board from another game. I created for myself to really enjoy it. I was even worried about posting it, but figured since it was for me it was okay. I am not sure what it takes to be allowed to sell game upgrades. I see some online, but haven’t looked into the licensing.

Anyway, thanks for your encouragement. This has been such a fun start to my journey and the feedback on my few posts yesterday has truly been appreciated.

Whooops! I’m not a gamer so I did not recognize it as an existing game. Anyway, your reboot is outstanding!

@brokendrum, yep Frogs are like Tribbles. The whole game is a parody of an old electronic game called Dark Tower. This one is also based on some comic book characters. This is a link about the game: [https://boardgamegeek.com/boardgame/8508/dork-tower]

I saw it and was like…that’s got to be a dark tower game! I’m not that old, but my mom is. She’s was the board gamer in the house. Loves playing that game. And the pre-amble game of fine a set of working batteries for it. 2 D batteries if I recall…maybe C but still.

This turned out great! Love the tower in the middle.

the iterations were definitely worth it.

@wesleyjames, I am old enough but couldn’t afford to buy the original game. By the time I could, they price was crazy as a collectable, so I found this non-battery version ;). Thanks for sharing the memory!