I was trying to find an idea for a thank you gift for a friend, and as he is a great retro gaming fan, this popped into mind. In the end there should be 6 different games, so re-creating the labels and making them

friendly is taking a while. I’m still fine tuning the files and the settings to get the contrasts/depths right, and I’m going to have a go at varnishing/finishing techniques to try and get it right, but I’m really delighted with how it’s turning out. I have a feeling that what started off as a one-time gift might end up being quite popular in my future etsy shop! 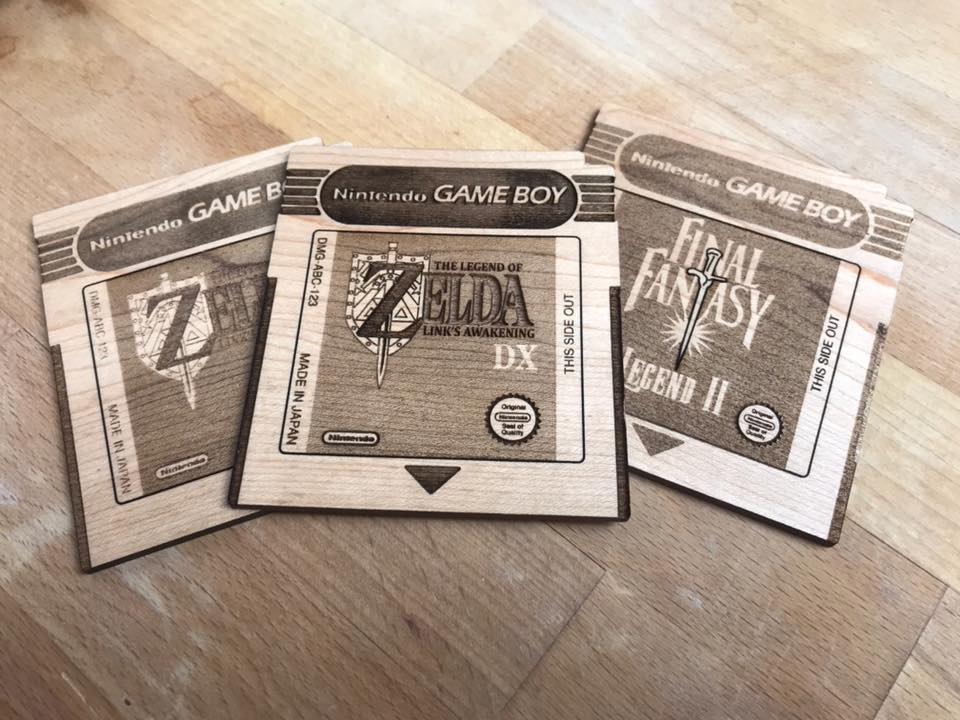 Looks like you hit the mark with the center one!

Fun coasters for sure!

Those are going to go over really well.

absolutely love those!! My family is a family of nerds…all my kids are gamers…lol.

I am sure they will sell

might end up being quite popular in my future etsy shop

I think what she means is, Etsy won’t let you sell them on their site, but you could sell them on your own site.

but you could sell them on your own site.

I don’t think that’s what she means. The logos are someone else’s copyrighted and owned property. It’s illegal to use them & sell them. Etsy will prevent you from doing that if they notice the listings. You might get away with selling them on your own website but it’s still not legal. On your own website you don’t get moderated so unless someone sees them and complains you’re able to sell, just not allowed to sell.

Making them to use yourself or give to someone else fits in the Fair Use exemption to the copyright laws although if it were a direct duplication of something that already exists Fair Use might not apply.

I was just saying she might mean that, because if you look at her site, (listed in her profile), she sells Pokemon stuff, and other copyrighted characters.

Our handmade laser gifts and vinyl decals are manufactured in house at our facility in Oklahoma City.We have many items to choose from including personalized travel mugs, cake toppers, handmade laser cut acrylic jewerly, ornaments, keepsake items,...

*I’m totally not saying I haven’t, because whose friends don’t all hit you up for something from their favorite show, movie, game, etc.

I was just saying she might mean that, because if you look at her site, (listed in her profile), she sells Pokemon stuff, and other copyrighted characters.

) so it’s likely she’s either drawing it herself or has a licensing arrangement. Doing something for friends that’s a gift fits into the Fair Use exemption.

Awesome, I totally will.
And to be clear, I had no ill intent, and certainly not trying to be snarky in the least. I’m always the one telling my friends, and kids, not to be so quick to assume anything, or act abruptly. So, no disrespect meant at all.

She’s one of our little bit of famous here (like you). She had people lining up to be her assistants at her next SI Swimsuit shoot

She’s been in the laser cutting business for a lot longer than most anyone I know. In fact I believe she’s got a laser tube that holds the record for a UL tube life - something like 14 or 16,000 hours!

NICE! I’ve been putting some hours on our laser, but nowhere near that much, although it sure feels like it on days that I’m sitting here four hours figuring stuff out!

And where do I get in line for that Swimsuit assistant gig?

Hey Steph, you’ve got another volunteer!

Yep, sorry, should have specified, I am making these look close to the real thing for my buddy’s gift, but the ones I imagine actually selling would be more parody style, not using the actual logos and labels but puntastically amusing versions of them.

Licensing agreements are pricey but necessary. I’ve haven’t checked on Nintendo game boy stuff, but I have Pokemon Go and a few others licensing. And even with those, I’m limited to a specific number per quarter.

Parody ones should be fine. Copyright infringement is something you DO NOT want to deal with…lol
I’m contracted to do Star Wars stuff for Disney and they are constantly checking that I’m not selling them…lol