I’ve attached a simple Inkscape design .svg file.
There are two fan shaped outline paths, and four circular paths.
In my gui, each set of paths is correctly shown, but in the workplace, only the upper two circles are recognized, and the fan paths are ignored.
I’m trying to cut two separate draftboard sheets, one with the inner fan shape plus four holes, and the other with the outer fan shape plus the same four holes.
If I run the mouse down the left hand of the screen, only the two holes are high-lighted.
I’ve tried everything, from re-starting my router, re-booting the desktop, changing the colors of the components in inkscape, moving the position of the design, but nothing changes.
Could anyone first load my file and see if there is anything odd about it,or do you see the same behavior.
MTIA,
John

Just move it up a slight amount until the lines light up. It is over the grayed out area at the bottom.

Loads for me ok. As already stated, move the design up. 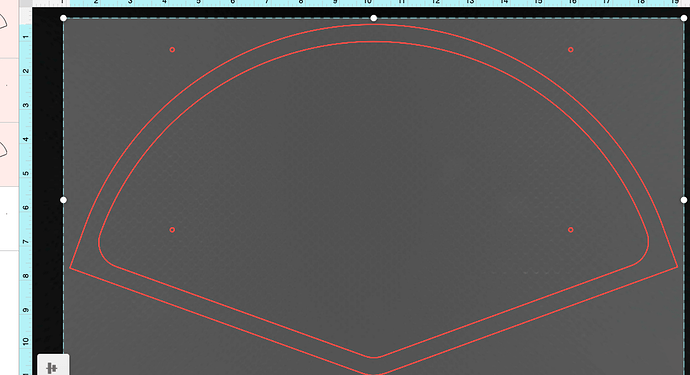 Perhaps I should change my handle to ‘red-faced’. Basic oversight.
Curiously, it doesnt explain why the lower circles were also greyed out, and not recognized!
But now they are.
I think a large drink is called for, and thanks.
John
EDIT All is now cut correctly.

A drink sounds good to me, too!

Good to know it was an easy fix.
Never be afraid to ask when you hit a wall.
Cheers

Curiously, it doesnt explain why the lower circles were also greyed out

The lower two circles appear to be grouped with the outline whereas the other two are not.