I am just documenting user experience here for what it’s worth. I haven’t seen a post about this before that I recall and there were no topics that jumped out from a search for something like this situation that I could see from multiple attempts with different terms. That isn’t saying much because topic headings can be pretty scant on information.

Now that the Set Focus lives behind that obscure gear icon with no tool tip on hover with other obscure settings, evidently I accidentally indicated that I had a compact filter attached.

I didn’t know what was going on when my print started and there was not the familiar whine of the exhaust. That allowed me to hear other sounds more clearly that I wasn’t accustomed to and I thought that my fan wasn’t blowing. It was only an eight second small cutout of veneer so I thought maybe that was the issue, it didn’t have enough time to spin up. Didn’t quite notice the smoke then.

I did another print of 47 seconds and no exhaust. I noted that there was lots of smoke but the air assist was doing great. The smoke did clear after a bit of the print but I wanted to check if something was messing with the fan.

Well, a pencil in the port clicked since it was still spinning down from low speed. Very hard to see if it is moving or not. So at least it was running.

So then back to the GFUI to see what was up. I was going to try another print and using Set Focus and that is when I noted that it the slider had gone to the right. 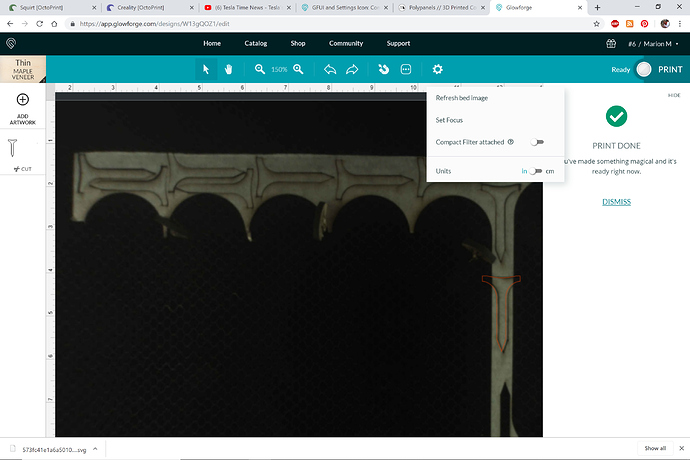 Mind you, there is no On/Off or evident indication that it the machine is set to compensate for a Compact Filter attached, just that sliver of Glowforge teal that must mean, yes, the Compact Filter is attached and your Glowforge internal exhaust is going to behave rather different than it has for the past two and a half years.

So I clicked back to what I guess must mean “Not attached so your exhaust fan is going to behave like normal” and then had to run a print to check if that solved the problem.

I was already composing my topic for Problems and Support and figuring out what would happen now that my machine is out of warranty and the fan is not working.

Well, #6 spun right up as normal and sucked those thin maple veneer fumes right out into the night.

Do what you want with this experience, but at least it is one data point on how the new setup caused concern.

Why this issue has some gravitas with me is because this is the second time today a user interface guided me into behavior that I didn’t want to do.

They recently installed new card readers on the gas pumps at the Breaktime down the street where I fill up. The GUI asks you four questions which the answer is usually No. Then it slips a carwash question in and the same button that you just clicked No four times now means that you are paying for a $10 car wash being added to the bill. After that screen, then it goes back to two more questions where No is the answer for that same button. Second time I had to go in and tell them to take it off my bill. The interface is slow enough that if you don’t wait for the screen to fully load, you may just automatically press $10 Diamond Car Wash.

you don’t wait for the screen to fully load, you may just automatically press $10 Diamond Car Wash.

Then it slips a carwash question in and the same button that you just clicked No four times now means that you are paying for a $10 car wash being added to the bill.

If it were not for scam and fraud we might not have an economy at all. The more you are aware of these games the more depressing it gets.

I am wondering just why anyone would not want the extra exhaust even with any filter adding to the volume. I bought a Vivosun that was insufficient when my main exhaust died. none of those will get less covered with gunk if the main exhaust fan was off. To the contrary, by constantly moving the fan minor buildup get brushed away particularly if more is not arriving at that time. For myself, with both Vivosun and main exhaust running I get less smoke smell than ever.

the more depressing it gets

I feel like a nudist in a mosquito colony most of the time.

Wow, can see how easily that slider could be moved.

The car wash? Yikes … That is past wrong!

Ok. I was looking at another topic that was discussing how Glowforge notifies folks of changes and updates. I didn’t click through on the notification of the fan settings function for the Compact filter. Since I don’t have a compact filter, I didn’t think it would concern me. But now I see that it does explain what is going on.

So shame on me for not reading everything. But still, the switch indicator could be a bit more obvious.

Thanks a lot for taking the time to let us know about this experience - I’m sorry for the scare! It’s useful to hear feedback like this as we make improvements and changes. I’ve let the team know what happened.