GFUI needs a "don't save" option

So yesterday I had run a test print from my little laptop in my workshop. I’d left the job open in the GFUI when I shut down the GF. This afternoon, I figured to use my workstation in my office to set up the full job based on the test I’d run yesterday. I went to Dashboard and opened that print and did my edits and then exited the GFUI. When I went to the workshop, the original job was still open, so I closed it. Since it was the same job I’d just edited in my office, it blew away those edits and I had my original test print again.

If there was an option to close the job without saving it, that would have saved me from my own stupidity…

I’ve done similar things. It’s not a good idea to have the GFUI open at the same time on two different computers… “Exit without saving” would only help if you KNEW that was the case, and if know, you can avoid it.

That being said, still a good suggestion.

I wonder if you could have made a copy of the open job once you were in the office, and worked on the copy. Would that work?

Generally adding complexity to a confusing or ambiguous system doesn’t improve its usability.

It’s just more things to remember, more edge cases to track in a UI that is already trying to be too much to too many people. Want to embrace really robust menus with granular options for saving? Well the ui would need to be seriously reworked if were to accommodate as many platforms as it currently supports.

It’s probably possible to do it, but for an idea of how tricky this can be, just look how long it took them to figure out how to shoehorn copy and paste into touch interfaces — and it’s hard to say whether your request is more or less complex than that without knowing a lot about how their system currently works. (My guess is much more complex)

I’ve never used the snapshot features where you can go to past prints, is it possible that you can use that as a revert? I’d guess that you would have had to run the job at least once, and someone more familiar with it would have to say whether it’s just reverting the settings or the actual layout. Anyone got any insight?

I’ve used the “past prints” command to recover from similar cases. Caveat: it only works if you have a perviously completed print. 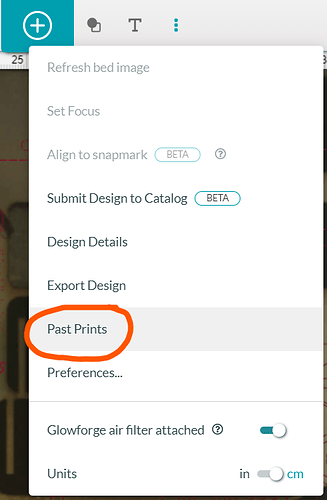 Not the same as what you suggest, but perhaps a workaround in the meantime.

I use a tablet to casually browse (previously logged in under a 2nd account to test non-regular stuff when that mattered) but only ever this account for the UI. Very occasionally, for very specific reasons, I’ve started a print from it as well.

I have found that if you accidentally leave the UI open on a “second device”, it won’t overwrite changes if you ONLY click the ‘dashboard’ link. If you click anywhere in the workspace itself, it will save the design as it appears in that browser. It will also save that way if you just close the tab/browser. Only clicking on the ‘dashboard’ link prevents it - so that’s kind of a “don’t save” option.

It’s not exactly what you’re asking but I don’t know if it’s possible, because the changes aren’t only saved when you close the tab or go back to the dashboard - it’s updated pretty much in real time as you make changes.

I’ve tested that by having the dashboard open in two browsers, opening a design on one, making changes but not closing, then opening in the other - changes are reflected.

… then, on occasion, they aren’t! I’ve also had it where I could make changes in one, and the other, close both, open back up, and each reflected what I had done in the individual browsers.

I’d expect this is an edge case not really expected from a typical user.

I think that’s pretty close. Thanks for the tip!