My brother wanted to have a gift made for someone. He was looking at Etsy, then remembered that I had a Laser.

He sent over the file and let me know what he was looking for. I decided to try doing a walnut inlay into a Birch round I got from Michael’s. https://www.michaels.com/10308887.html

First test I did was an array of engravings on a Birch coaster I got as a test sample. I adjusted the speed and power until I got the depth I wanted for the inlay.

Then I changed the DPI for the test inlay. I didn’t think that would be an issue, but it made the engrave depth increase (which makes sense when I think about it). Instead of doing a nice orderly array again, I just did a few tests to narrow in my settings and get the correct depth again. Once I got that down, I engraved a square and then cut out a piece of Proofgrade

walnut to match. After reviewing @marmak3261’s inlay work, I decided on a line width setting, and it fit perfectly first shot out! I then did a quick wipe with some mineral oil, and it looked great! 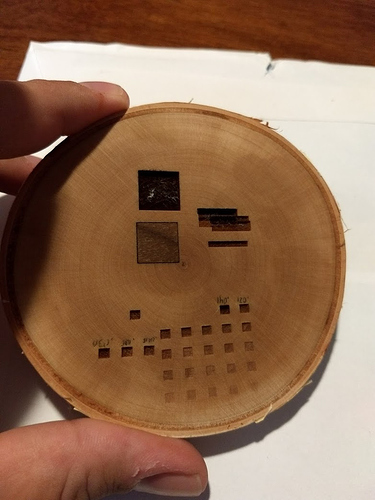 Next, I flipped my test piece around and tried a scaled version of the final part. It turned out great! One interesting thing to note, I was a little heavy handed with the mineral oil on the back side, and you can see where it seeped through some of the deeper engraves to the front. 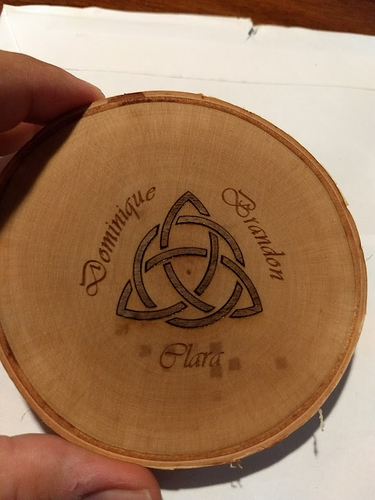 The final part looked great! I used the camera to align the design to go through the knots in the wood, that way they wouldn’t distract from the design. The only thing I would potentially change would be the names, they would have looked nice slightly darker. 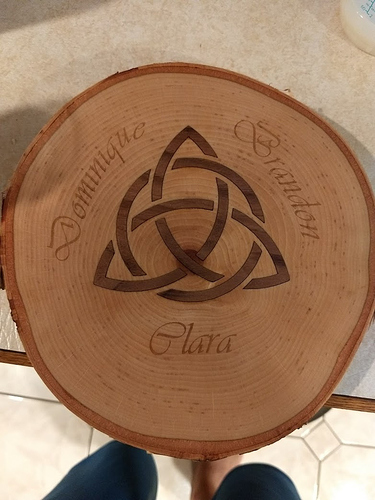 Of course the project is cool. Most folks here have more artistic talent than me.

But I was very surprised at how the mineral oil wicked all the way through the Birch. Would not have expected that.

It depends in large part upon grain orientation and how dry the piece is to begin with. Because @joe applied the mineral oil to the end-grain, and because the piece is probably kiln-dried, the strawlike conductive tissues (xylem and phloem) happily do the thing they’re meant to do.

an oil which polymerizes (mineral oil doesn’t) may attenuate this behavior somewhat.