I created line art (all black) in Illustrator and saved as an SVG.
When I uploaded to Glowforge, the app broke up my design into 5 jobs. Since I didn’t assign colors to the line art, I assumed glowforge would just run the entire job at one time.

For the first job I was presented with extended options that allowed me to run the machine at Speed 2050, which is what I wanted. For the remaining 4 jobs, I was only presented with a Speed option that maxed out at 1000. Anyone know why? 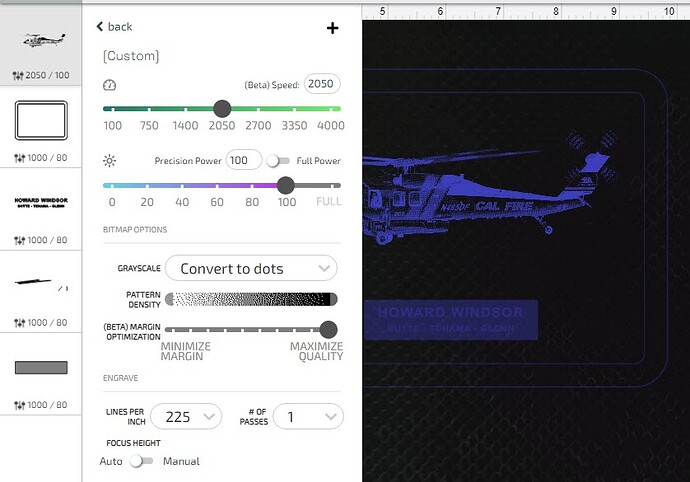 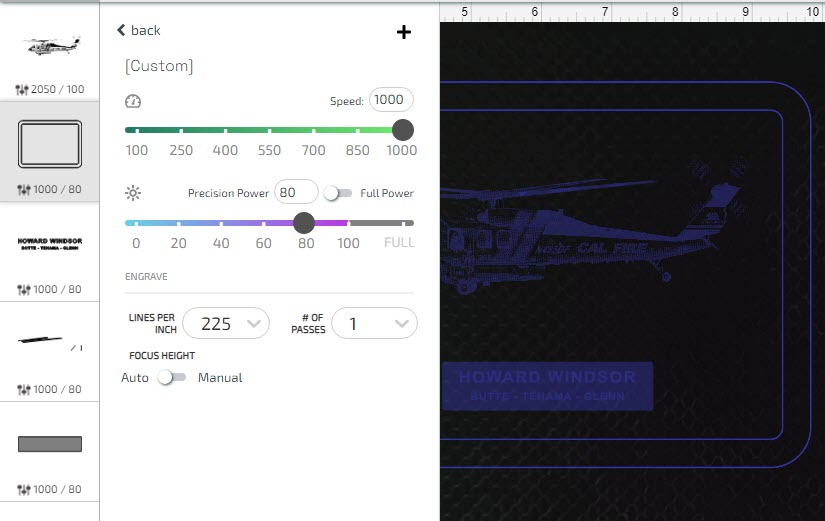 Five different shades of black? You could select all the same color and see if it matches for stroke, and then for fill?
White fill could be a problem also

The first image is raster/bitmap.

The second is vector.

As to the rest, would have to see the file but I suspect you have more mixed vector and raster elements.

Good points. I’ll be sure to check.

Ah. Yes, you’re correct. The 1st image is raster and the 4th image is raster and a part of the 1st image and I’m not sure why the app broke it out. Everything else is vector. With that thought, I should export my raster/vector design from Illustrator as a hi-rez png or jpg, and then convert that to an SVG before uploading to the glowforge app.

You don’t need SVG. If it’s all engrave then jpg will be fine.
If you need both cut/score and engrave you can copy/paste from Illustrator to the GF window.

The GFUI will separate out each raster as a separate layer. If a vector is tied to a raster then it will separate that also as depending on location and speed it might not print the raster and thus not the vector tied to it.

Thank you for the tip! For some reason, I got it in my head I could upload only svg or pdf. I’m not sure why I thought that.

Thank you! That’s good to know. I think I also learned that some things are better treated as a cut than an engrave. Image 2 is a double border I’m using to simulate a carve I’ll actually be doing on a cnc before engraving the design with the laser. I told glowforge it was an engrave and the back and forth of the head burning the vertical lines was painfully slow. I’ll tell glowforge it’s a cut next time and use a low setting so it follows the line and save myself 30 minutes.

the back and forth of the head burning the vertical lines was painfully slow.

Considering the distance traveled the engraving is not really that slow. Being too interested in speeding up an engrave will look back accusingly at you a lot longer than the longest engrave would take

If you just want a light cut (a score) and have it show up well you can manually set the focus to 0.5 inch and it will be a wider but shallower line.

You don’t need SVG. If it’s all engrave then jpg will be fine.

Actually I would choose png over jpg. Jpegs can introduce artifacts in your engraving that you can avoid with the lossless png.

I want to thank everyone for their comments in helping a new user figure out how the software processes different file types and even breaks out some jobs in SVGs. I now understand how I should set up my files, the file type I should use for the processes I need to run, and whether to select engrave or cut in designs that don’t require a full cut through.

The original Illustrator file included 1 raster image (Image 1) and 4 vector elements that I did not assign a color to. My intention was to engrave the entire job. Total engrave time was 59 minutes, which was much too long.

Based on your comments, I improved the file to include the 1 raster image (image 1) to be engraved, combined and colored 2 vector elements (image 3 and 4) and designated as superficial cuts, and designated the text (image 2) as engrave. Total time for all engraves and cuts was 9 minutes 14 seconds.

The time reduction of 50 minutes was due to treating the vector line work as cuts rather than engraves. 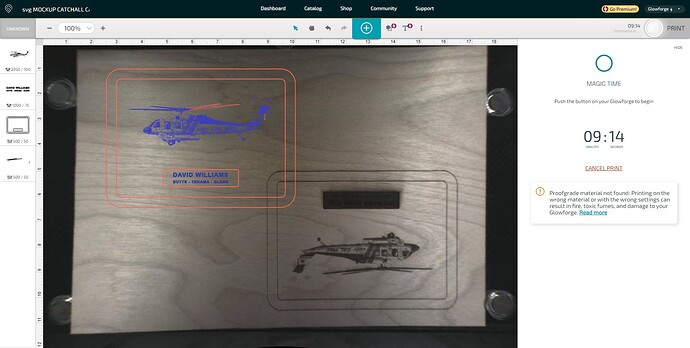 Since you’re using Illustrator, here’s a trick for rasterizing in the SVG without losing your ability to continue to make edits.