I am genuinely about to lose my crap with Glowforge. I had my first Glowforge for two days when it stopped working with an open safety interlock message. Now the brand new one they just sent me to replace the original one acts like it is printing, but the laser doesn’t come on. I don’t know what to do. please anyone… any advice?

Duplicate lines will cancel each other out and cause the laser to move around them but not cut. I’d suggest cutting a known good file like the Gift of Good Measure just to rule out the file as the issue – if it IS the file, we can probably help you figure out how to fix it.

I’m etching an image I’ve already done. I know it works with no duplicate lines. the laser just doesn’t come on. I’ve checked the pins inside the ribbon on the head, everything is perfect.

Please try printing the Gift of Good Measure on draftboard with Proofgrade draftboard settings. It takes many of the variables that could be causing problems out of the equation.

It prints that fine

Well that is a very good thing. It means the laser is working fine. Time to take a close look at the file that is failing.

It is any file that is not already pre loaded into Glowforge. like the other day I made coasters and just pulled images of the cowboy helmet off of online and now that image doesn’t work at all.

Maybe you could post a screenshot of the interface and your settings. If some files print and some don’t, it is the file, not the laser. Duplicate files on top of one another (think a copy paste situation where one duplicate remains on top of the original) results in the laser moving over the area but not firing. Sometimes files get corrupted.

It’s ok thanks for trying I’ll just wait for support to reach out. It isn’t a corrupt file. It won’t even let me etch a picture onto any proof grade material.

When you say the laser doesn’t come on…does the head move out and move around like it’s trying to make the image, but no burning is happening on the material?

Yes, it goes through all the motions but not printing anything

Ahah! Okay, hang around, I’m going to need to pull some screen shots for something I want you to check…it will take a minute or two.

Thank you!
I’ll be here… not giving up just yet

Okay, can you load your file into the interface, choose your material that you are using, and take a screen shot of the area of the screen shown below…I need to see what is listed in the Thumbnail column on the left. 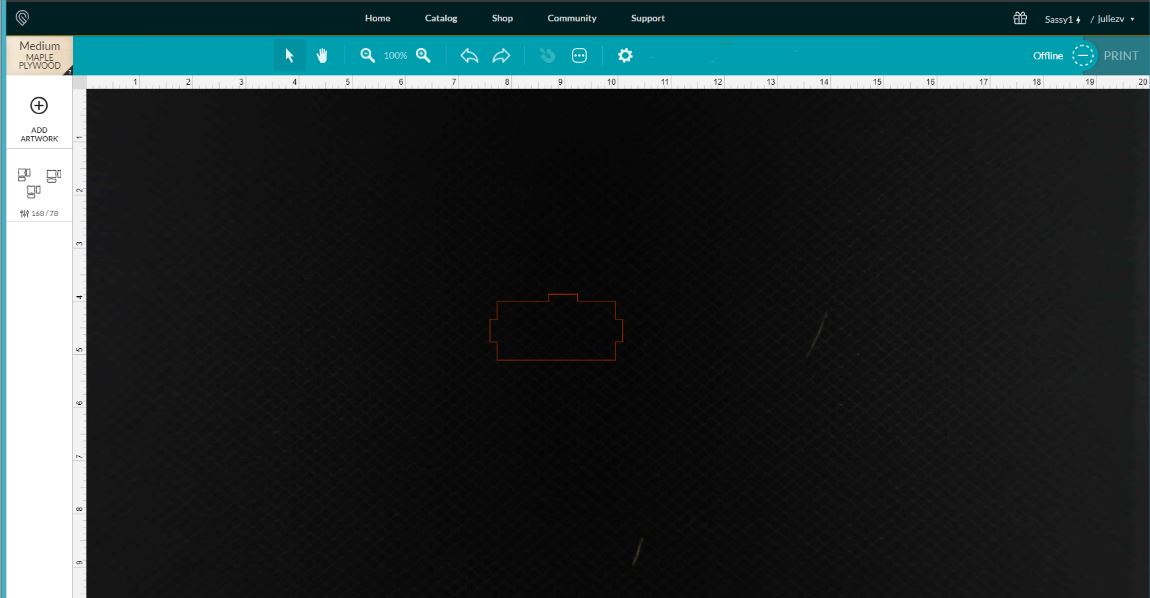 I can’t screen shot my screen, for whatever reason. but it says thick basswood plywood and then my image and then it says 1000/full

Okay, that’s a standard engraving setting for Basswood. The fact that you can see those numbers written in the thumbnail column instead of the word Engrave means that at some point, you clicked on the Proofgrade Settings (maybe to look at it) and it might have changed the default value.

At those settings, it should engrave just fine on Basswood, so go ahead and hit Print to see if it fires.

Windows Screen Shot shortcut: CTRL-ALT-Print Screen, then CTRL-V to paste it into your message. Mac is CMD-Shift-F3.

Wasn’t sure if you caught my last post…go ahead and hit Print to see if the laser is working. Those settings should cause it to fire.

No, Thats the problem. It isn’t working. No image at all… not from photos, not an image from google, nothing. if it isn’t preloaded into the dashboard it just won’t fire the laser at all.