Finally convinced the wife to let me hook my glowforge up in the basement in a very circuitous route… in a small room off to the side of the laundry. If only to knock out some coasters for her mom’s birthday. When she wants something, grumble, grumble… anyway. Picked up some foam, cut it to the size of the window opening, cut a hole the size of the vent hose and everything is golden for now.

Software is not my strong suit, despite being an IT technician. I always find myself looking for hardware solutions as opposed to fighting with software configurations. So learning inkscape has been fun… as I can’t seem to figure out how to draw in there, the issue is between keyboard and chair, I know this. But there are only so many times I can click a thing and it not do what I expect before whiskey gets involved, we say eh, press the button and see what happens. As a work around I design in paint.net, then export to inkscape, trace to path, and then attempt wrangle and weed paths to do what I want before saving as a SVG and printing. ( I LEARNED NODES YESTERDAY! WOO!)

So, forcibly ramming things into the old skullmeats in terms of learning the softwares associated with designing the vector files and whatnot. Its a slow process, as we are reluctant to change and I can never remember what I just did to get the thing I want to happen. But I find the best way to learn is to do, look at your mistakes and learn to hide them… maybe behind some filler and a coat of paint or fire, tough to remember that fire is a sometimes solution, like cake for breakfast, a sometimes food.

Now just to remember when looking for laser designs. its laSer not laZer, no matter how cool that Z looks in there.

That’s the digital design literacy equivalent of mastering fractions. There is so much you can do with whole numbers. But the fun stuff in math is when you get beyond the decimal point. Great job. Keep it up. Lots of tutorials in the Tips and Tricks.

Yeah… I figured out where the button was in inkscape to get them to show up on the paths and adjust from there by eyeball… I haven’t figured out how to math them sos I play with raw numbers yet. I hit the button and the little dots that let me adjust the line showed up… I might have done a little dance, it may have resembled a seizure more than a dance. But dammit I stand by it.

We might have advanced to the bronze age, but the digital age is somewhere off in the distance… with its flying cars and binary rain. I have prodded several of the tutorials in the tips and tricks area, watched lots of videos. Honestly video is my most hated way of learning stuff… I like still pictures with words that I can go back to and refer to as needed instead of trying to find the exact time in a video the presenter went over the piece of info I need while crossing my fingers and hoping the kid doesn’t start crying, or cat decide to test gravity with my drink, or any other million distractions that could occur. Stupid ADHD.

Totally agree, and that really made me chuckle!

Design software was where I hit a wall too.
@marmak3261 is great with inkscape, he (and a few others like Jules and @mpipes) got me over the learning hump.

It’s when you understand just a few fundamentals that you can actually start to make stuff happen, and you are coasting down the backside of that hump that it really gets fun!

, it may have resembled a seizure more than a dance.

I love your sense of humor!

The magic internet rectangles are good for a great many things. All hail the information pixies with their ones and zeros… alas I think teaching this particular meatpuppet to dance something that might one day be recognizable as a dance is well beyond them. But the tutorials on the design software are much appreciated in the meantime.

It can be hard to placate the monkey brain, what makes you pick up smooth rocks and shiny things, by pushing and pulling lines on a screen. But it enjoys pressing the softly glowing button and watching things appear. Though convincing it that pressing that button too soon might result in something better killed with fire.

All’s I have to say is I feel like I’m over here banging rocks together while ya’ll have already built a colony on the moon. But dangit, it makes me happy to think I may one day reach there.

I like to think words are a best used to evoke whimsically interactive images in the heads of those whom have imaginations. Or at least to make the stuffed shirts go, “Hunh? Why don’t you just say computer?”

Cause Magic Internet Rectangle at least makes sound exciting! Dealing with raw binary is like dipping into the mana of magic! Do not enter, here be wizards! I mean when you get down to it, we’ve managed to teach a rock to think by squishing it down and capturing lighting inside it, and then we made those rocks talk to eachother, by sending more lighting across other types of rock. And lets not even get into fiberoptics we caught the sun, put it inside a long clear rock, and turn it off and on so we can communicate with other meatpuppets behind other magic internet rectangles with their own lightning rocks, If that isn’t darn close to magic then I can’t wait to see what actual magic is!

Or maybe I’m just weird, I’ve been accused of such before. I take it as a compliment.

in the basement in a very circuitous route

I can give you a good excuse for it being so far away. I got mine in my garage shop (about a 30 foot walk from my computer room – aka mancave), and I am constantly going in to hit the button.
Wife mentioned it was good exercise for me, since I am 68 but do not power walk the neighborhood with her.
So, think of the walk as an expensive exercise machine (with benefits).

I meant circuitous by means of argument. It was too cold out in the workshop to run it. So it came inside, mainly cause I was afeard of the glass laser tube goin all splody if the liquid froze. Whereupon it sat, lurking ontop of a shelf (after I tested to make sure it was just the cold causing calibration errors and not something more sinister) Because it was too loud and I didn’t have a convenient way to vent it outside.

But the second she wants me to make something on it, we can overlook the loudness and afford some foam to put in the window, what I can cut a hole in to shove a vent hose through. Ie. I want to do stuff, “No.”, She wants me to do stuff, all gates are bypassed, go directly to start.

What she wanted BTW… and I fought with. Mk.1 is an inlay on draftboard, cause I was thinking of inlaying some cherry for the body and walnut for the black parts. I just painted and glued it back together so she could have a better reference for what is in the skull meats. Mk.2 Is also just painted draftboard, but the cardinal itself is just scored, and painted as I removed the masking to prevent overspill, I did not take my time painting. Mk.2 was the one she decided she liked the best. So that is what we went with… slightly modified because I didn’t like the lower branch being so, droopy? Mk.3 is on maple ply, I have to make 18, I can fit 8 per sheet. That number has just been upped to 20… lucky I can rapid print em. Mk.1 was at least easier to paint… though gluing the parts to myself was a danger. 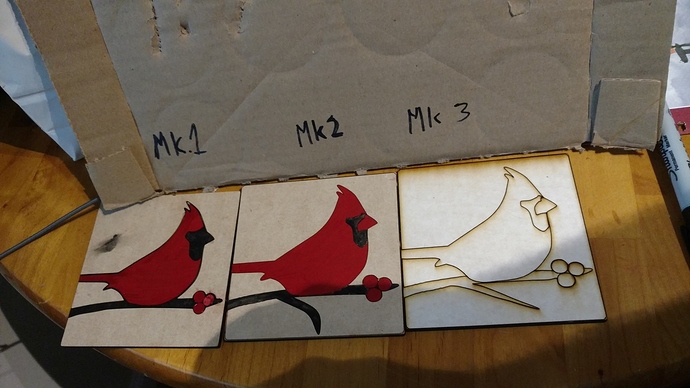 Thank you, though I must admit my software kung-fu is still weak. I feel I’ve at least earned a belt, albeit that its really more of a rope I found in the dumpster out back.

This is high praise coming from you.

Yelling, “By the power of Glowforge!” as I pressed the button did not turn me into HeMan, but it did make me feel better

I prefer the branch in Mk. 3 over the first two. And what do you know, cardinals do have red beaks. I see them in the yard occasionally and never noticed.

Yep, I managed to delete the path that separated the beak out on the Mk.1. I didn’t notice until I redid the paths for the Mk.2. I’ll admit, Mr.Jameson might have gotten involved after hour 2 of trying to make the buttons do what I wanted in inkscape, which may have contributed to the lack of noticing, jury is still out on that though.