That’s probably because that’s what I asked at the end of my post. lol

Sorry, I moved onto reading comments just before the “junglist” picture posts in your OP, and didn’t realize you had. Bad habit in an effort to catch up.

Haha I think most people had stopped reading by that point (some people didn’t make it past the first sentence). It’s good you reiterated with more detail so at least the question was addressed. Cheers!

It would be nice to have it be able to generate an expanded border without having to pull it into Photoshop. That’s one thing that I do on more cuts than anything else

A similar feature is to create a cut line around an engrave. No offset, just a crisp cut. Makes the engrave more distinctive. That would be nice not to have to do AI/Core/etc.

Yup. I do this on all my engraves as well. Especially on foams that can curve up at the edges and have to be engraved on the lowest power which really just changes the surface texture instead of removing material.

So… turns out I don’t really have any markers. I thought I had a bunch. So I tried my best to show what I was talking about with superfine tip crayola markers. Which is probably the opposite of a thick marker. Lol. I also tried to draw a random shapes that would not work just with duplicating the shape.

Here’s two shapes and the traces. Most markers, except for brush, have firm nibs and, when held at roughly the same angle, you get a really consistent width. You’d get more width with larger markers – maybe chisel nibs would be easiest? Anyway, even with the less-than-ideal markers, this was fast and really easy (again, subjective. My 7 year old nephew couldn’t do this. My 11 year old niece could). Tracing an existing line is way easier than trying to make a second parallel line freehand. 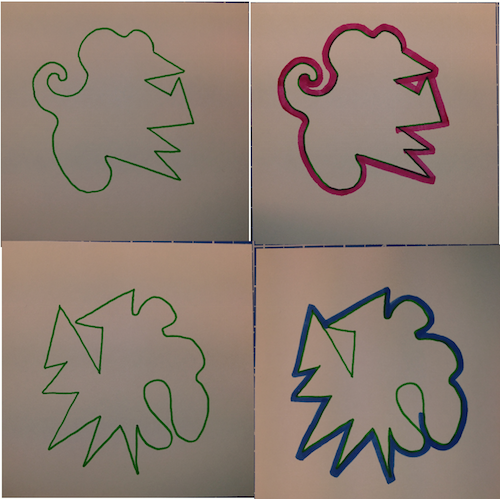 Here’s how those cut lines would work. 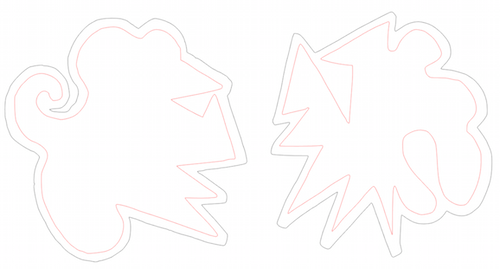 Not perfect. Learned some things that would make for better results next time. Different markers would also be helpful. Again, just a work around. Certainly not the only way to accomplish the exact same thing. Just a quick alternative to just trying to draw a second line around the shape.

I just skimmed through this quickly, so forgive me if I missed some explanations along the way…you guys are discussing an Offset path function.

(I’m pretty sure we aren’t going to get one in the initial release, but it might be an idea for the hopper if we asked later.)

The good news is, with a few extra steps, it’s pretty easy to create that effect in any of the drawing programs - AI, Inkscape, CorelDraw.

You would need to scan the drawing, perform an auto-trace from within the drawing software to create the outside cutting path, then Offset it, before saving it.

(Basically by-passing the trace function in the Glowforge entirely.)

We could probably work up a few easy tutorials for anyone who might want to try it…we’ve got lots of experts running around. It really is just a few steps.

Please
I know I would benefit, and I’m probably not alone!

No prob. Give me a day or two to make it pretty and I’ll knock a couple out.

My neighbor has just lost his dog, we’ve got an all out dog-hunt in progress. (Little escape artist.)

No rush at all, thank you!
had a neighbor who’s greyhound bolted through the door and we started chasing it, I took about three strides before I realized what I was doing. Yeah, chase down a greyhound, you bet!

This discusion of tracing and outlines and offsets is what got me to try out my stick figure stickers. The Silhouette software put cuts on either side of the 4 pixel wide path, when I chose the inside and outside cut and not just outline cut.

I came to the same conclusion when a German Shepherd chased me on my paper route as a kid. There was no way to outrun him so I just stopped mid-stride and froze. He was unable to stop ran right into me a microsecond later. He was confused by events long enough for the owner to catch him.

Not sure if you knew, but the silhouette software has an offset feature as well.

This is a video with the older software, but it`s very similar in the new one too.

I grew curious about how trapped voids work as you get enough outset to eliminate them (in inkscape).

Turns out when you get big enough of an outset it WILL eliminate the internal voids. And that it is a complete (no memory) elimination.

Nice. So it’s kinda like dilate/erode in image processing?

Not familiar with those. So… sure?

This is the rub with “do all” products; inevitably they won’t do something.

I’ll do my designing with design software and I’ll do my lasering with the laser software.

I think I follow. You’re right, we don’t have that, and I’ll put it in the hopper.

Sweet. I can see expanded outlines being used quite a bit. I know I will be =P.

I can see myself offset cutting things like stamp rubber and sticker sheets a lot, actually

I know I can use AI to upload an SVG file to the glowforge, but can the glowforge export scans as SVG files I can then port back to AI to clean up? I’m currently trying to copy some of my old leather templates into forge files and haven’t been able to get far.