I was recently working on a box for my Catan set. Unfortunately, I didn’t think to engrave the design in until after the box top was assembled, and at that point it was just about exactly 2 inches high. I was able to successfully do the engraving, but discovered a couple of things I thought worth sharing with the community. 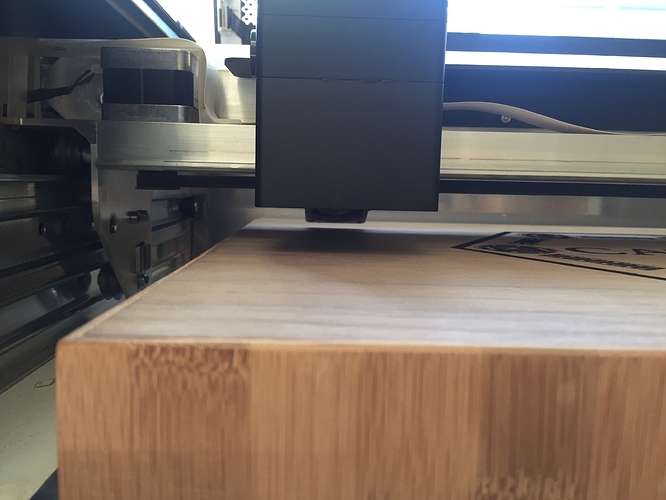 First, I ran up against the fan shroud. While the laser itself had clearance with the crumb tray removed, the shroud just barely didn’t. It didn’t stop, but it did scrape across the surface when I went to do a test. I ended up removing undoing the four screws, removing the shroud, and putting the screws back in to keep the fan in place without the shroud. It’s a kind of tight working space to get those screws out, so I’d recommend moving the laser aside before doing it to ensure you don’t accidentally touch the lense. I’d have been a bit more nervous about doing this if I was actually trying to cut, but all I was doing was a light engrave so I figured the air direction from the fan wasn’t as important as it would normally be.

Second, I needed to figure out how to center my design exactly on the box. Here’s what I did. First, I taped a scrap of paper on the box top. Then I measured out the center and marked it in pencil with an X. I added a small circle to my design, centered it on the pencil mark in the interface, and set it to engrave really lightly, so it wouldn’t penetrate the paper. I compared where the laser mark showed up on the paper with the pencil mark and then adjusted the position of the circle until I got the one to end up on top of the other. Then I set the interface to ignore the circle and centered the design on the circle in the interface. My final engrave came out perfectly centered.

For material thickness I used 0.5 inches, the maximum the interface would let me. This would correspond to a height without crumb tray of roughly 1.9 inches; the 0.1 inch focus error didn’t seem to be a big deal for my engraving.

The result is shown in the picture below. The fuzziness toward the back is just the photo focus; the actual engrave was sharp all around. 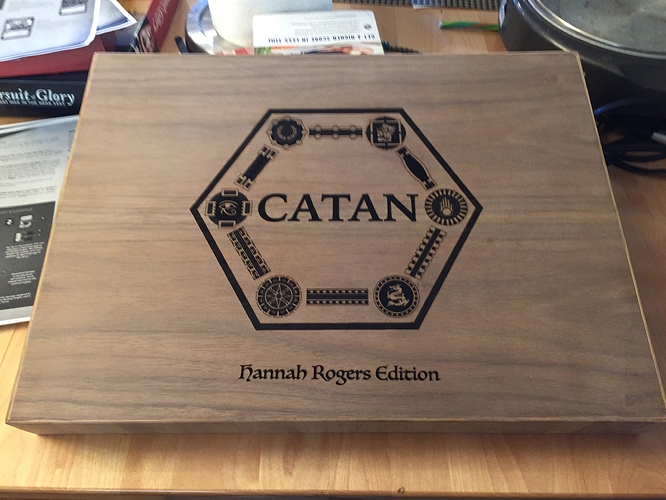 Thanks for sharing your experience. The engrave looks great. I’m pretty sure I will never unscrew the tiny screws or remove the shroud. It would be faster for me to remake the box lid.

Thanks for describing your process—I think this will be very helpful.

That’s a beautiful box, no visible finger joints. Did you cover the sides with veneer?

I also had issues with the fan shroud for some material that was just under 2" (1.95"). I was dissapointed to realize my glowforge doesn’t quite have the 2" clearance.

But didn’t think to remove the fan shroud! that’s going to save my project!