Bearing down on us, we’re through with this, right? 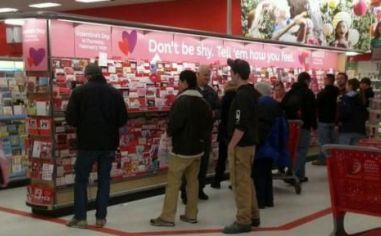 That woman who gave you her future is worth all else from you - right?
You have a laser Right?

My work here is done.

Mine doesn’t know how to use it. (Screwed again.)

Works both ways. I need to get cracking too!

You could probably guess the chances of me recognizing V-day. Great thing is the wife would far rather receive special appreciation on a few random days during the year than have it forced.

The wife is just as cynical as I am when it comes to enriching Flower shops, Jewelry stores and Hallmark. She asked for a battery powered drill for her birthday.

The way it works for us is, we make all our cards and jewelry for each other. That just leaves chocolate.

Hahaha! The slogan is hilarious in the photo.

Captain Awesome - “How I feel? Why are there so many bloody choices… can’t they just not make one with a big heart?”

INCLUSIVE TIP: Non-heteronormative gentlemen can also use the GF to make cards for people who are not women.

So can women. It’s a great idea.

That path leads to venn-diagram madness or if/than/else spaghetti code hell, but yes, quite true.

Footloose and fancy-free here sooo… I tend to keep the unwanted stalker gifting on the simpler side. It’s faster to hand-cut the headlines out of newspapers and magazines to re-form them into other messages, than using the laser to do it.

Yes, and then there are no incriminating machine logs as evidence.
“I rarely make plans, because then the word ‘premeditated’ starts getting tossed around.”

I luck out in that my wife’s birthday is close enough to Valentines Day where I can get both cards in 1 stop. The extra bonus is that the Home Depot near us has cut flowers, so I always stop in a day or two before Valentines Day and catch her off-guard. The rough one was when she wanted to come along one year - told her to look around in the garden center while I grabbed what I needed. Ran a bouquet out to the car then found her & said they didn’t have it & I was annoyed and wanted to leave. The look of confusion on her face when she saw roses on the passenger seat was priceless - especially since it was like the 10th or 11th.

That’s what you’re after, that look on her face. Then you know you hit the target!
Occasions like VD are ok, but the random unexpected event pays a bigger dividend.

Yeah, you don’t get points for doing something special on V-day, Anniversaries, etc. The best you can do is not to screw up. The worst is to go down to the courthouse and file papers. Never started, never expected.

On the other hand if every few months on a completely random day you do something extra special your partner will inevitably ask, Why? The answer “just because I love you”, gets a bucket of points.

Of course if the relationship has mistrust and paranoia, being extra nice could go wrong too.

“I rarely make plans, because then the word ‘premeditated’ starts getting tossed around.”

My Intro to Psych class repeatedly taught us addiction is best created by the random occurrence of reward combined with a random magnitude of reward. Not hard to code something up that spits out random dates and cash amounts. Just a little more work and you could hook it into Amazon and their wish lists (and don’t forget to have it email you the details so you’re not caught unaware.) The question is do you really want her/him addicted to “love”.

Note: no need to link to the song. Just typing the last sentence now has it playing on repeat in my head.

Addicted to love I think is preferable to each just taking the other for granted, it’s way too easy to do that.
That is a lesson from our 39 years together, and we are still good friends.