Close to 80 degrees today in Denver, with another epic storm powered by another extreme low pressure system sucking Gulf moisture to the North. Blizzard warning, stay safe if you are in the mid-west.

Yeah, I saw that. I know you can bet on some type of snow event this late. My nephew just moved to Salida from Minnesota. Welcome to Colorado, just in time. Curious as to what will happen.

Salida will make out better than MN. according to the forecast. He will also see the rebound to spring weather we enjoy here in Colorado.

I just saw the forecast. Is it my imagination or did “bomb cyclone” pop up as a “thing” only a couple of years ago?

I feel for you. We finally had top-down weather this weekend. Late for us. And now it’s been raining for two days

I am fascinated at the development of weather terminology. Part of it is the 24 hour news cycle and the global news infrastructure. I had never heard of lake effect snow at all until I was in my early 30s and started watching the weather channel.

Of course, the whole thing of naming winter storms in the US by the Weather Channel bugs me. But that is what branding does.

There have been some bomb cyclones that have made an impact in northern Europe and the US in recent years. From what I see, the term has been used for almost forty years. I’d say folks are much more likely to remember weather outliers these days with climate change discussion. But it is funny how terms suddenly get energy. I kind of like “explosive cyclogenesis” as a band name though. 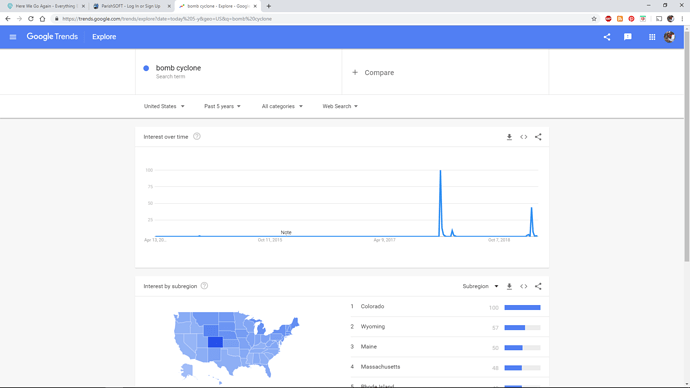 Like we talked about a few months ago. Fraught suddenly seems to be trendy, but from analytics, it really isn’t. 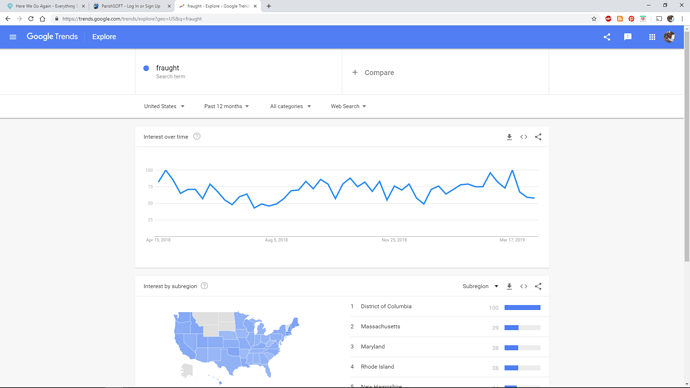 Yep. 100 miles north, and similar. We’re not expecting a lot, and frankly, we’ve had more than our share of false alarms as far as major storm systems go. Stuff just sorta blows past us.

I kind of like “explosive cyclogenesis” as a band name though

Except it reminds me of a bad digestive condition

Stuff just sorta blows past us.

Yeah, here in the summer along the front range I see these systems roll east off the Rockies, hit the thermals on the plains and explode from that energy. I watch massive thunderheads anvil out in the stratosphere and feel sorry for anyone east of me.

. Is it my imagination or did “bomb cyclone” pop up as a “thing” only a couple of years ago?

I’m thinking that a barometric pressure drop of 24 millibars in 24 hours just didn’t happen that often.

I’m frankly a little surprised you are seeing anything at all, or that it’s not just rain. So far today, we’ve seen at least 3 different forecasts that directly contradict the others. I’ll just expect that maybe it will snow. it probably will be windy, and it will be gone by Friday.

The earliest written record for bombogenesis that we currently have is from a thesis submitted for a Master of Science degree at North Carolina State University in 1989.

This matches my recollection of when the term came into use by meteorologists.

I am recalling the storm that blew into a hurricane in mid -January in the northern part of the Gulf; blew across to Jax (where a lot of friends had their Ren Festival blown apart; and out to become a hurricane again before blasting the Eastern US.

My first awareness of it was the Meteorologist explaining how sometimes their models just go nuts and create all sorts of weird things that they just toss out, and this one they had been tossing out for a while but it just showed up more and more often so they thought that even if they did not believe in it, they needed to talk about it. Sure enough 24 hours later it happened just as the models showed. Nobody had a name for it at that point.