Well my second unit has been up and running for two weeks. (The first had an issue that could not be solved remotely.)

I’ve been following the various post on etching ceramic tiles, and thought I would throw in a couple of examples I’ve played with.! 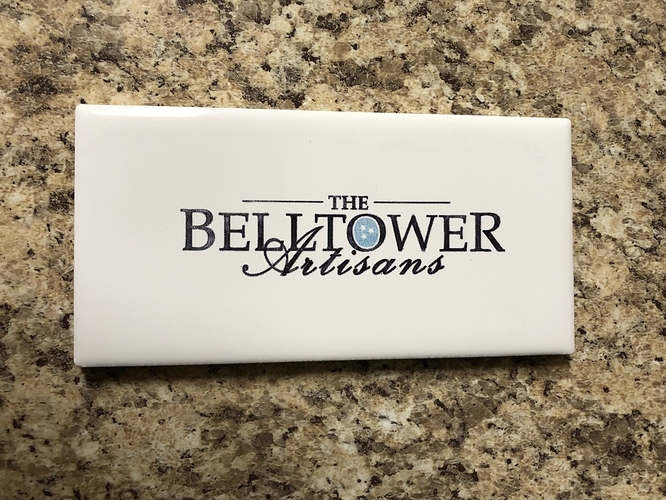 IMG_0131.jpg1154×866 384 KB
(Speed 600 | Power Full | LPI 225) The blue was colored with a turquoise Pilot pen, and the black with a Sharpie marker.
This is the logo for a local company that started last year as a popup shop; coffee shop in the front and pottery study in the back. Unfortunately, his mom claimed it and it is now sitting on her desk at school, and told her son he can only have a photograph. I guess I will need to make another.
32 Likes
kennyb April 6, 2018, 2:03am #2 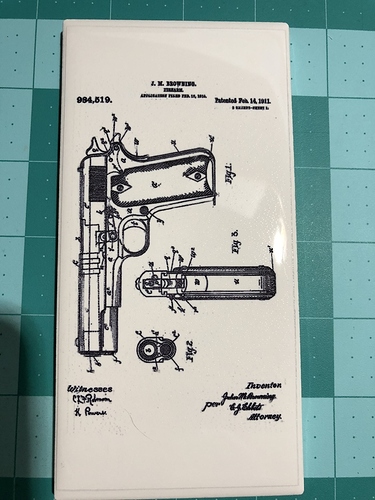 IMG_0132.jpg866×1154 281 KB
This is first page of figures from John Browning’s patent for what became the M1911.
(Speed 400 | Power Full | LPI 450) The black is from a Sharpie marker.
I slowed the speed on this one after noting that the first tile seemed a little shallow on the depth and the step over was ridged so I increased the LPI.

I like the idea of the marker, or maybe a paint pen to bring out the details. But am thinking about pulling my screen printing equipment out and trying plastisol ink with a squeegee to apply and then running it through the conveyor oven to cure. This wouldn’t be worthwhile for the occasional tile, but might be an option if someone wanted to etch tiles in a production style environment.

Have a great evening. K

You’re going to make me want to tile my workshop with the 1911 schematic tile! That’s awesome!

Those both turned out great - i really like the touch of blue.

Oh man, so much fun stuff to try. There are not enough hours in the day!

Both are great, but the blue makes it pop!

These are great!
Where did you find that patent page? I love these types of diagrams and I want to experiment with them some.

I use to go through the US Patent Office website, but everything is also available through Google.
https://patents.google.com
Their interface is easier to search through than using the government site.

everything is also available through Google.

Ooooooo, these are very nice!

Both are great … But … The blue really adds to the first one!