How blurry is too blurry for the lid camera?

Got my replacement 'forge today. Amazing turnaround, as I ran into issues with my first unit only a few days ago (laser tube wouldn’t fire). This one came right up and happily churned out a handful of Founder Rulers for me and the kids–yay! (They were thoroughly entertained, too.)

One observation, though: Damn. The lid camera image leaves a lot to be desired. If this is how blurry it’s going to be, I don’t see the Trace feature being at all useful. It does immediately recognize the Proofgrade materials, but as you can seem from the screenshot fragment below, the QR code and text on the label in the corner are only barely readable: 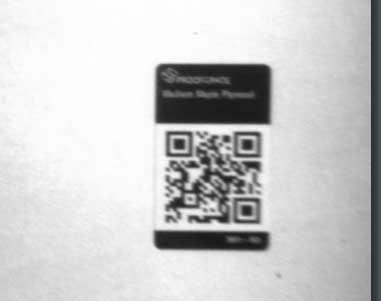 I’ve poked around the forums a bit now, and I see a couple of threads mentioning blurry cameras, but I see no authoritative statements on what is acceptable and what isn’t. Thoughts?

(I certainly didn’t buy this thing to use the Trace feature, but I had imagined it being used by my wife’s students to make puzzles and other simple projects where the kids would draw on a material and we’d cut it out. With the camera as it is, though, I’m skeptical that those kinds of projects will turn out well. Bummer.)

It’s a flattened fisheye picture, so the resolution is dramatically better in the center under the camera than near the edges. It does reasonably well for trace on my unit near the center. For precision though you’ll want to draw directly in Inkscape or CAD.

Thanks markwal - Yeah, I figured the corners were victim to fisheye correction. The center is still not awesome, but…it’s what it is! Not a huge deal. Or, if it becomes a huge deal, I’ll just use my flatbed scanner and vectorize.

I nolticed that my second unit was a LOT blurrier than my first unit…so I checked the camera and found it hazy…maybe a cleaner from the factory? I gave it a good wipe and it got much better…although, still not as good as my first unit. The camera is more blurry, but alignment is better. You can’t have it all right?

Each Glowforge unit’s focus is evaluated by a computer vision system at the factory before it’s locked in place.

The answer’s a set of parameters in our test software. But each Glowforge lid camera should be sharp enough to read barcodes in the corners, and much sharper in the center.

The answer’s a set of parameters in our test software. But each Glowforge lid camera should be sharp enough to read barcodes in the corners, and much sharper in the center.

Thanks Dan. By that definition, mine is certainly ok–no problem with the Proofgrade codes yet. Everything working. (Major props to your support folks for the ultra-quick diagnosis and exchange of my first unit, btw. All’s well that ends well. I’m finally burning stuff!!!)

I’ve had blurry bed images a couple of times, but clicking refresh bed image in the GFUI has always made them sharp again.

Its our Day1 with GF, we seem to have a similar problem of blur & alignment here. I checked the lens its not loose too.

The bed images seem blurry for us. For example this image is a fine “D” etched by GF earlier today (We are trying to cut a shape around this “D” drawn in red below) 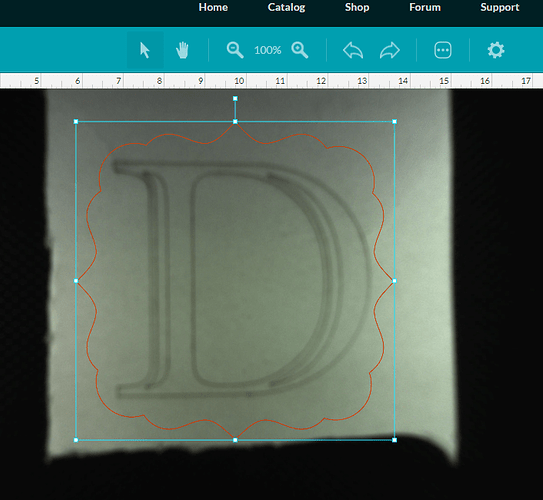 Note that after we give the print command for cutting the outer border, the cut is like this:

Please can someone help us in achieving WYSIWYG cuts. Thanks in advance!

Right now, it’s very difficult to use the lid camera for alignment, since they are still working on the algorithm for it behind the scenes.

Any time you have an operation that has both cuts and engraves in it though, you can make them line up perfectly in relation to each other if you include both the cuts and the engraves in the same SVG or PDF file before you open it in the Glowforge interface. (You align all the parts the way you want them in the file before you save it.)

It’s easy to create those kinds of files in any outside drawing program like Illustrator or Inkscape. There is a tutorial below that describes how to do it in Illustrator, but you can do the same thing in Inkscape or CorelDraw or Affinity Designer. (Lots of tutorials for those too.)