How do you explain the Glowforge to others?

I LOVE bragging about the GF but I always run into the issue of explaining what it is to people. They just don’t seem to understand. Lol. I generally end up just showing them the promo (since it’s so well done and inspiring) but even then they still end up thinking its either an ink printer or 3D printer (I’ve even had one thinking it was a pen…). So, how do you go about explaining it? And, have you had any funny moments when doing this?

It really depends on the person I’m talking to. I start with saying that I’ve ordered a fancy laser cutter/engraver to come live with me, “sort of the Mac of the laser world,” and that aside from working on most materials except metal, it also automatically recognizes drawings and will engrave them directly onto my material. As an example, I mention that you can put certain things in, like a MacBook or an iPod, and it will recognize it and engrave directly onto it. People are mostly intrigued, and then I go to the video. If I’m talking to an engineer, I say it’s a 45W CO2 laser.

Haha, I like the “Mac of the laser world” Im going to gave to use that.
Thanks!!

I just show them the video, and let it speak for itself.

People may know what does after you describe it to them, if you show them the video they will understand what it does.

So far, I have found that telling people it’s a laser cutter is sufficient. I guess the name is pretty self explanatory

Most people seem to understand what a “laser cutter” does and spend most of their time asking how thick it can cut, what can it engrave etc.

I haven’t tried explaining it to my grandma yet, though

“These guys figured out a way to create microscopic suns, box them up into a few inches so they don’t explode, and then they built a chassis for it to ride around on and selectively open the window to let BURNINATION to occur!”

At least that’s how I described it to my 85yo mom.

“A tiny sun, concentrated on my inner lip” is how I described the first (and last) pinch of chewing tobacco I ever tried…

Wow, that’s twice in 2 days that you and I are in sync with naming something…

Well, a 3D printer is like a robot with a tiny little hot glue gun.
And a CNC mill is like a robot holding a drill, except the drill can move sideways.
And a Glowforge is like if you gave that same little robot a light saber.

Light saber. I like it. Thats gonna be my new way of explaining it! Haha! Thanks Dan.

O please, O please can some of our artistic illustrator Glowforgers, (@rebecca😏) illustrate this image. Or I can see @smcgathyfay do some cool acrylic figurines. 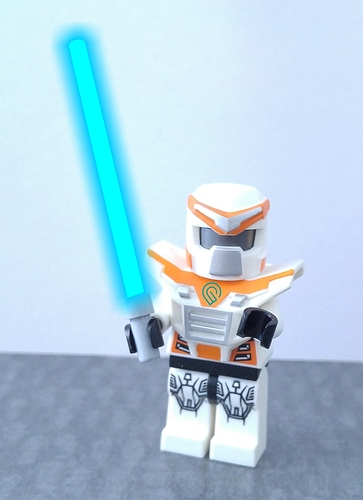 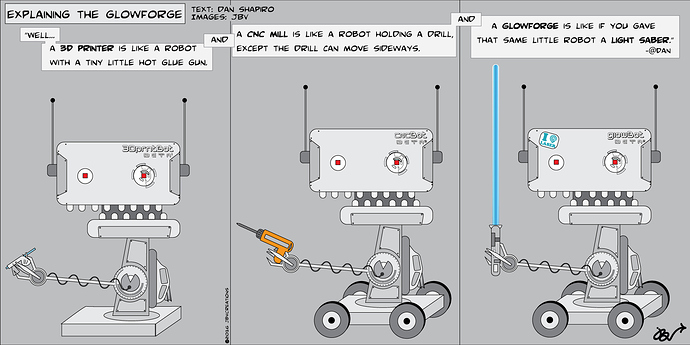 This is fantastic! Such very smart thinking…to be able to illustrate the differences. Great work, jbv!

I think @marmak3261 and @jbv have nailed it. Nice work folks!

Yay! This, exactly. Thanks @jbv and @smcgathyfay and @dan for some great collaboration.

BAHAH! You just won the post of the week award (as given by me lol)!