How I spent my weekend (not lasering) 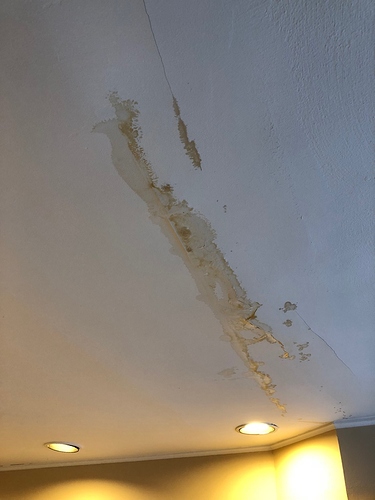 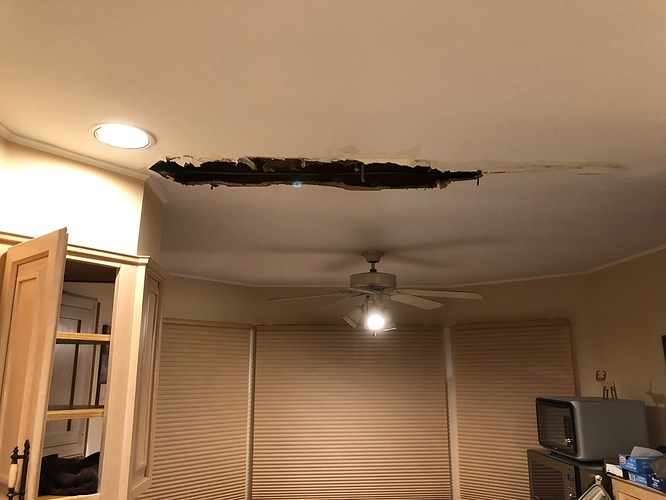 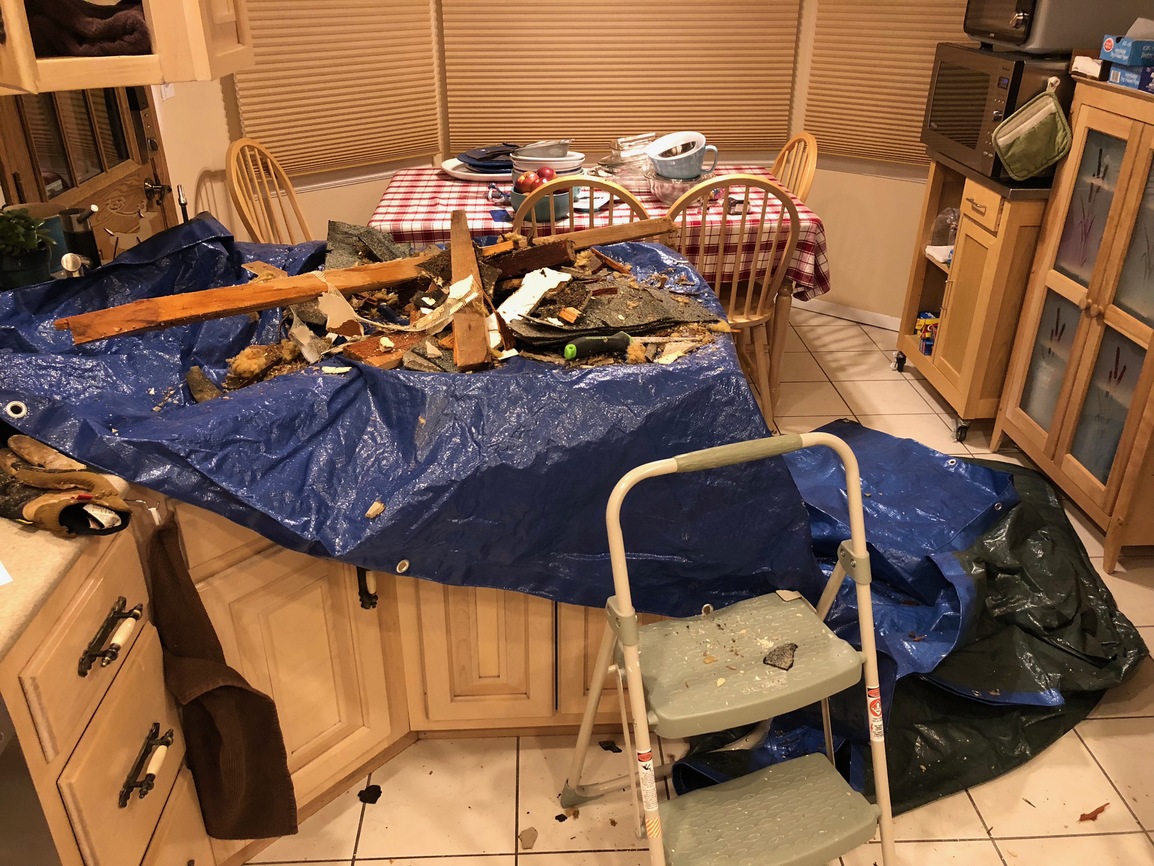 The stuff homeowner nightmares are made of. Frozen pipe?
Man, I hate sheetrock work, especially upside down… but first - you have to fix the leak.

Yikes!
That’s going to take more than a few sheets of PG material to fix.

Was that snow or rain or 2nd-floor bathroom? If it’s the roof, how bad is the outside?

Gosh! So sorry for you.

Yikes! Not something you want to see…ever!

Ouch. I am very sorry to see that. I hope it’s not more severe than it looks.

Ice dam. The biggest problem is that it dripped for 2 days while we tried to figure out what to do or get someone to come look at it. I’m handy around the house when I need to be, but 1. we have a complicated and difficult roof, 2. I don’t have the right tools to do the job safely, and 3. I hate this kind of work and would rather pay a professional. Apparently in the midwest, this happens a lot and there are services that will come with steam guns and remove the ice. Not so where we live, and being relatively new to this home ownership thing, we were sort of at a loss for the next step. 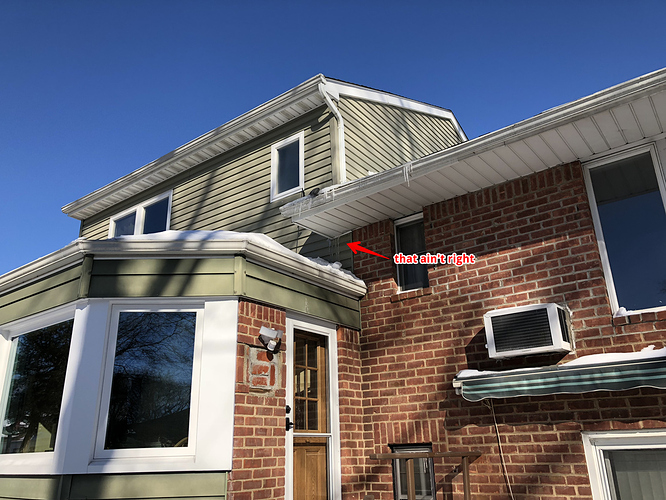 I figured that it probably wasn’t a plumbing leak, and we tried to enact some Internet remedies for ice dams with no success, so once I came to terms with the fact that the ceiling was going to have to be fixed anyway, I started opening it up to see where it was coming from.

Here’s the livestream of that, by the way:

Today I decided the only thing for it was to spray the roof with hot water from a nearby bathroom window, so I rigged up a garden hose to the faucet and drenched it until all this ice was melted: 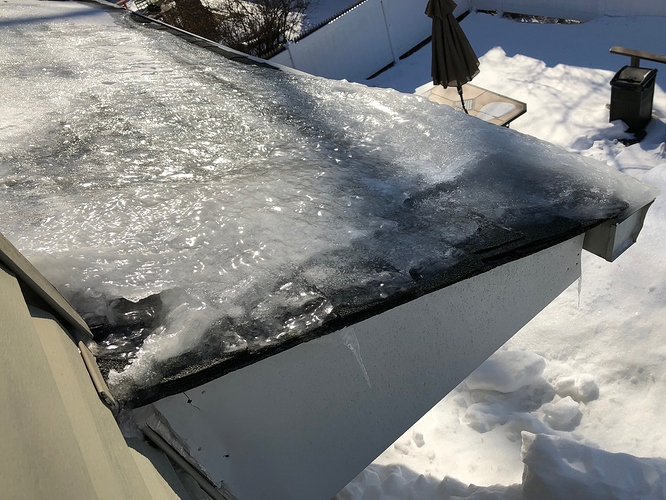 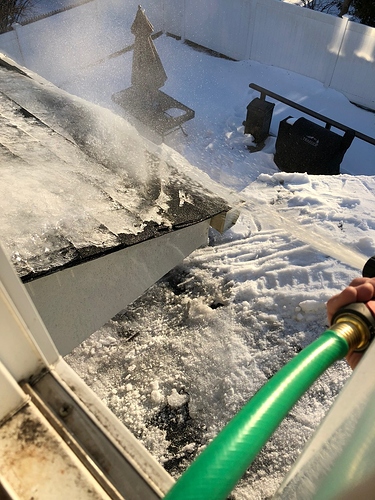 and loaded it up with ice melt to try to stop it from just re-freezing. And the good news is that the dripping has stopped.

Now we need to fix it, including putting some much-needed insulation up there to reduce the chances of this happening again.

I used to use calcium chloride when I had ice dams. Then I solved it by adding heat tape. After adding the heat tape I think I only used it once, then permanently solved it by selling the house.

Florida is starting to have some appeal…

but if it’s between ice dams and Glowforge overheating, I’ll take the ice dams.

nasty. far worse than mine, which was a frozen pipe. worried that it might be bad when we got up and realized we’d forgotten to drip the bathroom sink overnight to keep the water flowing and… oops, no water flowing.

luckily a heat gun right at the cutoff valve in the crawlspace mended the problem and no burst pipes.

wish your solution had been as simple and with as little damage. this cold wave has been a bear.

Our house came with some unwritten rule that states every repair must cost me $6000. I hate that rule.

I think I’d be more upset if it were a leaking pipe, since it probably would have involved a lot more demolition. Trying to look on the bright side. Which is difficult, because tomorrow’s forecast is for freezing rain.

Argh! Hope the repairs go well.
Check the attic ventilation while you’re at it - that and insulation work in concert.

Make sure to contact insurance. When we had ice dams a few years back, they covered all the damage. I think it ended up being between $10-20k in repairs (2 family house with water damage in both units, plus electrical work due to finding more knob and tube hidden in the walls when they opened them up).

My condolences. I have had some water damage before, I know the feels you are feeling.

You did the right thing, tearing out the soaked sheetrock and thawing the dam. It would keep dripping and soaking up water expanding the damage.
I really can’t believe the shingles and debris up there.

I have to admire your attitude in the midst of that nightmare. The advice about insurance is right on. Call your agent. That’s what you pay the fee for. It’s expensive - until you need it. it will be over in a few days… As long as there aren’t too many similar situations locally sucking up the repairmen.

I would also add that if you feel like there’s still water soaked in to things that ought to be dry, your policy probably will let you call a remediation outfit like Servpro before all the insurance paperwork is done. Water can do a lot of damage if it continues to sit in place and soak into things, and damp drywall and wood can also grow mold. Get that place dried out pronto!

I was away for the weekend and came home to a frozen water main. I killed the power to the pump before we left, just in case we lost heat and burst a pipe. The -14F (-25 degrees scientific) degree temps on Sat night were enough to freeze it where it enters the house through an unheated bulkhead. It took me about 20 min to sort out with the torch.

One of the many reasons I hate winter and home ownership - ice dams. I just had my ceiling repaired for the second time after having the roof repaired three times. I ultimately had heat cables installed. I hope your insurance company does the right thing.