How low can the GF cut/engrave?

The light nanosecond has an awesome history.

I was just talking to our CTO - don’t plan on that clearance being correct. There’s a protrusion further back that’s the limiting depth. I’ll figure out what it is at some point, but for now, consider it an open question.

Such a cool woman. She seems really well grounded. Talking with people from back then is such a different experience. I love talking to my grandfather(96 - robert redford played him in a bridge too far) and my great aunt (shes 102 - she helped develop the gas chromatograph), because they see the world in such a different way than we do, yet achieved so many great things. Its a whole paradigm shift to try to see from their perspective. Sometimes I am jealous of how few distractions they had before the internet.

Its also pretty remarkable to see how much our modern vernacular has changed since then, as well as the necessity for understanding on much more extreme scales. Strangely enough, I have spent very little time ever considering distances traveled by light, when not originating from a star. This bridges a gap I didnt even know I had in my conceptual model of the world! It was a really cool video to see! Thanks for sharing.

Your grandfather was Julian Cook!?

Your grandfather was Julian Cook!?

@takitus
Someone just got moved up on the beta list. LOL

@Dan My grandfathers name is Moffatt Burriss. Cornelius Ryan wrote a good bit about him and his exploits in the book, but when it came to the movie they needed a bit more for Redford to do, so they combined the actions of three different soldiers into a single role… my grandfather being one of them. We go back to Holland every 5 years to celebrate their liberation from the germans and they honor the remaining soldiers that took part. Part of the ceremony is the reenactment of the paratroopers jumping in, which my grandfather still takes part in, even in his 90s. In 2009 we had 2 documentary crews following my grandfather and our group around to travel to various important locations and record what he had to say about them. My grandfather did a Q&A after the documentary that has some pretty entertaining stories in it. Im pretty sure I have it online somewhere…

He also fairly recently released a book about his experiences called “Strike and Hold”, It was originally entitled “Paratroopers dont stop for tea”, but the publisher thought it best to change the name as to not offend the british. =P

This is one of the scenes where it was redford protraying my grandfather, which they had to tone down quite a bit. In reality Carrington was in his tank, and when he wouldnt cross, my grandfather held a gun to his head, to which Lord Carrington responded by ducking into his tank and sealing the hatch! They didnt speak again until 2009, when they took the stage together to receive an award from the queen. They still kept a guard between them just in case 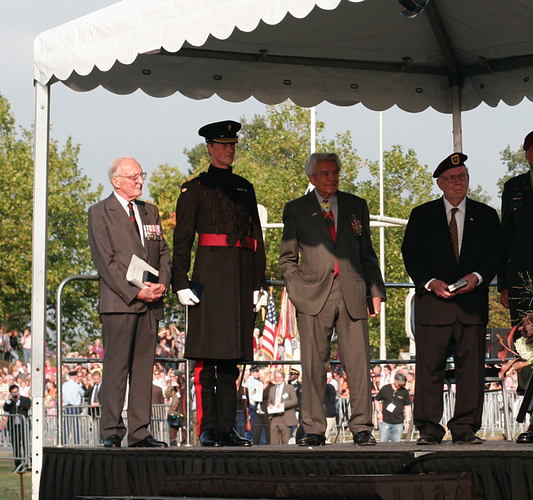 My grandfather is on the far right, lord carrington the far left.

Nice piece of National/family history there!
You are fortunate to have that period documented.
Kids today will have a very rich documented history of themselves in their old age.
There might be a total of 5 pictures of me from the mid '50’s.

Great story of a great story. What a wonderful legacy for your family and descendants.

Oy! It’s only you Yanks that use the least accurate of all measurements - the inch!