How to Remotely Monitor Your Glowforge For Problems

I’ve been working on a large project for Christmas and spending between 4-6 hours a day cutting plywood and cardstock. I can’t sit in front of my Glowforge the whole time monitoring it for flareups or fire and still be productive.

Solution: Google Hangouts… Google Hangouts works with a laptop, tablet or phone. By creating a hangout and joining on my laptop and phone I can see the video from the laptop on my tablet and watch the machine while I am in another room or even when at the desktop with my back to the machine.

I also used this method when streaming Facebook on the Glowforge User Group today! 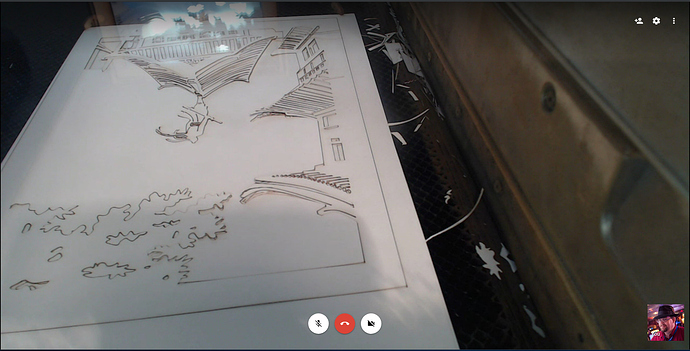 Here’s how to set it up:

We have seen four fires reported in the last week from users who elected to leave their GF unattended. We have video of those fires because they had a setup like this. This behavior is dangerous. The Glowforge should never be left without a person in the room watching it for fire.

I totally understand what you are saying, but I can’t be looking down at my glowforge forever. I have been wanting to set something like this up just so I can sit down in my chair, which is 1-3 feet away from my GF and still see it.

That is your decision, but the last fire I saw on video went from a small flare up to damage in about 15 seconds. Being next to the Glowforge is the only way to ensure it is used safely. You are also using wood products that will catch fire if given the chance, making your specific use of this even more dangerous.

How productive are you going to be if your Glowforge catches on fire and has to be repaired? You may want to look at your workflow to see if there is any way you can modify it to allow you to use the Glowforge safely.

The only materials that are safe from flame and are also safe to use in the Glowforge are those that will not burn - metal and stone specifically. Plastics and wood products will catch fire if they get hot enough. Engraving operations have a lower risk of fire but can still catch. The only way to prevent damage to your Glowforge in the event of a fire is to be close enough to extinguish the fire by opening the lid and smothering it with a wet cloth or using a Halotron fire extinguisher. I keep both by the Glowforge while I am cutting to ensure that I can respond quickly in the event that a flare up turns into a fire.

First, let me say, I’ve had a house burn down, even thought my son was in it. Last thing I ever want is a fire.

But again, I’m talking about one chair I can literally touch the glowforge and the other chair I could touch if I leaned far enough. It is the actual standing over the glowforge that I can’t do. So if I could stream to my laptop next to it at least I could sit down and work at the same time. I could be at the GF in less then a second.

And as for productivity, I don’t want to kill my GF as it isn’t in my budget to repair. I use it strictly for my enjoyment, no selling, so I would be hurting my emotional well being, not my $$ bottom line.

There is a lot of concern being expressed–but it’s always a risk and only you can best determine what works for you with given jobs and situation.

I admit I rarely stand over my GF watching every job, though often at my computer where I can just turn and look into the unit, but sometimes within feet at a work table (with jobs/materials have used before), and sometimes dash down the hall (etching only), but always within earshot.

But certain materials and designs, and especially new material & tight pattern, and nearly all cutting, I do watch, and I even have hit the button to pause it when there was a lot of smoke and flare up, and only restarted after it cleared away, but continued to watch and repeat until job was complete…

You’re not the first in the last 2 years I’ve been on the forum to come up with a remote viewing system–but the first since so many reports of fires. The laser is basically high tech book of matches, and there’s always a risk playing with matches that things can go wrong–and very, very quickly when it does.

Complacency is dangerous–so always be cautious, and do make sensible choices that best balance the risk/reward for you.

It is the actual standing over the glowforge that I can’t do.

I’m with you & I appreciate the creativity of your solution.

) I have even been known to leave it running when I go to bed. Do that with my 3D printer with its hot ends and plastic filament.

But then I routinely tempt fate - I drive to work most mornings and I even ride a motorcycle long distances long into the night.

Everyone has different risk tolerances and there is no absolute safety - even when it comes to leaning over your Glowforge and staring at the bright light until your eyes hurt.

I’m with you & I appreciate the creativity of your solution.

Just want to clarify, this wasn’t my solution. I just commented on the post. I have a WYZE camera I keep meaning to hook up but since I already have WiFi issues, hate to add something else near my GF. I just appreciated that he found another way monitor.

Again, I am in no way advocating leaving your GF. I just want something so that I can sit right next to it and not stand over it.

It is the actual standing over the glowforge that I can’t do. So if I could stream to my laptop next to it at least I could sit down and work at the same time. I could be at the GF in less then a second.

I think streaming to a computer when you’re literally an arm’s length from the GF is un-needed. I mean you can just take a quick glance every so often to check your blind spot for signs of fire - more light or smoke than usual - and keep an ear out for unusual sounds. It doesnt need to be overcomplicated.

Angle a mirror above the GF for arm chair viewing.

streaming to a computer when you’re literally an arm’s length from the GF is un-needed. I mean you can just take a quick glance every so often to check your blind spot

My GF is above my head when I’m sitting next to it - the pass thru slot is about eye level. Even though I’m sitting in front of it (lined up with the right side of the GF) I can’t see inside.

Mine is right where I can spin the chair around away from the computer, and conveniently rest my chin on the lid and stare at the beam without getting out of the chair.

Too bad you can’t use a smoke detector. It’d have to be done with IR. If there was no IR cut filter on the lid camera, you could maybe use that to detect a large hot spot indicative of a fire. Having something that stopped the run, rang an alarm, maybe even shut off the fans would be really nice feature.

But I fly electric radio control airplanes and helis and multirotors. Some with very large batteries. When fully charged, they have the energy equivalent of about 1/2 a stick of Dynamite. And I usually charge a few at the same time (80A charge rates). These batteries have been known to explode when being charged, or when in the fully-charged state. I’ve developed a sort of “Zen” mindset when I charge these batteries because I never leave them unattended. They could burn down my house.

I apply that mental training to my GF. And at least with the GF you can actually see something happening. There’s bright lights from the pew-pew and the tube flickers and there’s smoke and noise. Compared to watching Lithium Polymer batteries charge, it’s downright exciting as hell and worth the price of admission.

My view, never leave a running laser cutter unattended. It’s designed to set things on fire (and then blow them out with the Air Assist. But the AA only gets one side). I keep a re-purposed pump spray cleaner bottle filled with water next to my machine. Something starts to flame, open the lid and a few squirts puts it out. No harm to the machine from the water because it’s delivered in a very localized stream. So far I’ve only managed to set cardboard on fire, though, no plastic or wood fires.

I actually sit in the same room with my GF and have an iPod Touch facing down on the GF and project it to Quicktime on my 27" iMac. That way I can sit on the couch and look at the screen which is in the same room as the GF rather than having to hover over the GF looking down.

I got a 20 foot USB 3 cable and ran it from my iPod Touch to the iMac 27". It works great in Quicktime because one can choose a camera from Quicktime to use as a camera and record or either just project the camera from the other device.

I haven’t had a problem, and it allows those who are not able to hover or stand up all the time while the GF is processing.

I think streaming to a computer when you’re literally an arm’s length from the GF is un-needed. I mean you can just take a quick glance every so often to check your blind spot for signs of fire - more light or smoke than usual - and keep an ear out for unusual sounds. It doesnt need to be overcomplicated.

While this may not be needed for you, my Glowforge is across the room from my computer in the office. This works for me so I don’t need to stand over the machine, but I can still monitor it while in the same room or if I run to the kitchen to get something to drink while its cutting.

I was responding directly to Pearl.

I’m building a small c02 remotely triggered fire suppression system to install directly into the GF. I have a mirror above the machine and my work desk is situated 10 feet away with a direct line of site to the machine. If a fire initiates, I can push a button and discharge the c02 cartridge, which deletes the available oxygen, thereby smothering the flame, all the while, I’m getting my fat behind over to the GF to be hands on asap.

I’ve been doing the same since I received my machine. I recently upgraded to a 4K Unifi security camera just to be safe. The second thing I did after setting up my Glowforge was to build a simple wifi-enabled button-pusher that can trigger it without human presence. That being said I also run my machine remotely in a nearby co-lo that has a halon fire suppression system just to be safe.

I keep a damp rag nearby.

I keep a damp rag nearby.

Lol, I do, too, but my old butt is getting slow…