I’ve had this happen several times, but only just now thought to take a screenshot. I’ll have a file all set up, and when it cuts suddenly the cut lines for objects seem to move. I’ve lost several entire sheets of material and a ton of time due to this. Has this happened to anyone else? I’ll post a screenshot of the finished, completely unusable print. This time the score lines all went where they were supposed to, but clearly the cuts are not lined up, and worse, they’ve moved around with eachother too, meaning that literally not one piece is usable even if I decided to build it inside out to keep the score marks inside.

This is incredibly frustrating, since I’ve wasted so much time and material to have this error keep happening randomly without warning. 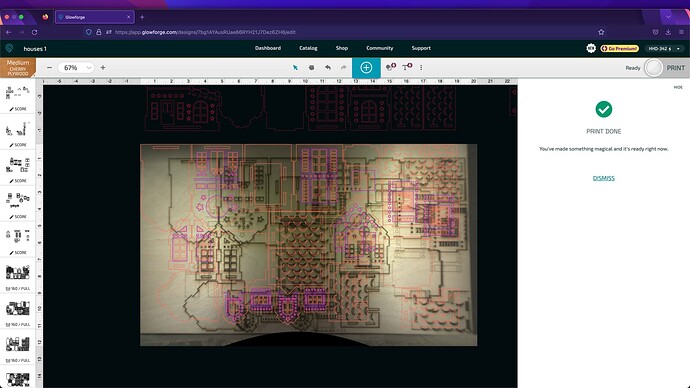 You have to “set focus” before you place the image.

the cuts are not lined up, and worse, they’ve moved around with eachother too,

When this happens during the print, it means that a belt has slipped either because it is too loose or if the head has hit something. Sometimes it slips only in extreme deceleration when it is changing direction only once in a print or even not every print, or if more loose more often.

Thank you; any ideas on how to prevent this?

Hi dan84, I’m not moving the print head at all by hand, it’ll happen often in the middle of a print. The first time it happened it cut about 50% of it in the right place, and then all the rest of it right on top of the area it had just cut rather than below it. It’s been happening more recently, the first time was in October.

on how to prevent this?

Do not move the head unless the machine is off. While off look underneath where the exhaust could hit, and make sure it doesn’t. If it still slips due to acceleration tighten the belt and/or cut the speed and power a bit so the acceleration/deceleration is not so extreme.

The lowest point is the exhaust pictured at the back of the carriage. 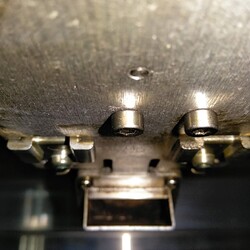