I can't believe I even have to ask

How do I get to the design page. The page that shows what the camera shows. I did it with the first test print but it was after setting up my GF.
From now on, how do I get there. I just put in a piece of PG draft board with stars drawn and a screen didn’t pop up or anything.

app.glowforge.com is where you upload designs IF you have gone through the initial setup once.

The Trace Button will start the process (once you are in app.glowforge.com )

Once you have logged in to app.glowforge.com, you can use the Trace button in the upper left corner of the Dashboard to trace your stars into a new worksheet.

Have to admit that even though I have had a machine for more than a year, have never used the Trace feature. (Other than to test if it worked.)

It’s kind of like having a 64 function Swiss Army knife just for the tweezers.

have never used the Trace feature

I can’t claim that, but I have only used it once to match a paper tracing for hole layouts and shape of a piece I just didn’t want to get all the measurements, slap it into Inkscape and export out the SVG.

Always seem to want slight adjustments so I tend to use my flatbed scanner or macro camera through Photoshop to the GF.

If ever want a quick and dirty copy then the Trace would be fewer steps. But so experienced with my normal process that it’s lightning fast.

It was for one time stars, so I thought it’d be faster to draw on and cut. Seeing as how i’m still trying to figure it out, I was wrong lol.
I’ll just make some stars in GIMP
Thanks, though.

Just me, but Inkscape might be better for drawing shapes and vectors. GIMP will work but is more of a painting and editing package. Though haven’t used GIMP a lot.

I use GIMP a lot so I can use it for this but I will be downloading Inkscape for GF purposes, if I see the need.

That’s cool. As long as you understand that the output from GIMP is essentially an image. Lines have thickness. If you want to engrave you are good. If you need to cut then somewhere the drawing of a line needs to be converted to a vector with zero thickness.

Then I don’t understand hahaha. I’m going to download Inkscape right now. Once, my star outline is created. What would I have to do?

On my phone. Someone else will need to point you to one of the many tutorials here.

Well, you at least pointed me in the right direction. I’ll see if I can find it in search. Thanks!

FYI: There is a “stars” creation tool in Inkscape. Allows you to change the number of spokes, roundness of the spoke, spoke ratio, etc. Or you can just draw from scratch. 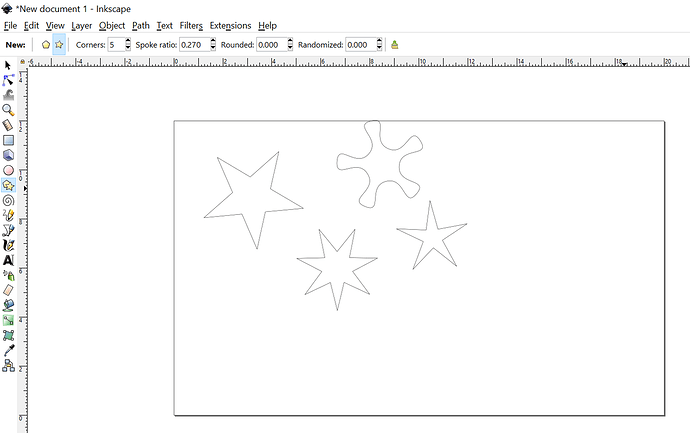 So glad you told me about inkscape. I created and cut my stars out within minutes after d/l and installing Inkspace. Thanks again!!