The glowforge app works well on my iPad Pro with the exception of the upload portion. It will not upload anything at all and the button to upload does nothing. Any suggestions?

Do you go to the app on a browser, or is there an actual app for iPad? Maybe try a different browser if its the former?

No actual app but i will try a different browser now. Thank you… good idea

They are working on an app but it’s not been released yet; no idea how far along they are.

I don’t think you can upload on iOS. iOS was built on a segregated architecture… For the longest time, you couldn’t open a document from one app in another app. That is changing, but I don’t thing iOS is at the point where uploading from Safari is possible.

The upload functionality is probably the main reason behind the (future) app.

Safari on iOS has supported Safari file upload for images since iOS 6, and for all file types in iOS 11, using the standard HTML form field (e.g. I can upload files to this forum using my phone). It looks like the GFUI has custom code to do this, rather than using the standard web form field for file uploads, and they appear to be ignoring clicks on the button on my iPhone and iPad, but it works on my desktop. So my guess is that they could get file upload working on iPad and iPhone, but it’s probably not their top priority.

Note that you can launch GFUI, position things, and print them from iPhone and iPad. You just can’t upload new files. I’ve used this occasionally to re-print things I’d already set up. If you use Proofgrade material. It’s not fun entering all the settings into an iPhone.

You can upload from cloud storage or your photo library, but the app you created the file with has to save it somewhere accessible. A glowforge app may be setup as a sharing destination. 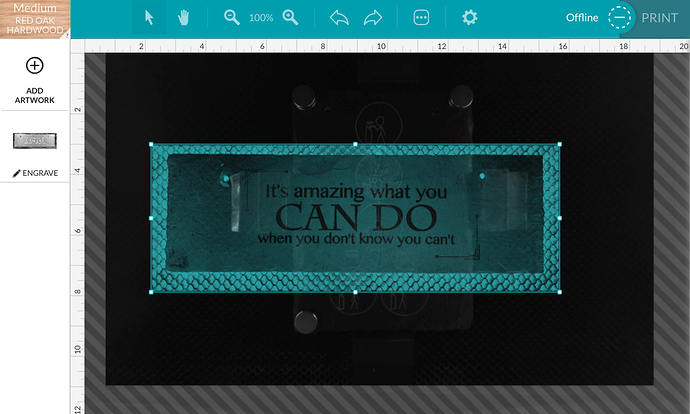 Edited: Realized I had uploaded png, not the svg, so here’s a screenshot of an SVG added to a blank project on my iPhone 6S… 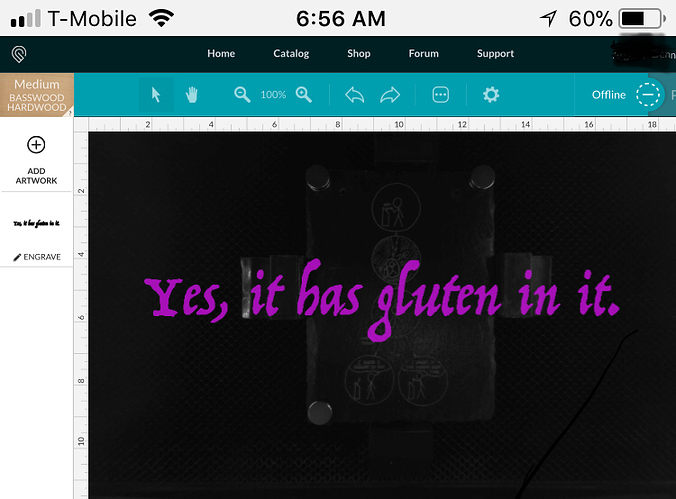 Very cool! What version of iOS are you running?

Odd, I can’t get it to work in 11.2.5, in either Safari or Chrome, using either the ‘upload’ button or the ‘add artwork’ button. Just lucky, I guess.

I must have done something right in a prior life, as I seem to be able to do the impossible on a fairly regular basis. ¯\(ツ)/¯

Here’s another example from last April: Pre-release - Leather Adventures – I seem to be the only person that can export SVGs directly from Adobe Capture to Dropbox using a free Adobe account instead of a paid CC subscription.

My mantra has since become:

I’m sorry to hear you’ve hit a snag. Support for tablet and mobile devices is still in development and I’ve passed your feedback on to the team. At this time we recommend using a web browser on a desktop or laptop computer if you’re encountering difficulties from a mobile device.

If there’s anything else we can help with, you can open a new thread or email us at support@glowforge.com