Icons on Your Home Page

Is there any way to have clearer thumbnails on the home page? I use to create colored pictures that represented the final product, delete the content in the printing page, then upload the actual items to cut out. That made it so much easier to find what I was looking for when on the home page.

Seems like the update doesn’t allow me to do this anymore since the thumbnail changes when you upload new files in the printing page.

Does any one know of a better way to design the home page with better identifying thumbnails?

Left is after the update and right is how I use to set up my thumbnails before the update.

Unfortunately, this seems to be a weak spot right now along with no subfolders. I get quite verbose in my file names to help myself. I also save projects elsewhere incase the server loses it. I find this quite helpful as having to original source files let me do new projects based on old projects.

yea, but even with “find” bars and great labels, nothing beats the colored thumbnails. Plus it looked so nice with it haha. Wish it would at least go back to the normal way so i could make my own thumbnails.

quite verbose in my file names

With literally hundreds of “snowflakes” I have had to fall back on the computer names that are a string of random numbers. That works ok when I can see the image but not so much with only the name to distinguish it. Only a few get to some finished look but what works or not cannot be known ahead if time. 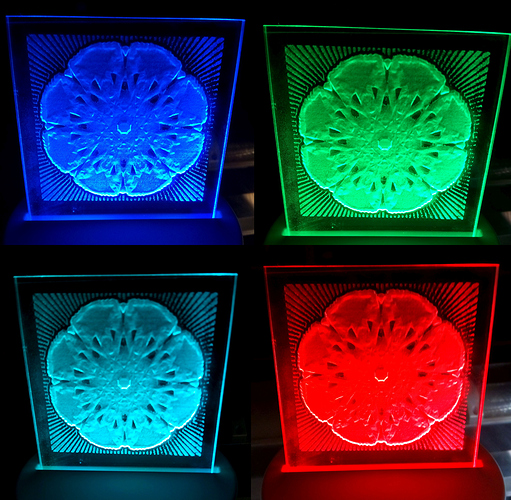 The change was what GF determined most users wanted. If you don’t agree, you need to email or post in Problems and Support to pass along your feedback.

There is no way to change the behavior, you’re stuck with what they decide.

I have to agree. Once I understood the first file uploaded showed the thumbnail I took advantage of it. I understand that updating to what it looks like makes some sense, but for larger projects and things off the board, it’s just indistinguishable. I’ll think I’ll send in feedback about that too.

Once I understood the first file uploaded showed the thumbnail I took advantage of it.

Perhaps if more folks understood it, it would have been better for everyone. It was a cool trick, Would be cool if we had a photo if the finished product after it was put together as they do with the catalog items.

The trick I did figure out was that no matter if there was engrave to have a bright fill added. Where there is not it is hard to see what the piece is but with fill, it is easy. Also temporarily setting the cut out part to fill makes it easy to get parts very close without overlapping, the once they are placed going back to cut.

Wow. That’s just 'WAY too organized to be acceptable.

I’m the opposite; I’ve always wished the thumbnails would show how my project actually ended up vs. how I first uploaded it, so I’m quite happy with how things are now. Or I WAS, anyway, until you went and ruined my day with this ridiculously awesome former workaround that I never thought of!

I don’t use the fancy method, but I liked the original way. I often shift things around on the board because I need an extra piece of this or that or to fit on a piece of scrap. I’d like the image to stay whatever my original was.

Perhaps the best option would be to autosave the original and then let us upload/assign whatever we want.

I’d like the image to stay whatever my original was.

You can always do an undo back to the original state, Thinking maybe that would work as a workaround… before leaving bring in that photo and leave showing that?

I don’t necessarily want to undo. There are almost always workarounds, but it’s frustrating to have something that has been working for you broken as a “feature.”

Whoa, I think I understand what you’re saying. I’m going to give this a shot. Thanks for the idea!