IDEA based on a problem... QR codes and getting around them-

How about you let us buy a sample card set of all the QR codes for proofgrade. That way we could lay them in the bed on the material but not have it ATTACHED to the material.
It provides a bunch of problems… uses up a bunch of space if you don’t cut over it, and effects the engrave if you leave it in place…
At this point I plan to carefully remove it and try to stick it on an index card or something so I can put it in the bed with the material and still cut the part it was covering.

I did that initially but went to just picking the material from the list. The plan is to eventually have the codes printed all over the mask in UV so they won’t need the stickers.
If the sticker covers an area that will be engraved, I would definately remove it, but for cuts it hasn’t given me any trouble. 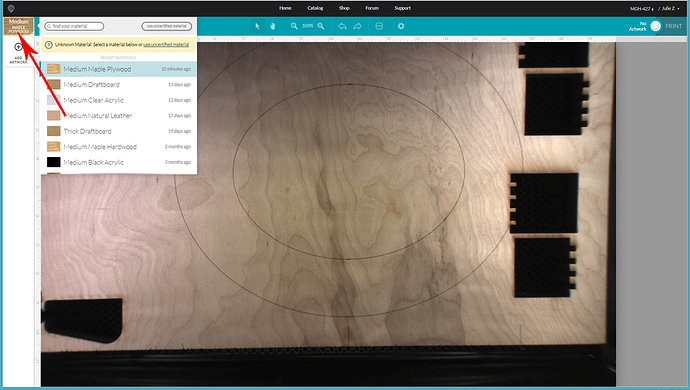 You don’t need the QR code at all but if you feel the need to use them, you can print your own copies on paper and use as needed.

Love it. They could also just issue a pdf with all of them… we can print them out. I mean we can photo and print but a nice pdf would be slick.

Great idea and would work except for one thing: each batch of PG had a unique identifier in the qr code, not the settings per se.

Sheer speculation but assuming three related database tables: one with qr codes issued, another with the proper settings and a lookup table between them. Once the lookup table is edited in any way, your library of chips are instantly obsolete.

Well if we’re talking ideas: let us generate qr codes for abritrary settings. In fact make it passive (relates back to a previous idea I posted) where we can view our raw job log and each task would have a button that says “print qr code”.

Clicking it would ask for “build notes” and if not pg, a “name”. A checkbox to ask if you want the bed photo attached. Submitting would make a PDF qr code with a label to denote what it does and what it’s called, like:

This would allow us to have hardcopy and softcopy build logs with a nice qr code if we want to reproduce the action, with he added benefit of being able to go back and pull it from the history of you were moving too quickly to document everything (like say during a holiday season).

It gets tricky to keep the ui simple when you have more complicated jobs with multiple actions but I don’t think it would be too hard to pull off [speaking as a seasoned professional web software developer].

Pitfalls probably abound where GF is intentionally keeping us in the dark, like exactly how often they change the power levels, or the differences between pro and basic, but it seems doable, at least on the surface.

I would love to be able to save my own settings, with a name and a photo, and pick 'em like they were Proofgrade options.

Thanks for the feedback and suggestions! I’ve captured them all and shared them with the rest of the team.