So as a follow on to making airplane coasters for my son, I did some ikea trivets (super cheap come in a 3-pack). They were super quick to make as a gift with pre-saved cork settings from the coasters and auto-focus these are perfect for last minute or holiday gifts. 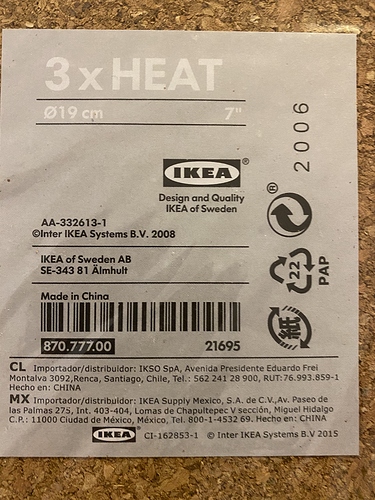 image3024×4032 3.85 MB
(Very disappointed they don’t have some cool Swedish name like the Snörg or something)

Anyway, since he likes to cook these seemed like a good present these are the planes he’s currently flying or will be (I was going to make a bombardier one since he will train on the CRJ-200 which I think bombardier bought) but honestly how many trivets does a 20 year old need… 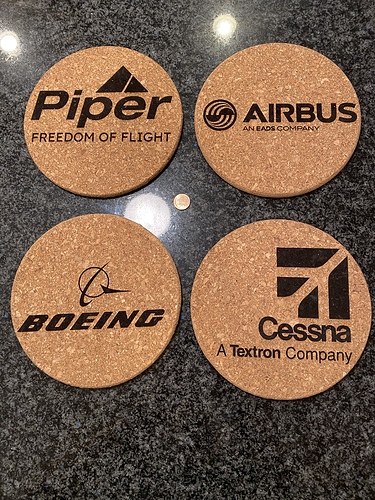 Oh I will add that the piper logo I had didn’t have the text at the bottom that their newest logo has, so added that in the premium part of the GFUI. It’s a rare occasion I wouldn’t do my mods in illustrator but that laptop was upstairs and I was at the GF with my chromebox next to it.

What’s interesting is unlike many companies these logos (except the piper one) were all
Available on the company websites for downloading in their press resources section as EPS or SVG files. Although the airbus logo was a bag of hurt with clipping paths which were resistant to Removal. Which was strange as when I finally got rid of the clipping path the logo was unchanged that I could see, but there is probably some crazy French regulation that all logos shall have clipping paths or something.

some crazy French regulation that all logos shall have clipping paths or something.

For printing in Ink I think the clipping paths work. And I suspect they were not thinking “will this work on a Glowforge” when they did it,

will this work on a Glowforge

For printing in Ink I think the clipping paths work. And I suspect they were not thinking “will this work on a Glowforge” when they did it,

Perhaps, like me, they think Glowforge should have more complete SVG support.

(Clipping paths are high up on my wishlist, along with properly supporting both fill rules. Both would make a lot of design work easier.)

Google Translate seems to think that “heat” is an acceptable Swedish word. (Meaning “heat”, surprise surprise.) Not one of the more common Swedish words but perhaps IKEA had already used VÄRME, HETTA, GASS, GLÖD, and VÄRMEBÖLJA for other products.

Clipping paths are high up on my wishlist

Agree. It’s a pretty common CAM type thing, to have a boundary which the clipping path essentially serves as. V-carve that I use on my x-carve has that feature where a vector can serve as a clipping path for tool-paths

Hi! What settings did you use for the Trivets?!

If you followed the post-chain, I got my settings from this post: Cork redeux