So I wanted to experiment making a box for the first time so I headed over to the lazy box making page here: http://boxdesigner.connectionlab.org and just put in the parameters of a 4" box. I used some Black cardboard I saved from a frozen steak (I know, sacrilege) box. Plastered on some Star Wars icons to impress my geek friends and threw it in the

. I kept the engrave at like 20% power hoping for the black to be vaporized from existence and boy did it! I think it looks B-E-A-Utiful. I need to find a source for more black cardboard like this! 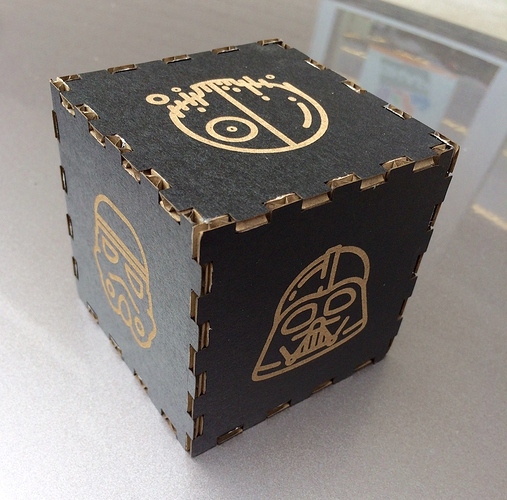 killer. while getting it pre-tinted would be easier i bet you could color normal stuff, too.

Myself and others have done the same thing with black card stock…it leaves that beautiful tan/gold image, too. Boxes are on my to-do list…nice job!

Cool! I have a bunch of white-on-one-side cardboard, and same thing. When I first started playing with it I was messing with the power wondering why it didn’t etch any darker, and then realized that I was just taking off the pigment (and the next step is burn). I wonder if you could take the ink off some boxes that way.

So the box was printed with black and the laser etched away the print? That looks incredible.

basically. the cardboard has a black surface, and it’s been ablated away by the laser so you see the normal cardboard instead.

i agree, the effect is striking eh.

So the box was printed with black and the laser etched away the print? That looks incredible.

said up there. I’m gonna have fun with this effect.

I like how it is exactly opposite of how lasered materials typically come out, with the black faces and the edges raw. Looks really cool!