In need of some opinions

This is my next laser project. I masked several of Baltic birch sheets before hand so I didn’t notice the difference in color until after I peeled off the masking. In some ways I like the two tone look, but on the other hand I’m not sure. Just wondering if it would be better to recut the darker ones to better match the others or just leave it. It’s not a lot of work, just more time and a waste of material. I know ultimately it’s my creation, but I’m just wondering what others think. 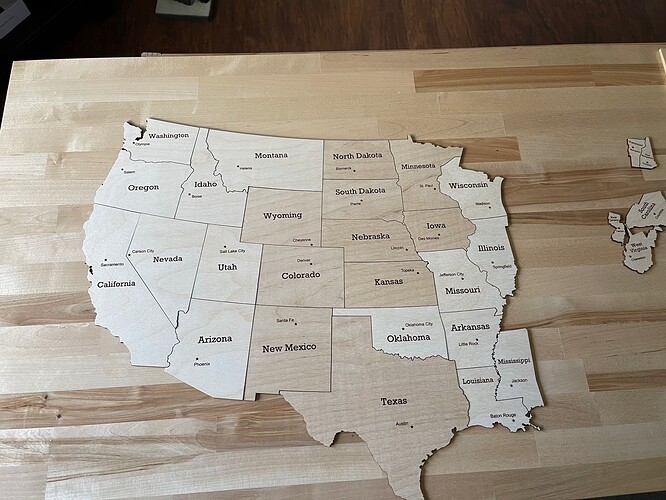 Very clean looking, I really like it a lot. Its surprising that the colors were different, but it doesn’t detract from the map.

It was surprising! I didn’t even notice it when I was masking them. I wish I had cut the states more randomly instead of cutting the ones from the west coast to the east. It would look better if the different colors were more spread out. I am going to add stain to them, so I suppose I should wait and see what they look like after.

consider a light stain on all of them . might make the match better. you can test this idea on scraps of each.

Also, here are some more opinions:

Pineapple does not belong on pizza

The early bird can have the worm.

Agreed on the pizza and pineapples thing!

It’d be super cool to have that tone difference follow timezone lines but we’re past that.

I like the project though, the scale, the clean design, even the typeface choice. Nice.

That being said, I would probably recut the one that is the “wrong” color. Baltic isn’t too expensive, and this will bug you forever, even if you try to salvage it with stain. (which may or may not work).

If it were my map I would look at it every time and see the color problem.

I think you’re right. It won’t be too difficult to cut them again. And I think it will be worth it. I’ll just have to take a closer look at the wood before I mask it to make sure it’s closer in color. I wish I had more of the darker ones because I like those better actually.

Wood is definitely analog. Sometimes it’s a front/back thing too, I’ve had some BB where one side was noticeably darker than the other.

The grain on the dark one is really pretty, it’s a shame you already cut it up, it’d be good for a project where the wood grain could be front and center.

Another theory: if you have enough dark stuff to make the rest of the map you can make two and give one away

Then your problem will be choosing which one to keep, light or dark?

I just went through all of my Baltic birch. I have just a couple more 12x12 pieces, but it won’t be enough to recut the lighter ones and the rest of the states. I’ll just have to make them all the lighter color and then stain them. I play around with that more tomorrow. I’ve been staring at the thing all day it feels. Sometimes you have to just call it quits for the day and come back tomorrow with a fresh mind and eyes.

I really like the differences, and would find a homogeneous map a bit boring. My vote would be for you to stain them randomly, some darker, some lighter.

That’s an interesting option I didn’t consider. Something to think about. Thank you!

I think it looks absolutely incredible!!

My first thought was “what demographics are indicated?”
I agree with @PhxFrge, that would remove the stark difference.

Yeah. I was thinking the same. People would look at that and think there is a reason some of the states are different colors, especially all grouped together like that. I do really like the idea of about three different shades of stain. Not necessarily different colors though. I recut some of the states after going through my wood pieces more carefully. I was able to find about four pieces that were a little darker. I think this will look better. 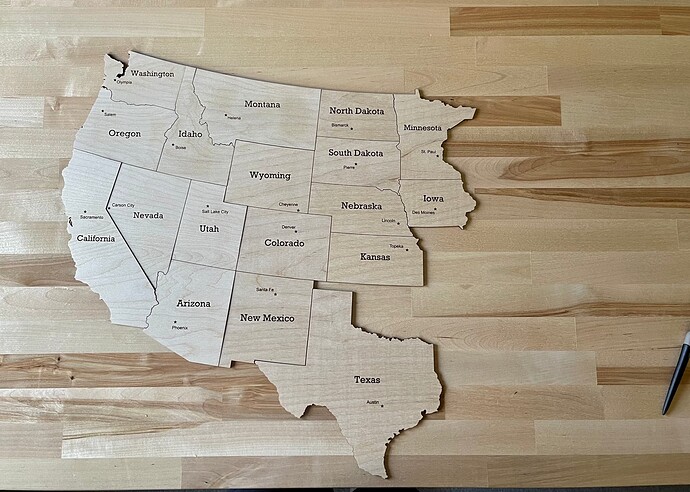 The early bird can have the worm.

I hate that statement. I’m a late riser in the morning. Whenever someone fires that quip off at me, I reply with - The early bird may get the worm, but it’s always the second mouse that gets the cheese.

The early bird may get the worm, but

…it just proves the worm should have stayed in bed.

The early worm gets eaten by the bird.