Not to jinx anything, but other than a recent death in the family everything’s been pretty positive the last few months, in case anyone wondered where I’d been.

For the Christmas season I designed a tree topper and put a strand of lights inside that casts light splendidly in a dim room. My office is actually very well lit, so the effect may seem diminished. Anyways, here ya go! 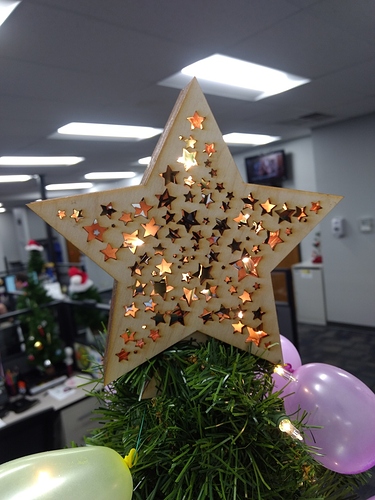 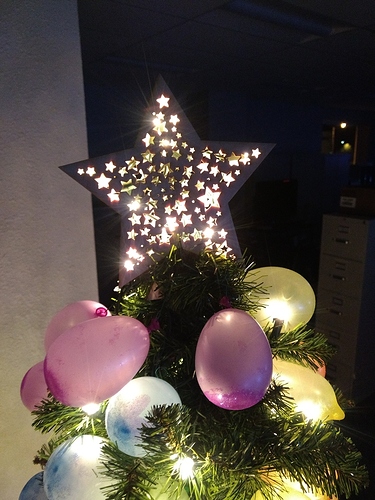 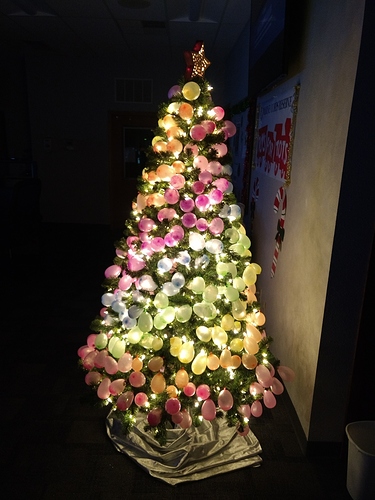 Oh hey that’s nice work! Can you talk a bit about how you designed it?

Great to see you back and the tree topper (and tree) are extremely cool!

Inkscape, polygon tool… A bit of random clicking, and then layers of perimeter and lots of gorilla wood glue.

Did you cut the layers in star shape or did you cut “sides” and stack them up?

You’d probably save material by doing sides, but it’d be a lot easier if you cut star layers I bet.

I wouldn’t be able to get a star point if I just cut sides with laser alone, would need like a grinder or beltsander to get the edges flush that way. I did layers because I didn’t want light escaping from the sides.

There are ways around that, maybe for next time? Attaching an SVG of how it could be done.

And since the forum seems to hate my svgs, here it is in PNG:

Yeah circles (rings) are irksome because they don’t nest well. You get better and better preservation of material the more you break your circle up, but it is more of a pain to reassemble. There’s definitely a breakpoint where you’re chasing diminishing returns in terms of effort.

Nice concept. But yeah, I was lazy and/or too tired to go that route. It was a last minute thing drawn out in 4 minutes at midnight the night before it was needed.

The SVG is there, just not viewable. Discourse does strange things to them. I opened it up and it was gigantic scale.

yeah, so i took my design and put in a few breaks, and when it came time to assemble it was more of a pita than i could handle. the walls were hard to get in proper uniform design, they’d want to slip out of position far too frequently, and i never intended the walls to be as thick as you designed them, it adds a lot of weight, and i found that even printing yours causes even more slippage when gluing solid. so i wen back to layering and got 3 more out the door last night to family and coworkers.

There’s that breakpoint I referred to, sometimes it’s not worth the extra effort to save the materials.

The design I posted was kind of representative, not exactly a true-to-scale design candidate… in reality making the pieces actually snap together and/or have an indexing hole for a dowel would be a better option so that they couldn’t move during glue up… but all of that’s probably a lot of effort unless you’re making lots and lots of them and material cost becomes a priority.