So.
I’m getting rather ok at using inkscape (two belts up from fucia is my inkscape-fu!) but I’m trying to do a template for a cover for a notebook.

The dimensions and everything are spot on in Inkscape, but it’s printing 10mm or so larger in both x and y dimensions.

I’ve set the stroke to 1pt so it’s just a hairline, and printing on cardboard or heavy craft paper (with proper material thickness in there!), it’s still off.3 test prints and they’re all exactly the same - so it’s not a random thing (reloaded into the GFUI on 2 different machines even!).

It’s got to be something inkscape-y…

Anyone? @jules? you’re a black belt in Inkscape-fu!

Chuckle! Not me…you probably want to check with @evansd2.

(Also make sure you are running the current version of Inkscape v0.92).

If you go to File -> Document Properties, is the Custom Size set to a width of 20 inches by 12 inches? You should also go to Edit -> Preferences and the very first selection Tools, set it to Geometric bounding box. The stroke width is not relevant if you use Geometric bounding box. That said, if it was the stroke width you would have to be using a 20mm width to get 10mm off.

Are you running Inkscape on either Windows or Linux?

Its possible that you’re using an old version of inkscape that is still using the 90dpi standard. Like Jules said, are you on version 0.92+? If so you should be ok there. 0.92.3 is the most recent but .92 was the switch to 96 dpi I believe.

inkscape 9.2.3
I’ll look at that bounding box thing. that’s about all i had not checked.

Also make sure you save as standard SVG. This is helpful.

save types are inkscape SVG or Plain SVG…
and what does that bounding box setting really do? 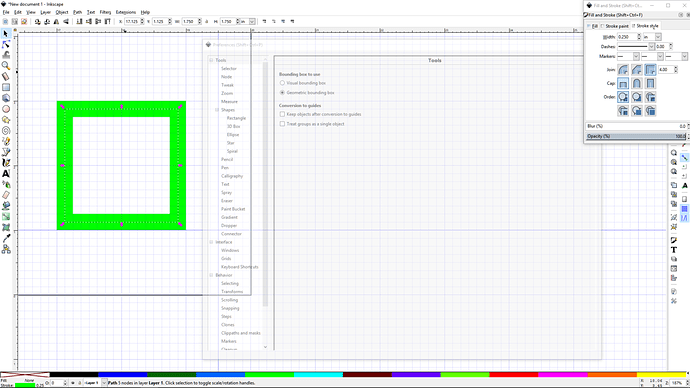 If it is visual bounding box, it includes the stroke width. Note that in this case the square is measured as 2"x 2" 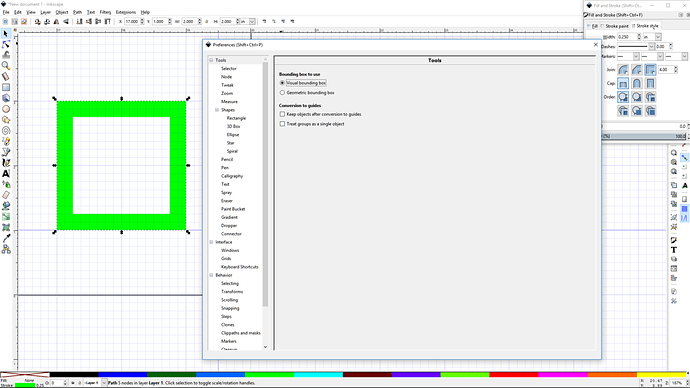 If you want to zip up the file and upload it here maybe someone can try to load it and see if they can spot anything.

Strange. Is something else off in the Document Properties? 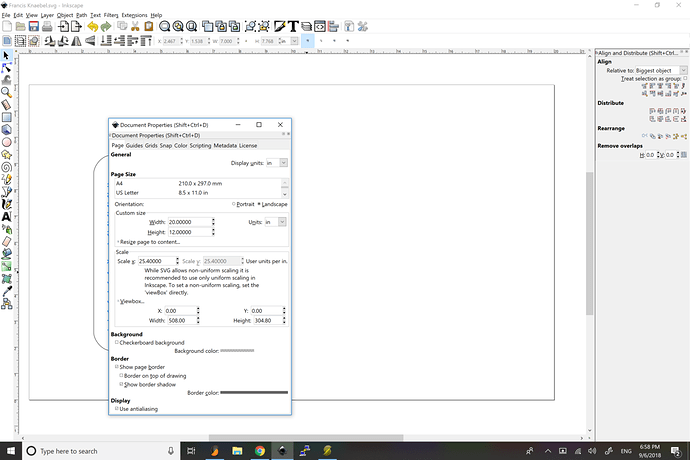 yeah sure. Here is the file.field-notebook-resized-v2.zip (14.9 KB) 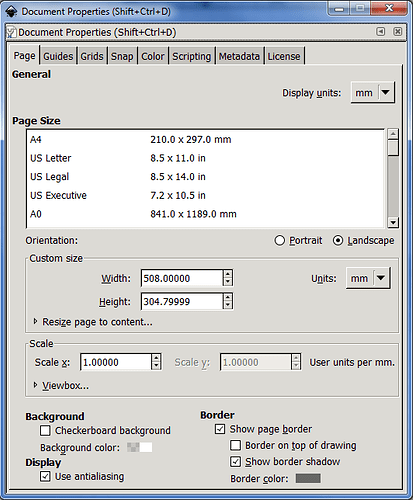 Comes in fine. I have an hour long job printing so I’ll check it in the interface when it’s done, unless someone else has figured it out.

Did we establish yet what computing platform you are using for Inkscape? What browser are you using?

I looked at it and got significant resizing problems. I believe you might need to start a ticket in Problems and Support so that they can take a look at it. We saw something similar with the early Snapmarks testing, and they came up with a work around, so it might be something they can fix easily…but they need to know it’s happening.

Be sure to tell them which version of Inkscape you are using specifically.

Here’s what I see…when I open the file in Illustrator I get exactly a 33.333% size increase…which is the difference between an image at 96 PPI and 72 PPI, which is how Illustrator opens files that haven’t been defined. (I think.)

But what you are seeing I think, given measuring variance, is a factor of 1.0667, which is the variance between 96 PPI and 90 PPI.

So something isn’t sticking or being interpreted correctly somewhere, and they might need to know so they can make an adjustment for it.

In the meantime, if you’re in a hurry and want to cut it accurately now, you can try scaling it down. Reduce it to 93.75% of the current size before saving the file.

But what you are seeing I think, given measuring variance, is a factor of 1.0667, which is the variance between 96 PPI and 90 PPI.

So something isn’t sticking or being interpreted correctly somewhere, and they might need to know so they can make an adjustment for it.

In INkscape, in Preferences>Bitmaps: make sure all the resolution settings read 96 and not 90.

(Cancel that shoutout to Support if that fixes it.)

Looks to me like you’re designing at 90dpi. Glowforge sizes stuff at 96dpi. 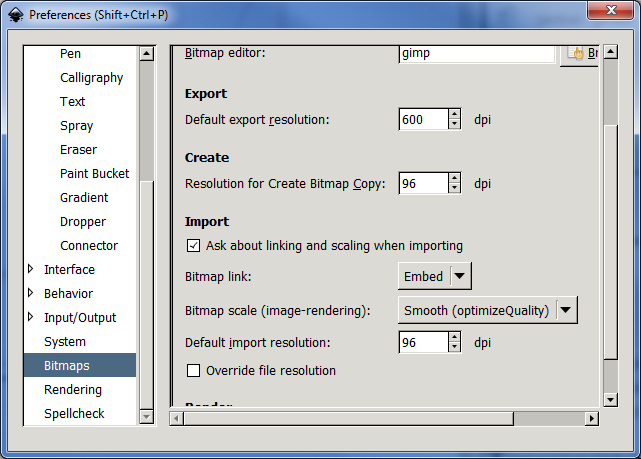 Those are my setting, @mpipes. I’m not exporting, fyi - just saving.