I’m not International for Glowforge so don’t really have a dog in this argument. Still, unless I’m missing something in the discussion, Glowforge is sending $150 in Proofgrade and listing it as $73.23 worth of materials for International purposes? Maybe wholesale value? I confirmed that the Proofgrade shipped to me would have cost $150 in the U.S. Sounds not too shabby to me.

Import VAT isn’t something I would want to pay but it’s what countries do. We don’t here.

The point is it is free so we shouldn’t have pay VAT on it. Since there is no such thing as free it is really included in the price we paid for the GF and its shipping , so in total we should only pay VAT on that sum. However for that to happen GF have to fill in the invoices correctly.

For example if the PG was in the same box as the GF and the invoice stated what was paid then the correct VAT would be charged. If it is sent in two shipments we should not have to pay any more.

A matter of interpretation. I’m sure your Government would disagree. If I win a $25000 automobile in the U.S. on a game show I still have to pay the full income tax for that free award. If my neighbor gives me $10,000 I am legally required to list it as $10,000 of income. Not that I would. Just that it’s the law for my location. What you want is for GF to declare the product as zero value. Which it is not.

A matter of interpretation. I’m sure your Government would disagree. If I win a $25000 automobile in the U.S. on a game show I still have to pay the full income tax for that free award. If my neighbor gives me $10,000 I am legally required to list it as $10,000 of income. Not that I would. Just that it’s the law for my location. What you want is for GF to declare the product as zero value. Which it is not.

GF are not giving out free materials. We have paid a fixed sum and GF have sent some goods. We don’t get taxed on the perceived value of the goods, we get taxed on the actual value it cost. The invoices should add up to what we paid, not a higher sum. That would be false accounting.

I’ll step out. I personally believe that what you are asking would be false accounting. “Value” added tax. But I don’t live there and have a different sense of my values than you. So enjoy the discussion.

This is why lawyers charge by the hour. I see the point of both sides.

I personally believe that what you are asking would be false accounting.

GF’s sales invoices should add up to what we paid them. The invoices they give to customs should match that value. Nobody paid an extra $73.23 to GF so they should not invoice us for it. If they produce an invoice to say we paid $73.23 that is false unless they subtract from the price of the GF on its invoice. Then it would be correct.

Yes they would be free gifts and taxable if GF sent them out of the blue. But they have only sent them because we paid them for the GF, so it is effectively part of that purchase. Same with the crumb tray. That has some value and if GF send it separately they would have to attribute a value to it but they should subtract that from the GF invoice. Hopefully that will be part of the same consignment with a single invoice.

We don’t pay income tax on gifts, we pay capital gains tax but only if our total gains for the year are above a substantial threshold, £11,700. So if my neighbour gave me a GF I wouldn’t pay any tax but he would pay import VAT importing it.

I’m hoping that the note of Inco Term DAP Delivered Duty Paid means that Glowforge are picking up the tab for these shipments. I think Glowforge may be a little busy at the moment so a response may not be forth coming even though I understand it affects basically every international customer in relation to the Proofgrade shipping.

As a matter of curiosity and because I’m taking more or less another snow day tomorrow I might call UPS to ask about how they (or customs) came to the charges they did.

Also in the Glowforge shop what’s the total for all the materials that we’ve been sent when you add them to the cart?! 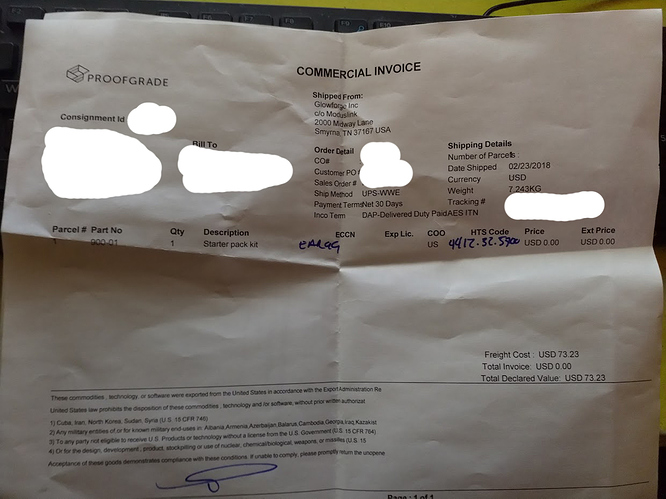 So did you pay the driver or not? If it was DDP you shouldn’t get charged. I get stuff from Mouser DDP because I buy it from Mouser’s UK web site but they ship it with UPS from the US.

Yes paid in full. Here’s how it went,…

I inform the person taking delivery that a nice person will come with a package, there may be money to pay, but whatever it is just pay it.

Driver comes, oh no, petty cash no good, people panic, try to call me but I’m on the phone, driver goes. Sad faces. No problem, call UPS, pay money, driver come back, I has package, I happy. I has long discussion thread about money and shipping, I no happy, I think about laser coming, I happy again

Wall of text, standby! Are these two terms mentioned on the supplied invoice complimentary or contradictory?

After arrival of the goods in the country of destination, the customs clearance in the importing country needs to be completed by the buyer at his own cost and risk, including all customs duties and taxes. However, as with DAT terms any delay or demurrage charges are to be borne by the seller.

Under DAP terms, all carriage expenses with any terminal expenses are paid by seller up to the agreed destination point. The necessary unloading cost at final destination has to be borne by buyer under DAP terms.

DDP – Delivered Duty Paid (named place of destination)
Seller is responsible for delivering the goods to the named place in the country of the buyer, and pays all costs in bringing the goods to the destination including import duties and taxes. The seller is not responsible for unloading. This term is often used in place of the non-Incoterm “Free In Store (FIS)”. This term places the maximum obligations on the seller and minimum obligations on the buyer. No risk or responsibility is transferred to the buyer until delivery of the goods at the named place of destination.

The most important consideration for DDP terms is that the seller is responsible for clearing the goods through customs in the buyer’s country, including both paying the duties and taxes, and obtaining the necessary authorizations and registrations from the authorities in that country. Unless the rules and regulations in the buyer’s country are very well understood, DDP terms can be a very big risk both in terms of delays and in unforeseen extra costs, and should be used with caution.

Still hoping Glowforges intention was not to place burden on customers for what is in essence a welcome thank you for waiting.

Yes DAP is orthogonal to DDP I think. If it was DDP UPS should not have charged you.

At my address the UPS driver is happy to take cash, or was, it is perhaps a year or so since I had to pay duty. I will find out tomorrow. All the other carriers don’t take cash. Some send an invoice after delivery and expect me to pay by bank transfer. Others hold it ransom and I have to pay online by credit card to get it delivered.

I used to import from all over the globe and didn’t matter what parcel service, they always demanded cash and exact cash. No cards, no nothing. And no note in advance either. I had a lot of trips to the post office to pick up my parcel so I could pay with a card. Who pays cash nowadays?! At least for the bigger services that has changed.

I have to stand with rpegg on this one. We did not buy “Glowforge + Crumb Tray +$150 PG.” Nobody knew they were going to get $150 PG when they clicked order. We bought “Glowforge + Crumb Tray” and they decided to gift us the $150 PG as a token of goodwill for messing up so catastrophically on getting devices to people when they promised they would.