Is my camera off?

I just feel like my camera is aimed slightly wrong. Just want to compare to others. 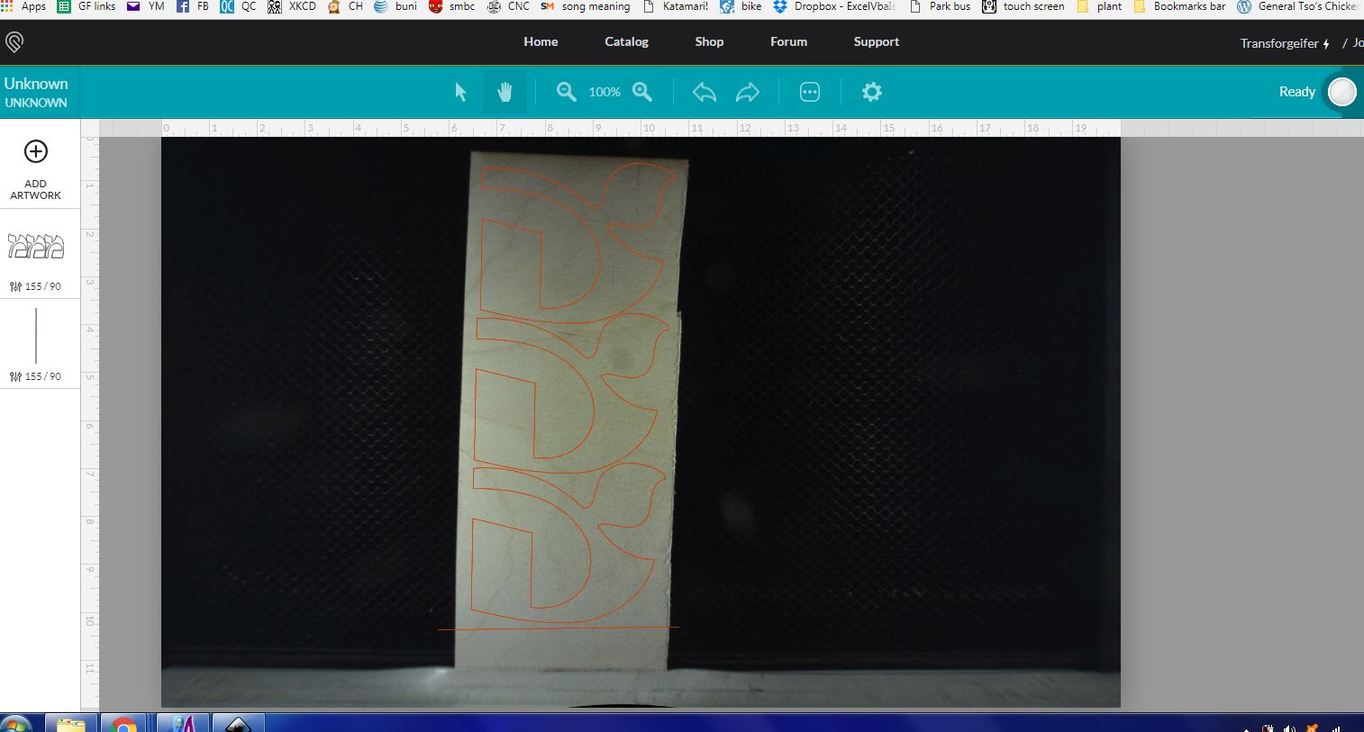 I feel like I am seeing to much of the front door and not enough of the rest of the bed. Or it is fine, and im completely wrong on this. Just want to compare to other owners.

Also, and I know this is a thing, I am getting that ballpark 1/4" shift to the right some people talk about, though it might be more around the edges of the bed then in central locations. Though it does seem to be a thing I am experiencing here and there.

Staff will eventually get with you.

The 1/4" is normal at this point. The camera tilting toward the front door could be an issue because the current 11" cut limit is off of the honeycomb in the front. Make sure that the lid is closing all of the way. The camera might tilt forward and object placement would be a problem if it does not.

But again you will have to wait for Support on this one.

That pic shows the whole bed. That grey area seems boundless. I’ve almost gotten lost out there. Mouse around, but leave bread crumbs.

Bed with material height set to .001 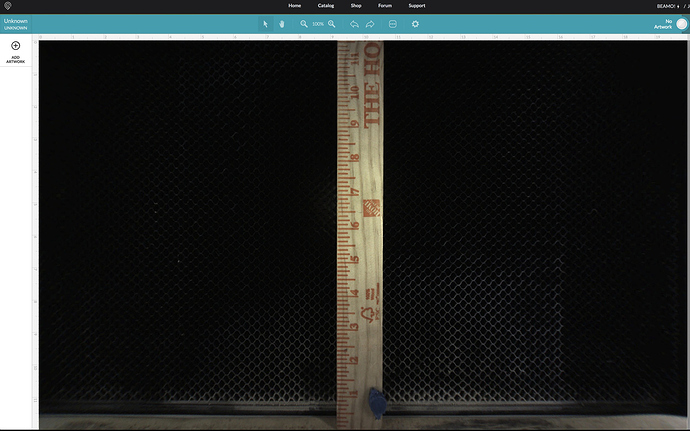 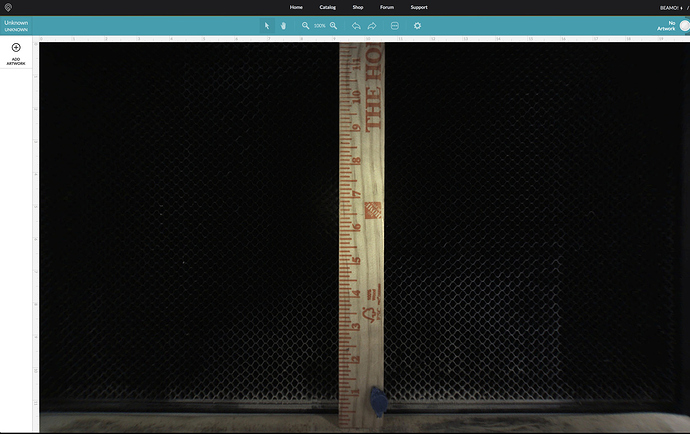 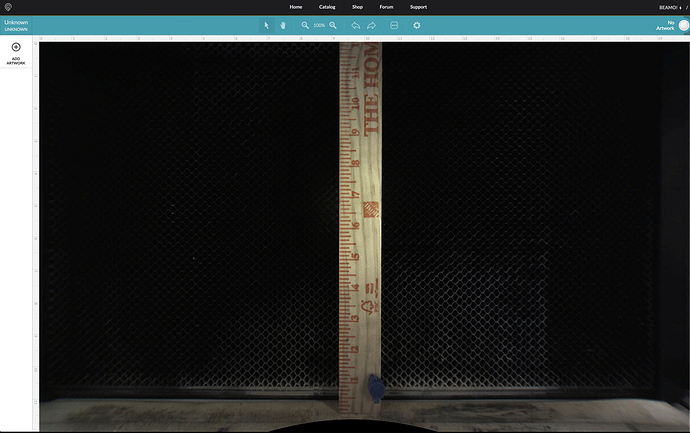 Screen Shot 2017-10-04 at 5.25.11 PM.jpg1261×792 264 KB
If that is not normal, than mine isn’t normal either… i do find it weird that I can see so much of the front door/flap. Maybe it is the abrupt cutoff on the right side that does it… I kind of want a graphic representation of a bounded limit area to help stop the slight feeling of vertigo when your eye falls off the edge of the grid
9 Likes
jordanloshinsky October 5, 2017, 2:20am #5

@jbv thanks for all pics.

And thanks for the encouraging words that something isn’t wrong

Here’s what I’m seeing, which definitely doesn’t seem right. I’ve got a support ticket open but haven’t heard back in two days since the initial “make sure your GF is sitting on a flat surface” reply (surface is flat, and dead-on level). So far it seems to work fine except the camera preview is off (or totally blurry) and a pretty frequent homing problem unless I manually move the head under the camera before turning it on.

My lid takes a bit of a “push” to close all the way, otherwise it sits up a half inch or so. I kinda feel like its trying to snap the pic prior to it being all the way shut, maybe why its blurry sometimes and pretty much always skewed as in the image. Lid is also very slightly bowed front-to-back (about 1.5mm higher in the center) no idea if thats normal/expected. 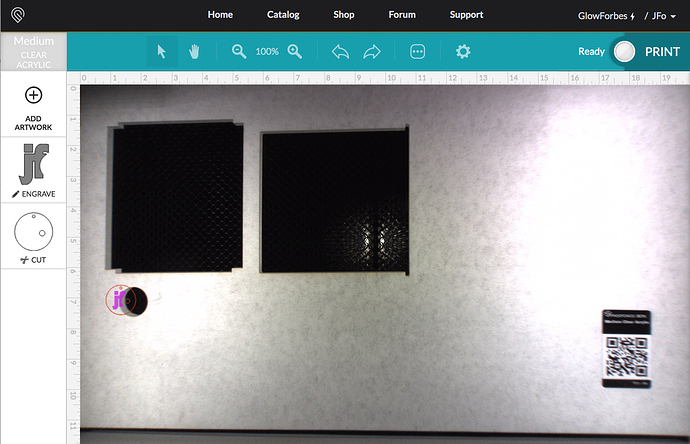 The bowing is normal and on every machine. If the unit takes a snapshot before you get the lid all the way closed you can force a re-snap of the picture in that little gear icon below the word Support.

Thanks, good to know about the bowing. The camera seems to be more of an issue, refreshing the image doesn’t seem to help the skew.

Not anything you can adjust. They are working on S/W fixes for that offset. The only H/W adjustment I can think of is maybe slightly shimming the GF bottom in strategic spots to see if that changes anything. The case itself is a little more flexible than it seems.

Your screen shot looks pretty similar to what I’ve been seeing for the last 6 months. I’m still getting great results though!

Unfortunately I’m having exactly the opposite issue, my camera can’t seem to see the entire bed. 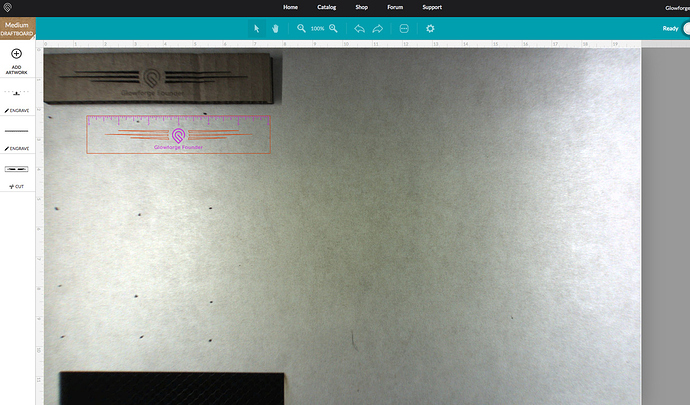 That’s a sheet of

medium draftboard on the bed and the QR code down in the lower right corner is nowhere to be found. I added a founder’s ruler (which is accurately sized) in there just to show how far off the scale is between the actual bed dimensions and what the camera can actually see. My glowforge seems to think that 6" = ~7.5". Needless to say this is making positioning my projects all but impossible.

I’ve already opened up a support ticket and am waiting to hear back with any possible solutions. Thanks to everyone for posting the screen shots of what the bed should look like, I was going crazy at first trying to figure out why nothing was cutting anywhere near where I told it to…

Guessing you are using a non supported browser like Safari or have the zoom level set in the browser (not talking about the application but the browser) to something other than 100%. I doubt seriously if it is a device problem.

Unfortunately I’m pretty sure it’s not either of those issues.

I’m having the exact same issue when testing in both Chrome and Firefox. No zoom set for either browser. Even if the browser was zoomed, it zooms the entire window (UI menus etc.) not just the bed preview (just tested to confirm).

I don’t get that impression. Also, I believe Safari, while certainly having issues, is a supported browser.

Really, if that’s a sheet of

, QR code side up, that seems to be a real problem. Not saying it’s hardware, but it’s a problem.

Semantics to me. The UI has quite a number of issues that are Safari specific, and Support continues to recommend working with other browsers until those issues are resolved. So maybe “not fully supported”, maybe “supported but doesn’t always work and other browsers do”?

Really, if that’s a sheet of

, QR code side up, that seems to be a real problem. Not saying it’s hardware, but it’s a problem.

Just for comparison, here’s an overhead shot of the bed taken w/ my phone. Everything is in exactly the same position as the screen shot I posted earlier. 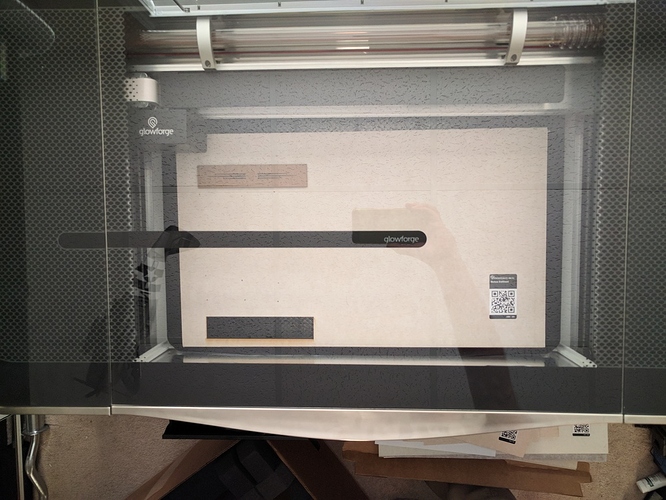 Something is definitely wrong, but I haven’t a clue what the root cause might be. Fingers crossed that it turns out to be some sort of software/config issue and not a hardware problem that’s going to require mailing my brand new glowforge back…

So, it looks like you’ve done nothing incorrectly.
I also see in your screenshot that it appears to have read the QR code regardless. Is that correct? Or did you select the material manually?

I also see in your screenshot that it appears to have read the QR code regardless. Is that correct? Or did you select the material manually?

I selected it manually. So far I haven’t had any success with the auto detection. If I get a chance I’ll try with one of the smaller leather pieces since I think I can actually get the QR code positioned where the camera can see it.

ETA: Tried with a piece of

leather positioned inside the area visible in the GFUI and that does autodetect as it should. So definitely seems like the camera can’t actually see the QR code on the larger pieces.

If it was me I wouldn’t bother testing anything else at this point. Seems pretty clear you’ve got a real issue that will need to be addressed by Support staff.

Also, is that a P-51 Mustang flying over your 'forge?

Also, is that a P-51 Mustang flying over your 'forge?

Close! It’s actually a P-47, which I always loved more than the P-51 for some reason despite (or maybe because of?) them being considered rather ugly in comparison.