Is the Proofgrade Maple Plywood Brittle or Fragile?

I’m trying the Proofgrade Thick Maple Plywood for the first time and I’m finding that it seems to be very brittle and easy to break. Is this the nature of the material or do I just happen to have a bad sheet? I’m not a wood worker, but I’ve been reading that grain direction may have something to do with strength regarding the cut direction?

Attached is an image of some robot arms I made for a toy project I’m designing. Size wise, they fit into a 2.75" x 1/75" bounding box. They break in the areas that are the thinnest, at 1/8" -1/4". They break while simply trying to remove the protective tape! So not much pressure at all. The surface designs are symmetrically engraved on both sides, so I’m wondering if thats weakening the material? I’ve been prototyping with the Proofgrade Draftboard and dont have this problem. But I do understand that its a different material.

I’m wondering if I should use the solid Maple instead? Or laminate two pieces of the Medium Maple Plywood together?! Is this the nature of the product or a defect? 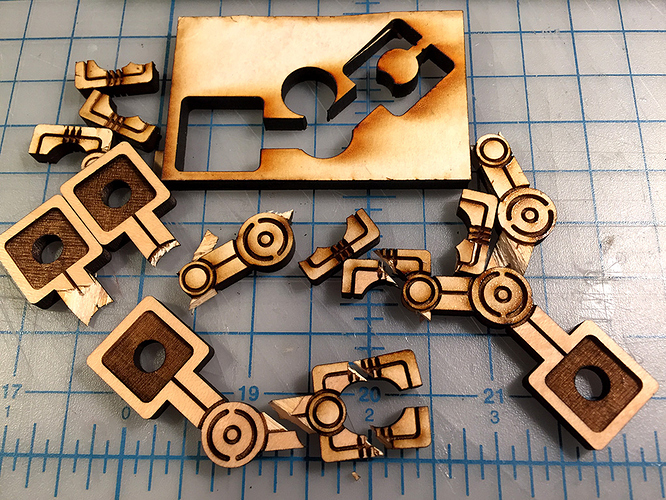 I’ve been prototyping with the Proofgrade Draftboard and dont have this problem. But I do understand that its a different material.

FWIW, the Proofgrade plywood’s are draftboard with a veneer layer and then finished.

I haven’t found it to be particularly brittle at all, but humidity levels and exposure or age might impact it, and also how you are weeding it.

When weeding the masking tape off…start at one corner, peel a little bit up, and as soon as you can grab it, pull it back on itself…almost parallel to the board. Don’t press down on the board and pull up on the masking.

You might be able to use a little wood glue to reconnect an occasional cracked part, but that one might be too far gone.

Oh yeah, looking at the pics again…that’s an awfully deep engrave. You can get a dark shallow engrave by keeping the power at the setting you are using, but reduce the LPI. It won’t burn away as much material.

The plywoods are meant for show, not structural strength. You may want to try a true Baltic Birch or even a cheap 3/16-1/4" DIY Big Box store plywood. Basically, you want something with layers of wood, instead of two layers with a mdf core. True Baltic Birch (many places in the US may label plywood as Baltic Birch, but it is not) will cut pretty true on the glowforge. Cheaper plywoods will mostly cut. Generally a utility knife will free the piece when it is not 100% cut. If this is a problem you can always re-cut. The cheap stuff is cheap, so it’s more about frustration than money.

Note that the hardwood plywoods you’ll find at places like Rockler & Menards, as well as the proofgrade, will all be veneer over mdf. There may be some high-end and specialty plywoods that are all wood layers, but probably not affordable. The hardwood plywoods are meant for cabinetry or cabinetry-like projects, not for structural/load-bearing projects.

I noticed that the same shape cut from medium cherry ply and thick that the thick actually weighs less than the medium, suggesting a different core composition.
If you can adapt your design to it, you might try the medium and see if it suffers the same characteristics.

One other thing, I cut out a lot of pieces from 3/16" plywood, glued them together (two layers) with wood glue and still had issues with them snapping. Looking at your pieces, they appear to be about a centimeter in width. Mine may have been a little narrower, but depending on the direction of the force applied you may still have strength issues.

I cut things on medium maple ply that were no wider than what you’re doing. None of the etching, but still. I agree with @PrinttoLaser. Maybe give the medium maple a shot.

Thanks everyone for your responses! Initially the pieces broke as soon as I lifted a corner of the tape. Then I just started strength testing the my other similar pieces and they all broke with very little pressure. The robot arms aren’t intended to be load-bearing, but they are supposed to rotate by being manipulated manually. I just dont want them to break when being handled.

I do like the Proofgrade Draftboard, I just want to try something with the same strength, but nicer finish. I suppose I can try something to make it nicer? Maybe a clear coat or finish of some type?

The arms do need to be 1/4" in thickness, so I’ll try laminating two Medium Maple Plywoods together and lowering the LPI of the engrave. Then on to Baltic Birch if that doesnt work .

I suppose I can try something to make it nicer?

1/8 " Baltic Birch with Proofgrade Veneer can get you what you want with much stronger innards or there are many veneer plywoods with nice outsides and actual plywood innards.

the pieces broke as soon as I lifted a corner of the tape.

I’ve used a lot of the PG medium ply, and never had it break THAT easily unless it was scored too deep.

Initially the pieces broke as soon as I lifted a corner of the tape. Then I just started strength testing the my other similar pieces and they all broke with very little pressure.

I’m with @geek2nurse on this - they shouldn’t snap that easily.

Thanks again for all of your responses! I went ahead and tried laminating two Medium Maple Plywood sheets together (after cutting) and it seems to be strong enough. Then I tried a lighter engrave at 170 LPI (originally 270 LPI) on the Thick Maple Plywood and it still broke. Also I noticed that the label on the sheet says “Proofgrade (Beta)”. I havent looked that up yet, but I assume this version was being tested. Should this be reported?

Also, again I’m no wood expert, but I think the Thick Maple Plywood actually has a plywood core not MDF? It seems to have grain running in a certain direction vs Thick Draftboard which has pulp-like fibers. Am I wrong? Indecently, it took a set of pliers for me to snap the Draftboard. 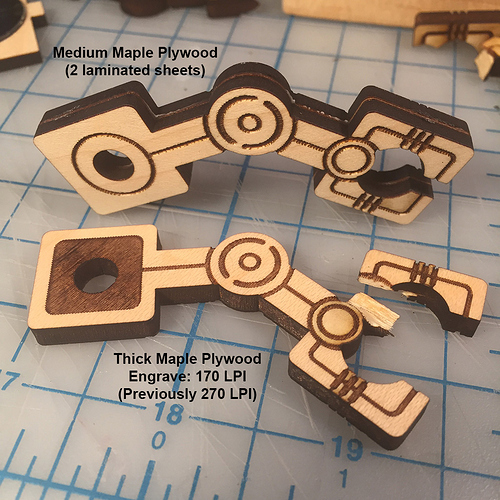 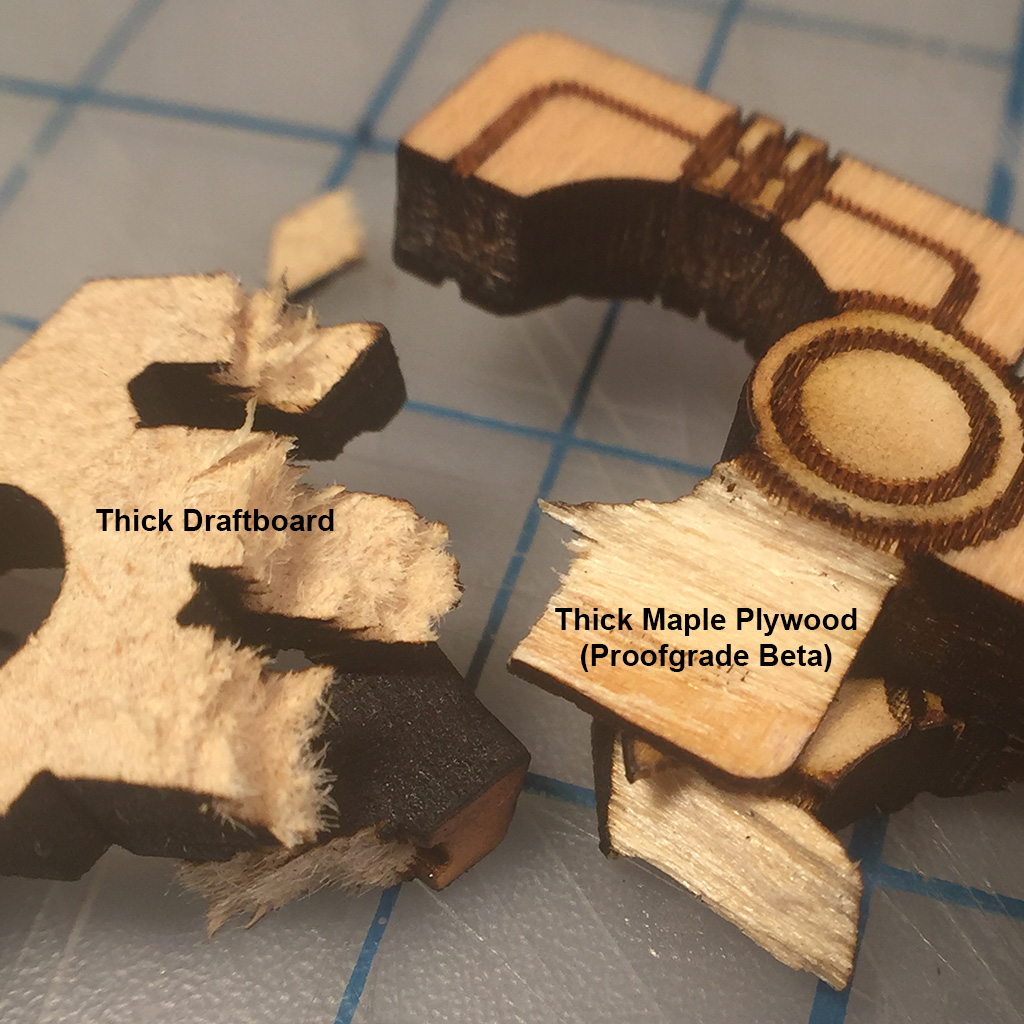 It seems to have grain running in a certain direction vs Thick Draftboard which has pulp-like fibers. Am I wrong?

Yes actually as if you look carefully at the photo you can see that you did not cut all the way through the maple ply and the draftboard lies just under where you cut,
Like so many things all the force is moved to those outer skins and if you lose one or both skins stuff gets pretty weak. If you get actual plywood with 3 or 5 plys you can see the plys easily,

If you check out the Oak ply at Lowes there is similar wood all the way through, so even deep engraves look pretty good. The stuff sold as “Revolution” or “Lauan” plywood has a paper thin surface and bright white wood underneath, and at best is not nearly as strong as the oak, but if you paste veneer over it the result can be excellent. Even with out such treatment, they cut nicely but engraves not so much.