Is the variable power linear?

Hello everyone,
I am still learning about what my Glowforge can do. I’ve done some engraving and had some weird results. I want to use the variable power method, but when doing test strips on wood, the color didn’t seem to fade linearly as expected. That may have been partially due to the masking, but there even seemed to be an S-curve in the color instead of a linear fade. I decided to put that on the back burner, but then this weekend I was testing engraves in acrylic and realized that there really is something off here. Here is the image that I gave the Glowforge;

it’s a straight fade from black to white. The result was not a smooth fade in depth. Investigating further, I found that the most obvious errors occur between 55% and 70% power. Here are the results of engraving the previous image repeated 5 times in the same place (taking breaks in-between to cool the plastic). With each engrave, the errors became more apparent.

2.jpg2031×492 1.29 MB
I’m wondering if anyone else has noticed this or if anyone can replicate it with their machine. Here are the settings I used. 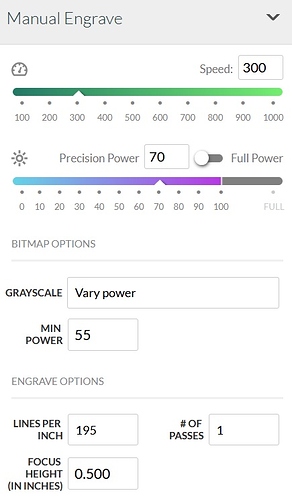 PS I saw some discussions about the grain and banding that is visible in engraves. was there ever a solution to that?

Also, if this post is beyond the manual, feel free to move it there.

Those images confuse me a bit because I can’t tell exactly what I’m looking at… is that being shown with the engrave on the top side or bottom side?

Sorry about that.
We are looking down into the cut just as it sat on the crumb tray. So the deeper part, 70% power, is on the left and the the right hand side was cut 55%, I expect. does that help?

“straight fade”… someone posted a while back about the way that graphics programs create gradients being non-linear in themselves. So I am not sure if the variance you’re seeing is a result of the hardware or the image. Sorry, I cant find that post right now, but you might want to verify that your gradient is linear if you haven’t already?

Furher reading, but not the post I was thinking about. Dang, where’d that go?

I have a question on engraving Everything Else

The problem is that you’re using gradients. Gradients are generally not linear, they are compressed at the ends, and wide in the middle. That is, they change from black to dark grey over a short span, from dark grey to light grey over a long span, then from light grey to white over a short span. When used as a depth map, this produces a curve. To create a straight bevel, you need a linear depth map. Personally, I would ditch the gradient fill entirely and blend between lines (Blend in Illustr…

That probably won’t be easy to do on initial production machines. Dan has said that linear depthmap gradients translate to very nonlinear depth cuts, and that a lot of fiddling with the Photoshop curves function is needed. He never really said whether or not he was able to achieve anything near a planar sloping cut. Plus, on any material that is not homogeneous, it will be very unlikely to be possible at all.

You just linked it. You can get a linear gradient effect using the Blend tool in Illustrator or the Interpolate function in Inkscape. (The original from @wbgraphic.)

No tutorials on using them but they’re pretty straight up functions. (Don’t forget to rasterize your gradient when you’re done creating it.)

Hmmm. My eye dropper tool seems to verify that my gradient is linear. also I have reproduced this several times, and after measuring with calipers, the “hills” are always in the same place, so I don’t think it is a defect in the material. Did Dan have a solution or an alternate curve we should be using?

graphics programs create gradients being non-linear in themselves

It depends on how you create it. I looked at the values in Photoshop and it seems to be linear (though I could be wrong).

One aspect of this is that it sounds that you’re squeezing in 254 values (pure white doesn’t count here) over a power range of 15-something units (we don’t know what the units are).

We are looking down into the cut just as it sat on the crumb tray. So the deeper part, 70% power, is on the left and the the right hand side was cut 55%, I expect. does that help?

it’s kind of an optical illusion (to me, at least).

I’m not sure on the hills. It’s hard to see what the ‘value’ of the error even is/how much error there is. I think that I would try removing the masking for sure, to eliminate a variable.

I swear I saw one with pictures and field tests. Oh well.

I should have clarified that the wood I mentioned was masked but my acrylic was not.
Thanks

I’d also look at getting the focal height set correctly. I assume it was defocused to try and get a smoother engrave?

I know some have had success with defocusing (on acrylic), but I’m not sure if that was on 3d engraves, vector engraves, etc. It seems like a whole lot going on in one test.

I just set the focal length to the top of the material, .5".
I did not change it for successive engrave passes.

Ok. So not Proofgrade acrylic. And it was pretty thick.

Did you do only this one test? Or other tests on other parts of the material?

Yes, I preformed several tests on two different pieces and the other results matched. I actually tested 0% to full power and a few other ranges to narrow down where the problem is.

Vary-power is meant to be used with a grayscale design. I wonder what would happen if you converted the image to an actual grayscale and tested with it, as opposed to RGB.

Thank you for helping me think this through. Let me know if you have suggestions for other tests.

Also, if anyone has any scrap material and the time and desire to replicate this test, I would be very interested in the results.

It’ll probably get bumped over to beyond the manual, but these are fun to think through.

Oh, I can do grayscale. I’ll get back to you.

@mpipes does a lot of acrylic. He might have some ideas.